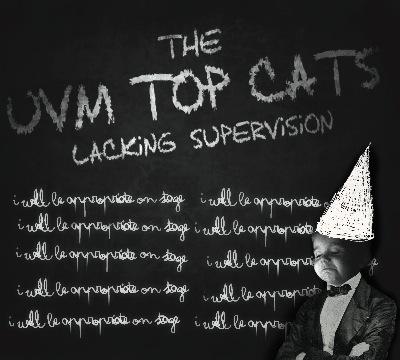 Whoa, where have the guys from the University of Vermont Top Cats been all of this time? From what I've been able to discern, this is the group's third recording and boy is it a doozy. Equal parts melodious jazz and infectious pop music, Lacking Supervision is an album that will please almost any musical palette.

Opening with a snippet of How High the Moon, the guys present us with a richly textured choral arrangement that pops with the "k" sound of "music". Believe it or not, I thought it was very daring for a group to be so choral in the collegiate landscape of today. And with that unified phrasing, I was completely smitten. It got a '4' because it was only thirty-two seconds long. Come on guys, at least give us the gloriousness of the full song as a hidden track. That would have really been a bonus.

The rest of the album has a track listing of the more expected repertoire from a college men's group with some really rocking pieces scattered in the mix. But right from the start, the realization that these boys can sing is fully evident. The balance is amazing between the voice parts, with basses that remain lush and supportive throughout; the inner voices provide solid blocks that propel each song forward without distraction and the upper voices soar without screeching or overpowering the rest of the song.

I love how How High the Moon bleeds into Heartbreak Warfare. The arrangers repeat this with the mashup Reading Rainbow/A Milli that has hints of Lollipop poking through certain sections before transitioning fully into that song's own track. Kinda genius and brilliant without being cloy or coy.

The production is superb and may have a lot to do with the overall quality of the album. Nick Girard (of Overboard fame and the glorious Beatles tribute album Help) is thanked profusely for the work he did on the album, and it's great work indeed. The production makes the album robust and vibrant. Girard has produced a richness to the sound on most of the tracks that provides a great aural soundscape. Both How High the Moon and Reading Rainbow/A Milli seriously fill up the room with energy and lushness — seemingly dichotomous attributes, but nevertheless true.

The reason for the "good" score is because the album starts sounding a little repetitive during the second half. The repertoire that has become standard male a cappella songs is standard for a reason. And boring as all get out. 21 Guns is a little plodding, but the soloist captures your attention and never lets the song get too boring. But You Found Me sounds like In Love With a Girl, which sounds like I'm Yours, which are all better than the oddly misplaced and overproduced Momma's Boy.

Though I give kudos to the gentlemen of The Top Cats. This album is worthy of the general population's attention and adoration. It's really good music from a group that I can't wait to hear more from.

In my travels as a reviewer, I've come across many good all-male collegiate groups who have put out albums that are produced pretty well. Indeed, the sound has become so prevalent that I think it may be turning into a genre unto itself (average-guy a cappella, perhaps?). You know the sound — crisp, in-tune backgrounds, tight copy/pasted vp, not a ton of emotion or energy, and leads that sound like that guy who used to play Wonderwall on the guitar before choir in high school. I've heard so many of these albums in fact that I've begun to wonder what these average groups might sound like if produced really, really well. I think Lacking Supervision is my answer.

What's familiar? Well for starters the set list. I'm Yours, Fix You, You Found Me ... the liner notes could double as a checklist of "what college all-male groups covered last year". Most of the leads are karaoke level: perfectly pleasant, but nothing to make you hit repeat. Arrangements get the job done. Vocal percussion? Perfectly sliced and diced.

Yet for all the standard elements here, Lacking Supervision has a shine to it, a certain sonic polish missing from most of its contemporaries. Credit mastermind Nick Girard, whose vision and mix-work elevates the Cats' sound beyond just good into moments of interest and real excellence.

Right off the bat we get the wonderfully atmospheric Heartbreak Warfare, with its tight, yet still clearly vocal bassline supporting a great cascade of beautiful barely vocal bell tones. Later on we get a great contrast in the super tight, electric Momma's Boy. The track walks the line perfectly between college-guy funny and genuinely exciting (some Auto-Tune solo flourishes add ear candy to what is otherwise a pretty vanilla melody). The third act lands with Lollipop, and an octave bass you have to crank in your car to fully appreciate. Finally the album comes home with MGMT's Time to Pretend, with vocals warped beyond recognition to amazing, authentic effect.

Girard's approach suits the group best on songs with more space (21 Guns soars, but In Love With a Girl misses the right level of rock grit and punchiness). Still, he weaves some serious gold out of straw. The Top Cats seem nice enough, and songs like the mashup of Reading Rainbow/A Milli show that they have a sense of humor, but the excellence here really comes from the mixing board.

Lacking Supervision feels a little too safe in its song choice and energy to be ranked among the greats, but it's still a very solid release. Paired with Girard, The Top Cats are on the right track, but they need to bring some more interesting material to the table (both in arrangement and song choice) in order to really excel.

Despite such a polished sound, Lacking Supervision has a few issues that make it only slightly better than average. First are the group's arrangements: songs with (what should be) really percussive chords — namely, In Love With a Girl and 21 Guns — just sound blurry here. That choice instantly saps the intensity from these tracks — in the originals, it's that precise sound that propels these songs forward; without it, the Top Cats' versions severely lack energy. This is a group that is capable of such a pointed sound. The jubilant chords on Ruby, for example, sound great (it's the syllables in the background that are that song's weak point).

Another challenge for the Top Cats is dynamics, especially on slower songs. Heartbreak Warfare, You Found Me, and Fix You all sound good at times, but these songs never grow or move in a way that tells a story. Perhaps due to dynamics, Fly Like an Eagle feels really slow.

Lest it sound like Lacking Supervision is a total snooze (and even on its weaker songs, it isn't!), we should mention the good moments here. The mash-up of Reading Rainbow/A Milli folding into Lollipop works surprisingly well, and the group executes it flawlessly. Time to Pretend captures the fuzzy energy of MGMT's original but would sound great even to those not familiar with the original song.

Ultimately, the group can capitalize on songs that have their own innate energy. It's the songs where the group has to channel energy from within that falter.