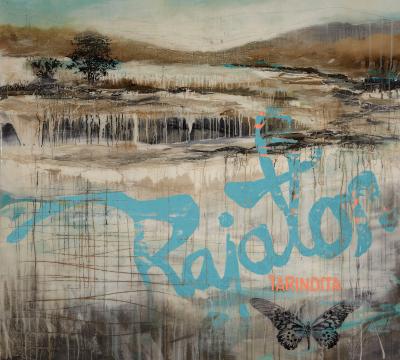 As long as Rajaton continues to make music, you'd be well-advised to listen to it. And in the case of Tarinoita (meaning "stories" in Finnish), you should be especially sure not to miss it.

In several ways, in fact, Tarinoita is everything I hoped Maa might be but wasn't. The group once again relies primarily on lyrical inspiration from traditional Finnish poems as well as works from well-known Finnish poets. But sprinkled throughout are some English works based on material from Christina Rossetti, Stephen Hatfield, and even early Elton John. Once again, we get lyrics for everything so the non-Finnish and non-English speaker alike can get an appreciation for each song's subject matter. And perhaps most importantly (and unlike Maa), we're back to the wildly inventive style that first hooked me on Rajaton nearly a decade ago.

That creativity, flair for variation, and appreciation of musical subtlety just cannot be overstated — perhaps all the more because it is a rare quality indeed that is so often lacking in other professional groups. Surma (meaning "Death") may have won the CARA, but for me, a song like The lament (of my heart) (my personal favorite) is a wonderful microcosm of everything these folks do oh-so-well. First it's a lovely song by Rajaton's frequest collaborator, Finnish composer Mia Makaroff. Second, the arrangement accentuates and enhances the shifts in tonal feel from minor to major and back to minor again as suits the lyrics which similarly alternate from imagery of dark desperation to that of a sort of defeated hopefulness. Thirdly, the arrangement never gets old even though the lyrics have a repeating refrain. Each iteration of the verse brings with it a new interpretive nuance or creative idea that keeps the listener engaged and enthralled. (The ladies at the top of the 4th verse in particular are so simple yet so perfect.)

As much as I love this group, I've not shied away in the past from providing fair warning to the uninitated about buying a Rajaton album, which might prove to be a difficult listen. But with the same wariness that I may have cautioned you with in the past, it's with real enthusiasm that I encourage you to go out and get Tarinoita. It may take a few listens to fully appreciate what this group can do — and how much these singers are in fact doing — but you'll be that much richer for the experience.

If you're new here, you might have missed the fact that we here at RARB typically love Rajaton's albums. (Seriously: if you go back through all the group's releases from 2002 to 2007, the one blemish in Rajaton's streak of 5.0 overall scores is an admirable 4.7.)

Tarinoita is the group's latest, and it certainly maintains the high bar that Rajaton has gotten us used to. The singers switch between English and Finnish, all with the same beautiful voicing, arrangements, tonality, soloists, and (most importantly!) dynamics that we've all come to expect from them. I need you to turn to isn't super exciting lyrically, but the group takes us on a stunning journey in the song, eventually dropping to a chill-inducing whisper that grows back to a nice warm level. Album-opener Onni is so haunting that I forgot I was listening to an a cappella song. The beginning of Aurora shimmies with a sassy groove. And there are so many wonderful elements in the arrangement of Kaivo — from moans to joyous yelps — that the song builds an engaging momentum. There's so much attention to detail here — without forgetting the song's "big picture" — and that makes the album a real joy to listen to.

Still, Tarinoita isn't completely perfect; there are three things I think the group could improve. First, make sure that every soloist is perfectly suited for every song. That may sound obvious, but the ending of The lament (of my heart) is way too low for the soloist, and her husky moan just gets lost, which is a shame, since the rest of the song and the backing voices are gorgeous. Secondly, the nature noises on the album, especially on the song Satakieli Monrepoossa, are a bit much. They're a nice start to the song, but they get a little loud (and distracting) elsewhere, especially over headphones. And finally, as beautiful as Rajaton's dynamics are, I wish the group had pushed them even farther. The singers get down to a whisper, but they never grow to a full roar, leaving Tarinoita feeling like it's stuck at a middle volume. They do great things here — the dynamics within every phrase are fantastic — but this is a group for which even 'great' feels like settling. Still, Tarinoita is a thoroughly enjoyable listen — and one well worth hearing.

The Finnish group Rajaton brings us an interesting collection of folk songs in its latest release Tarinoita. Only four of the twelve tracks were in English and I found the language barrier to be more of a problem than I wanted it to be. Despite the difficulties of language, Tarinoita is still a good album with a couple of tracks placing themselves deservedly in the "Excellent" category.

Let me start off by saying that this album is very well sung and produced. It's a polished, professional-sounding album from top to bottom with flawless tuning and blend. Tarinoita won 'Best Folk Album' in the 2011 CARAs, and Surma won 'Best Folk Song'. Well deserved, I'd say. I really just wish I knew what the group was saying. It's awful and terrible and I wish it wasn't the case, but I feel a strange disconnect from the singers when they are using their native tongue. The music is technically impressive and beautiful (for the most part), but I found it impossible to really get into it.

Fear not, though, because this album is totally worth it for the last three tracks. Surma is by far the best album on the track simply for the fact that it reaffirms that Rajaton is a group with no boundaries ("rajaton" is the Finnish word for "boundless"), from the quick-paced and layered snapping intro to the creepy haunting nature of the rest of the track. The following track Kaivo is not as excellent but is pretty darn close to it for pretty much the same reasons. For these tracks, there is no need to understand the words because there is feeling and emotions translated through the music. While I may not understand the words, I understand the music.

I personally don't normally flock to folk/world albums, but there's something about Rajaton that catches my attention. The album is forty percent average, forty percent good, and twenty percent freaking awesome. If for no other reason, this album is worth the listen for Surma and Kaivo.