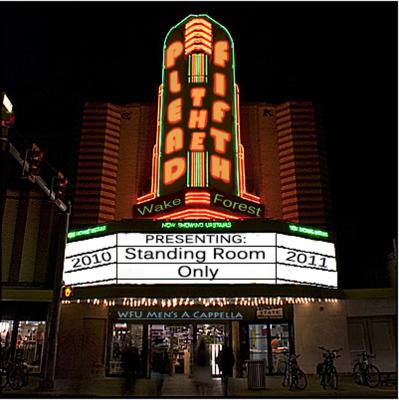 Fairly or unfairly, a track list that includes such tried-and-re-tried chestnuts as Circle of Life, I Want You Back, and Somebody to Love, as well as karaoke standards like Desperado and One, does nothing to raise my level of excitement for reviewing a new album.

It's to the credit of Wake Forest's Plead the Fifth, then, that although Standing Room Only (only the group's second disc) has its fair share of missteps, the whole is greater than the sum of its parts. Generally speaking, it's a reasonably satisfying listen provided one doesn't listen too closely or critically.

Rhythm and production are really the album's strongest assets. Give these guys a driving (Circle of Life) or bouncy (I Want You Back, Forget You) rhythm and they'll deliver some fun aca-syllables. The music is also bolstered by sampled and sequenced vp that moves beyond the standard kick/snare/hi-hat/crash, and layers in conga drums, tom-tom rhythms, claves, and other percussive toys. In some cases, the background syllables may be a little too complex for the group's own good and draw a little too much attention to themselves (Africa), but at least it's something different and interesting for the ear, which is helpful when the chosen song has been covered so many times.

Variation in arrangement, however, is probably one of the two most prominent weaknesses, and it's evident on nearly every track. As engaging and impressive as the opening of Circle of Life is, once it settles into the signature rhythm that we all know and love, it stays there pretty much throughout the entire song, simply plodding along from chord to chord. It's a very lush, full treatment to be sure, but you've pretty much heard everything there is hear by the end of the first verse and chorus. Ghostbusters Theme is essentially a song made up of two very well-known horn riffs that repeat over and over, and that's exactly what the guys deliver. Nothing more, nothing less. It's faithful certainly, and instantly recognizable, but almost entirely uninteresting. And while we're on that topic, I applaud Plead the Fifth for a hip-hop medley that sounds remarkably like its source material — taken as a whole, your friends would be impressed that it's all voices — but specifically as vocal music, it's about as bland as it gets.

Dynamics — or more precisely, the lack thereof — would be the other major sore spot for me, and it's perhaps even more troublesome because unlike arranging, it's entirely within every group's ability and control if they just bother to pay attention with their ears. A plaintive, simple song like Desperado doesn't stand a chance in a slavishly literal, transcriptive arrangement (like the one offered here) if, at the very least, the performance doesn't take us on some sort of journey from beginning to end. If nothing else, dynamics would be a way to accomplish this. Ditto for Lost? and ditto for Africa, where the absence in any sort of shift in dynamics between the verse and the chorus leaves the entire song lifeless, and almost mechanical in its monotony.

With all of this said, I started by suggesting that the whole was greater than the sum of its parts and that is indeed true. It's not an album for aficionados but the casual listener with an affinity for the material covered here would probably enjoy it a great deal. I, on the other hand, am putting these gents on my "to watch" list, with the hope that they can take a step forward from just slick and fun to truly creative and interesting.

Laughter isn't always the most appropriate response when listening to and reviewing an album. But alas, it was the first response that occurred while listening to Standing Room Only by Wake Forest University's newest men's group, Plead the Fifth.

Not that the album is in any way funny because it is so bad. In fact, just the opposite is true — Standing Room Only is pretty pleasing overall. There is some really energetic singing, some adventourous arranging (both homegrown and borrowed from others), lush soundscapes, bright and buzzy production, and quality musicianship in the block.

But oh my gosh, you look at that track listing and you can't help but start to titter. Really, both Circle of Life and Africa? As bookend pieces opening and closing an album? "A-F-R-I-C-A!" for the love of Haysoos, WTH? Plus there are some definite throwbacks with I Want You Back, Somebody to Love, Desperado, and One. Not a very challenging or innovative song selection here. So these guys had better bring their A-game to some of these worn-out classics.

And then the opening track begins and your inner adult starts to chastise the idiot critic for having preconcevied notions about a group and a particular track sight unseen. Because this is fantastic; Circle of Life has one of the best renditions of the song's opening that I've heard. It's warm, exuberant, and expressive in the right manner that an ode to birth should possess.

VINDICATION! The solo starts and the guffawing begins uncontrollably. The soloist and the song do not match up in the slightest. Not. One. BIT. That's not to say that bassist Aubrey Gordon is a bad singer or has a laughable voice; his duet on Desperado is absolutely gorgeous, and he is competent on Africa. But Gordon definitely wasn't meant to be singing a song that opens with an African chant. There is a lot of scooping going on, and some very wide vowels, but what it boils down to is that the background is giving you a fullforce musical theatre version with Lebo M and Tsidii Le Loka as the leads, whereas our man Gordon is definitely feeling the spirit of his Elton John roots.

And then the group closes with a 2011 version of Africa. I have to say a 2011 version, because I don't think we were considering the syllabic phrases "ein ya na na win yeh/neh/deh" (depending on which time the basses sing it), and "chimma chimma chibba chibba chimma chimma chimma way now" for the familiar opening phrases. Granted, this version was originally arranged for the Roxbury Latin Latonics — a group I'm not familiar with but definitely want to hear more from — and it's pretty fun. But sing either of these phrases out loud and get back at me as to what happens almost immediately.

What's sandwiched between the bookends ranges from ho-hum to eceletic to sublime. The arrangements are pretty fun, though the half that were originally arranged for other groups are more inventive than what's all theirs. The group has made me want to listen to more of Dispatch's oeuvre considering how well it does with Hey Hey, and actually makes Coldplay relevant again with Lost?.

I can't get over how great the group sounds singing together. Some of that is in part because of the herculean mastery of production that is Dave Sperandio. But, truth be told, it really sounds like these guys just know how to sing as a choral group. The balance, the blend, and the block intonation is spot on. So kudos to these guys for being a "singing" group.

For the future, I hope the group will focus a bit more on expanding its repetoire outside of the pop standards of male collegiate performers from yesteryear. Laughter is good medicine. And even though certain tracks made me laugh out loud, this is an album worth getting and appreciating the talent that is readily apparent. It truly does a body good.

Mediocrity is nothing new among a cappella groups, and Standing Room Only from Wake Forest's Plead the Fifth doesn't overcome this fate. What makes this album more difficult to listen to than most other average albums is the quality of the soloists. Leads are — almost universally — flat or notably shaky on their high notes (the most egregious culprits are Desperado, One, and I Want You Back). Even without the pitch issues, leads are not well suited to their songs, which is something that many other mediocre groups seem to get right.

Plead the Fifth's problems don't end with the leads, though. Arrangements are frustratingly simplistic — distractingly so on One, repetitively so on Lost?, and lethargically so on I Want You Back. (Seriously! I Want You Back is supposed to be a fun, sassy tune, and the overly long thirty-second intro is just tedious.) It should be noted that two of the songs I cited were not arranged by Plead the Fifth members, but the complaint still stands: it's OK to get arrangements from outside sources (and Plead the Fifth definitely credits the original arrangers and the original groups), but when a group pays for existing arrangements (i.e., not newly-commissioned ones), the simplicity/quality of the arrangement is known in advance. The group doesn't help itself with dynamics either. There's some effort with dynamics on Desperado, but the song could've been pushed a lot further. The same is true song after song.

The group does well when it can show that it's having fun. Ghostbusters Theme is one such example, although that track is too long and repetitive. The other track that stands out is Hip Hop Medley — each of the sections works well, the arrangements are modestly complex, the soloists sound good, and the group overall just sounds like it's having fun. The track is not without its faults — transitions among songs aren't smooth — but Plead the Fifth has stumbled onto something enjoyable with this track. It's this energy that the group should focus on and work on expanding into every song it records.

You can have all 11 tracks of Standing Room Only for a very affordable $7.99 on iTunes.