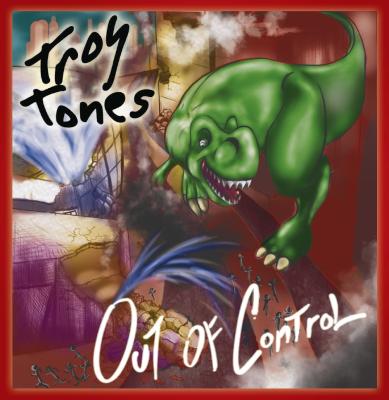 2006's Goodnight! had an average RARB score of "1.7". 2008's Too Soon? delivered a vastly improved average of "3.3". 2010's Out Of Control continues the Troy Tones' path to improvement while retaining their theatrical approach to music.

Of the 2008 Troy Tones this reviewer wrote, "The USC Troy Tones instantly remind one of the excitement, energy and musical theater nerdiness of the hit TV series Glee. Soaring voices conjure images of dramatically outstretched arms and Disney-sized eyes. The Troy Tones aren't devoid of pop sensibility, but their brand is that of contemporary Broadway, even when their song choices are pop and classic rock." Out Of Control hasn't made major changes to that formula, though the male leads do lean just slightly more towards pop rock.

"Like many collegiate groups, the Troy Tones employ some syllable choices in their arrangements which are slightly more comical than intended. However, when the arrangements reach homophony, the Troy Tones display a blend and richness of tone color that is truly excellent. In combination with their stellar leads, these moments mar Too Soon?'s high points. The disparity between these moments and the aforementioned less successful ones is significant." Out Of Control largely follows this formula as well.

What has changed are the ratios. The most enjoyable moments simply make more frequent appearances. And that's a step in the right direction.

A smidge cooler than cabaret, the Troy Tones' soloists are theatrical and impassioned. The women sometimes evoke the broad beltiness of '80s band Heart, while the men display boyish grit in the baritone range and open clarity in the tenor.

The Troy Tones' rhythm is a bit troubled for a modern recording: though the percussion has been locked to a grid, the rest of the group, in its excitement, occasionally rushes right through those grids to jarring effect (Peace of Mind) and somewhere between editing and production that could and should have been fixed. But even when the group is in the pocket, all the parts fail to lay into the same pocket (Downfall, Penny and Me, Believe).

When the songs call for outright theatricality, the Troy Tones are truly in their element (Circle of Life, The Show Must Go On).

When the scores don't measure up, it's usually a result of some disjointed detail — distracting back-up syllables, rhythmic issues — that might easily be overlooked in a live show. Details simply matter more in recordings where everything is laid bare for the listener. But overall, the tracks do crest over from average to good, and for that the Troy Tones deserve kudos.

Speaking of details, the Troy Tones' liner notes fail to credit any of their songs' composers. I strongly urge them to correct this oversight on their website, in the mp3 data and on future recordings.

RARB doesn't have a category for believability or intimacy. But, now that the voices themselves sound as good as they do, this would be the area for the Troy Tones to focus on. Listening to these singers is a pleasure, now use those voices to pull us in and take us on a true artistic journey.

Out Of Control is a fun, engaging album, largely because the young singers who comprised the 2009-10 USC Troy Tones sound truly committed. (From the look of certain pictures in the notes, they ought to be! Ha ha! But I digress.) Nearly every note and vp noise sounds rich with intention. Most importantly, on most every song the singers seem to be in complete agreement with each other about what they intend.

Now, part of this is probably due to the fact that the album's two producers, group members Matt Harkenrider and Ricky Parra (both '10), also arranged all eleven tracks; the notes don't list group officers, but I'd guess that one or both must have been music director. Likewise, the consistency is likely due in part to the sensibilities of recording engineer Christopher Given Harrison (famously of Sonos) and of Bill Hare (famously of more CARAs than I speak languages), who mixed and mastered.

Underlying the consistency, however, and giving it variety; and making the characteristically high-quality sonic sheen something more than a fabulous surface, there was a group of singers who clearly, audibly loved singing together. I imagine the 2009-10 Troy Tones must have been roof-raisingly spirited to see in person for any recording — even this high-quality recording — to sound so much like a group loving, simply and deeply, what it does.

Thank goodness, then, that what it does, what it intends, is music of high energy, generally winning story, and a good deal of relatable feeling (not to say: cheese)! I had fun listening to the group, and had the very desirable feeling of wanting to talk with them about their music, preferably at a relaxed after-party. If there's a tenth anniversary reunion, I'll crash. In the meantime, I recommend this album.

Some specifics, including some quibbles. The tracks are nicely sequenced overall, although doubtless one can disagree at points. I personally disliked Queen's The Show Must Go On as clean-up hitter: I found it too brash and unconvincingly cynical, as well as too long, after the more positive Circle of Life. I think that This Time was also allowed to go on for too long, with too few substantial changes in texture to alleviate the length.

Songs and soloists are generally very well matched. Even when not quite matched, to my ears there were no irreconcilable differences. Many group members take a turn and some are, as usual, much better than others. I especially liked Allison Robbins, winsome and strong on Peace of Mind; and Barbara Loll, although I feel that Cowboy Casanova, by nature lacking meaningful development, was a waste of her and the group's talent. Sara Smith beautifully leads a jazzy, adventurous, just-a-bit-incoherent Over the Rainbow.

Special kudos is due to Dan Kuenzi for his vp (as well as to the producers, recording engineer, and others for getting it to "tape" so well). He's crisp, pocketed, and inventive without coloring outside the lines; he grounds the group's sky-high with driving force. That said, there are times when the group is indeed on the verge of out-of-control, including ironically on Kuenzi's solo track Penny and Me, generally a bit too fast for comfort and in places showing real misalignment among parts.

The USC Troy Tones fall squarely into the wide band of average collegiate a cappella. The group's latest album, Out Of Control, sounds good, and things are generally in tune, but good pitch and a polished sound are the norm nowadays.

Where the group falters is in its energy — there's too much of it. That might sound like a weird complaint, but every song is dialed up to 11, leaving songs with very little room to grow and breathe. These arrangements are rich and full, and that causes the unfortunate problem of distracting from the soloist. Songs like The Show Must Go On and Cowboy Casanova are supposed to be sultry, passionate, and sexy, but instead they sound as though the soloists were competing for airspace with the backing voices behind them.

Speaking of the backing voices, syllable choice was a common complaint among the reviewers for the group's prior album, Too Soon?, and that issue still stands here. Syllables are often way too literal and distracting (the bass line of the first track, Peace of Mind, is a too-heavy "doom bah dah daaaah daaaah", for example), and the group would be well served to find softer, gentler syllables that convey sounds and tones instead.

There are a couple of good moments here. Penny and Me is a bouncy, fun song that is clearly the best on the album. Singer Dan Kuenzi sounds so much like Rob Thomas on Downfall that you won't need to check the liner notes to know that it's a Matchbox 20 song. (Kuenzi does vocal percussion on all other tracks here except one, which is an interesting choice given how strong of a vocalist he is.)

Still, the album has more weak points than good. Circle of Life, from The Lion King, really disrupts the flow of the other pop/rock songs on this album. Believe is well executed but too long, becoming monotonous. The downtempo This Time really lags in energy and focus. Other tracks on Out Of Control sound fine but don't offer much that will truly impress listeners. This is this group's ultimate challenge: to step away from such busy, distracting arrangements and create music that truly moves both the singers and their audience.

To order this album, visit the iTunes Store or CDBaby, or email the group.