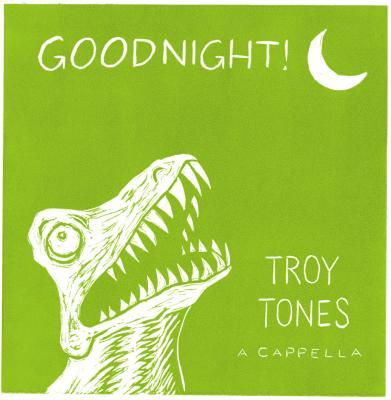 USC Troy Tones' Goodnight! is a time warp of sorts to a simpler day when getting a "clean" sound was successful production. While I'm sure many hours of effort went into this release, it's amateurish in comparison to the world of a cappella today. There is no sheen, no smoothness. And though raw energy and bold innovation are more important than slick production, the Troy Tones don't bring that to the table either. Blend is spotty. Intonation is noticeably subpar. A "blind" listen would conjure comments like "This is an ok HS group." But of course, the USC Troy Tones are collegiate, so that's not such a good thing.

The best compliment I can give is that the live tracks blend nicely with the studio recordings. If you like the one, you'll like the other. Very often, groups include live tracks that reveal the embarrassing truths that they have so carefully covered up on their studio tracks. The Troy Tones are honest — often brutally — from the get-go. So perhaps that's the real compliment: an honest sound.

Less charitably, Goodnight! is a yearbook album. The Troy Tones have recorded for posterity, the state of their group at this time. That's the kind of preaching that appeals to the already-converted. Family, friends and fans can enjoy the unexplained inside-joke laughter on Rainbow Connection, the cutesy happy ending section of Teenage Dirtbag and countless other little "I-love-when-they-do-that-part" sections. General audiences, even those that don't have musical training, are likely to wonder and wince at the troubled musicality.

With a wildly different production, many of the arrangements would have been shown off to far greater effect. As presented, parts stick out and the timbre is often weak, or grating. But the notes and syllables are less to blame than the performances and production. If RARB had an arranging category, these would qualify at least as average, and their respect for space and silence is sometimes, in fact, above average.

The bottom line is that when core elements of musicality can be described as "in and out" the result is doomed to top out at weak. Once these basics are solidified, the Troy Tones will have a fighting chance to compare favorably with the broader a cappella world. Goodnight! should be put to bed as soon as possible so that these singers can start work on a recording that shows them off in the best possible light.

From the poorly tuned opening of Mad World to the feebly warbled closing chord of the final (second hidden) track, I Miss You, the USC Troy Tones' debut album Goodnight! is a painful listening experience. I feel a little like the Mom who is presented with a spray-painted macaroni necklace by a beaming five-year-old. I want to give the Troy Tones a gold sticker for effort, but Goodnight! is going into a drawer and will not come out again.

Debut albums are always the result of a group's dedication and hard work, and I truly wish I had more nice things to say. Michael Kane is a great vocal percussionist and does it for the whole album. It is definitely just him here, none of the looping and layering so prevalent in other collegiate recordings. Songbird isn't half bad. The group seems to do a better job when holding out long chords with minimal movement. But pitch problems still creep in. Neil Vyas, whose solos open and close the official 8 tracks of the album, is the strongest soloist of the bunch, better on Push than he is on Mad World. His pitch sounds a bit off in both songs, but it is hard to know if that is his problem or an inevitable result of singing on top of the struggling tuning in the background.

The tuning issues are horrendous throughout. Most tracks don't even start in tune. Key changes, which this group seems to love but should try to avoid, agonizingly fumble upward. The two hidden live tracks are greater offenders in the pitch arena than the official tracks. The descant coming in on I Miss You could not be more out of tune, and Rainbow Connection is just off throughout. The Troy Tones' request that these tracks not be reviewed is understandable. What is not understandable is why these tracks were even put on the album.

Rhythmic precision is an aspiration. Combined with the heavy-handed, plodding arranging and the pitch issues, the end product is grating. In Teenage Dirtbag, the soloist sings "I'm a teenage dirtbag" and is followed by every part in the background chiming in loudly "I'm a dirtbag". In Fame, the "dum dum dum"s are relentless. In How Will I Know? the "jiga jiga jiga KNOW!" alternates with "chang-a chang-a"s.

Breakaway, How Will I Know?, and I'll Be There are arranged so high that the soloists have to strain to get there. I'll Be There is arranged perfectly for the male soloist, but the poor girl has to jump octaves, singing up high in the verses and down low in the choruses.

Before the Troy Tones head into the studio for their next album, they need to get back to basics. Goodnight! is the perfect macaroni necklace for the Troy Tones' friends and family, but anyone beyond that circle of folk should let this one pass by the wayside.

Oof. "Goodnight!", indeed. This offering from USC Troy Tones doesn't work at all. Bad tuning, mediocre production and unenergetic singing conspire to create a very unprofessional final product. I'm not sure what the Troy Tones were aiming for here, but I can't imagine they hit their target.

The arrangements don't do the group any favors here. The Troy Tones fall into the common trap of forcing the sopranos to do most of the melodic heavy lifting, which virtually guarantees bad results. The root of the problem is the lack of any real bass. Arrangements are cast higher, forcing the baritones and altos to sing out of range. Note to arrangers, saddling your ladies with whole notes on a high G is unfair.

As a result, the group never generates the full sound necessary to tackle the big covers they have chosen on Goodnight! This could have been solved the old-fashioned way, by electronically dropping the bass and auto-tuning the crap out of everything else. But the Troy Tones, producing the album themselves, have opted for a more natural sound.

Fair enough, but the song choices, mostly pop covers that tend to build to rocking choruses, don't lend themselves to the stripped-down production. As a result, the album feels listless. Breakaway features a nice solo by Paige Reilly, who is overwhelmed by shouting altos and baritones who are trying to rock out on notes that are too high for them. Push starts with a nice groove but fails to go anywhere.

The album features a very talented, albeit hyperactive, vocal percussionist in Mike Kane. The group seems to grasp onto his manic energy, though it often sounds as though he is using this album to audition for a different group. I'm not sure that I'll Be There is the ideal forum for a procession triplet tom and snare fills, but it's also the best track on the album, so I'm not complaining.

But some of the problems plainly result from a lack of effort. Songbird is out of tune, and the group just doesn't seem to be into it. Rehearsal doesn't cost money, and if you want people to buy your album, you owe it to your listeners to put in the time to get it right. The key change in How Will I Know? is cringe inducing, but the group does fine with the change in I'll Be There, so it isn't as though they lack the ability to execute.

And there really is no excuse for not crediting original artists in the liner notes.

The album concludes with two live tracks which strain the definition of the word "bonus". If you are going to imitate Kermit the Frog, you have to sound like Kermit the Frog. You also shouldn't break out laughing in the middle of what is really a sweet, tender song. Seriously, why on Earth is that track on this album? That said, Joe Neuhas deserves mention for taking on a difficult Incubus solo, even as the backgrounds fall apart behind him.