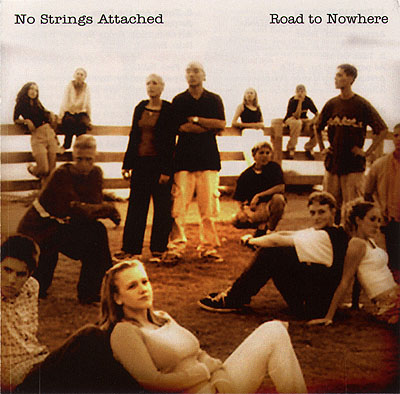 College groups, look out! No Strings Attached is the first high school group I have heard that is at least as good as the average collegiate group. And where there is one, there will surely be more to follow.

Road to Nowhere is a promising debut album for any fledgling group of new singers. The fact that it belongs to a high school group merits its extra notice. If these kids stay in the genre, they are going to bring some serious experience wherever they go, and I suspect their destinations will only be getting better. The cynical among us might say that the quality will go down once they no longer have Gabe Rutman and Brock Harris around to coach them, arrange for them and produce them. But coaches don't sing albums (Gabe's quality contributions on VP notwithstanding), and other groups have had no problem massacring otherwise splendid arrangements.

Actually, a good chunk of the arranging was done by members of the group. They even throw in one original — what great guts. Peter Froelich's Reflect fits right in with the folk-rock feel of much of their repertoire, with Peter himself turning in a sweet baritone solo. The background is a little rough around the edges and a little repetitive, but lord knows that's no great sin for pop music. Throughout the disc, the baritenors are a little heavy and the altos a bit light, but the group sound is generally not a bad listen.

Breakfast at Tiffany's is one of my favorite tracks on the disc. The kids do a great job with the waltz break toward the end, and Gabe's vocal percussion is a pleasure to listen from an album of any level. Take On Me also moves well, and Free Fallin' shows some skill with slower numbers. Round Here is quite well done and shows off another skilled transition mid-song, with a foray into what sounds like a Pearl Jam interlude.

Nice job by a new group to the collegiate a cappella tradition. That they were only in high school at the time is icing on the cake.

When you open up No Strings Attached's Road to Nowhere and pop it in the CD player for a spin, there's nothing obvious to indicate to you that this is not an album by a college group. I'll admit that it was only when I decided to look at the liner notes during about the fourth or fifth song the first time I listened to this album, that I realized that it was by a high school group from Burbank, CA.

And I'm glad I had a chance to listen to part of this album with an unbiased ear before I learned it was by a bunch of teenagers. Because as a CD by a high-school group, this is a very impressive album. Several of the arrangements are done by members of the group, and there's nothing obvious to distinguish them from the ones from their director or from outside sources. They obviously put a lot of work into this album, and it shows.

But knowing that this is a high school group, it's easier to mentally excuse some of the things I'd be more critical of if this were a college group. The singers' voices do have a younger quality than most collegiate albums. A lot of the songs are a little sped-up, which I don't inherently object to in an a cappella setting, but on some of the songs this leads to a rushed feeling, or it gives people license to cut off phrases early. Some soloists are too square, as if the solo was written out for them with the right combination of quarter, eighth, and sixteenth notes, and they're not comfortable with deviating from the notes or rhythms. And the track list is a veritable who's who of overdone a cappella songs.

But there is a very solid core to this album. Tuning and blend are good, though not great. The soloists have a nice, fresh sound and are generally pleasant to listen to. They've obviously learned from their guest percussionist for tracks 6 and 8, Gabe Rutman (also the album's producer), and put that knowledge to use on the rest of the tracks. There's an original song by group member Peter Froelich that fits in perfectly well with the rest of the songs on the album.

In short, these kids have a lot to be proud of. Should you buy this album as part of your general a cappella CD collection? On my first listen, when I didn't know this was a high school group, I thought, hmm — this one's a 3. It's a strong 3, but an average album nonetheless in the vast spectrum of a cappella albums — it's not going to spend a lot of time in my CD player after this review, sad to say. I would, however, strongly recommend this album to any pre-college students out there who sing or are interested in a cappella, to hear what kids their own age are capable of. Actually, a lot of college groups could stand to give this CD a listen too, especially if they're looking at making a first album of their own. And if any of these singers show up as a freshman on your campus and want to try out for your a cappella group — take them!

No Strings Attached is pretty good collegiate group, except for the fact that all the members are in high school. Wait a minute. High School? Wow! When these singers get to college they will all be tremendous assets to whatever collegiate a cappella groups they join. Road to Nowhere is a real achievement and an obvious learning experience. If only every high school could offer opportunities like this.

Gabe Rutman's fine production and engineering touches lift this album more than a few notches over your average college fare. (It's no spiralmouth, though). The singing is energetic. Rhythms and tone colors are much more solid than pitch, but the album is still listenable, even if not quite a must-have.

For high school, this recording is just fantastic. For college it's maybe just a hair above average (better production, less experienced singers). To the singers I give kudos for a job well-done. To potential buyers ... it's a toss-up. If you've got the expendable cash, you might just want to pick this up as the first in a new wave of high quality high school a cappella group recordings. If you're a little short on cash, maybe it'd be better to appreciate this one from afar.

You have to be impressed when you hear a high school a cappella group performing on par with many collegiate and adult amateur groups. Believe me, I am.

I want to make an important distinction at this point — these are in fact kids, vs. young adults or aspiring professionals. I feel obliged to be positive and constructive in my criticism, to encourage a musical achievement which I believe is phenomenal. So, as you read on, keep in mind that I must compare this album, fairly, against the entire world of a cappella music.

You will find covers of nine mostly familiar, contemporary, tunes, plus one original(!). Four of the tunes are arranged, quite well, by members of the group(!!), and there is even a live track. Nearly every song has some form of VP, with two cameos by the album's producer and engineer, spiralmouth's Gabe Rutman. Congratulations to both Gabe and the group's director, Brock Harris, for doing an outstanding job of bringing the best out of these kids.

A number of tracks stick out as being particularly strong. Ace of Bass's The Sign is a great listen — even if you hate bubble-gum pop — they put a cool twist on it. Similarly, A-ha's Take On Me has good energy, some nice VP, and a funny editorial in the bridge, as the background's pop out with, "One hit wonder! One hit wonder!"

If you're an alto dying for a cool lead, then check out track 8, These Are The Days, originally done by 10,000 Maniacs. A strong solo performance, a cool arrangement, and VP by Gabe. Probably the album's most solid cut. Tom Petty's Free Fallin' is also very good — though with a female lead, I would have transposed the gender on the lyrics.

There are moments where the tuning slips, or the groove gets untracked. Occasionally the VP sounds a little rudimentary, and there are some blending issues. You'll find a number of mic pops. Some voices sound obviously stronger and more polished than others. And Gabe's VP kind of sticks out when compared to the rest of the album. But who cares, these are teenagers, for crying out loud!

Like me, you wish you could have done this in high school. I can't even begin to imagine what my life would have been like if I had been in a group like this back in the day. Very impressive.

High school a cappella is really coming around. Rating this album was pretty difficult. For a High school group, I would rank it up there with the best I've ever heard! For a group that has to live in the wide-world of a cappella recordings, this album is not quite as strong.

When I first got this CD I didn't realize the group was in High school. I listened to it and thought that it wasn't the greatest thing I've heard. Then I opened the booklet and noticed a mention of Burbank High school and then suddenly it clicked. My whole perspective changed. What a great CD!! I particularly like The Sign (track #4). It made me smile, and that's always good.

First of all, I've got a bunch of collegiate CD's sitting around here and most of them don't even have a fraction of the energy that No Strings Attached has put into this recording. I never felt bored or that the album was slowing down. The arrangements were solid and the production quality was very good (kudos to Mr. Rutman, nice job). Even an original thrown in there, just great! The percussion was very good for High school (Gabe's percussion was good too :-) ). I'd better watch my back, because some of these guys are on my tail!

They did have many of the High school problems of pitch/time that will be corrected with age and experience. These guys are great and I know next year's album will be even better, keep up the amazing work!!! I recommend this album to any High school groups who are looking how to do it right.