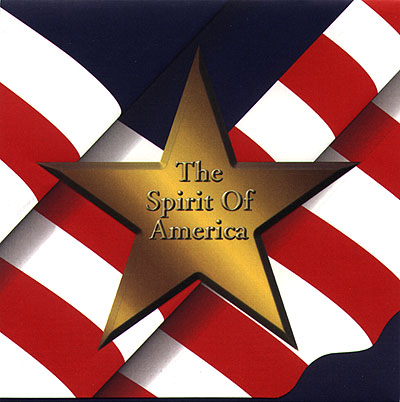 Spirit has developed a rather effective concept album with The Spirit of America. Not that its unabashedly patriotic, wide-eyed American theme is for everyone. But for the especially patriotic listener, Spirit has put together a satisfying collection. The album consists of patriotic songs and anthems — The Star Spangled Banner, America the Beautiful, America — and the most undeniable of American classics — Shenandoah, Yankee Doodle, Camptown Races, and others. Spoken-word elements are used quite effectively, from the opening Pledge of Allegiance that morphs from being spoken by a group of children to a group of adults, to the interview excerpts from veterans and their spouses that are interspersed between many of the tracks.

Song choices are also well thought out. On my first superficial listen to the album, I initially balked when I heard Dixie, but I then realized that it was balanced by the inclusion of The Battle Hymn of the Republic. The American Revolutionary folk song Yankee Doodle is updated with a unmistakably 20th Century arrangement. Throughout the album, the more patriotic anthems and hymns are balanced with other traditional tunes and folk songs. And while God Bless the USA is far from one of my favorite songs, I think its placement as the penultimate track is appropriate.

Musically, my favorite thing about this CD is that it's completely a cappella (unlike Spirit's other albums)! There's a great variety in song styles, and many of the tracks are brief, so the album flows well and is quite listenable. There are some tuning issues, especially when the sopranos are nearing their upper range (This is My Country and Give Me Your Tired, Your Poor, to name a couple). And my main complaint is that the production creates a muddy, almost echo-y sound throughout — it does help make a relatively small group (9 credited members) sound more choral, but it discourages precision and subtlety. I don't know if this effect is intentional, or if it's a result of this being one of Spirit's earlier recording efforts (Spirit of America dates from 1996) — in any case, it detracts from the album as a whole.

I was pleasantly surprised by this CD. Musically, it's not significantly better than Spirit's other outings, but the fact that it's entirely group-sung a cappella music gives it a more positive overall effect. I also see the album as more than the sum of its parts - the "Spirit of America" concept comes through clearly and creates a cohesive whole. Sure, it may be too hokey for a lot of people — heck, it's really too hokey for me. But it's sincere, without a trace of artifice, and its target audience — maybe not a general a cappella audience, but one with a dose of traditional patriotism — will definitely enjoy it.

Back in 1996, Spirit made an album called The Spirit of America. In it is a collection of traditional songs that are all unequivocally American. They have seeded many of the songs with introductions by real American war veterans talking about their experiences in combat. The whole album is a patriotic statement of the power and grandeur of what IS America.

It is also a pretty boring album. As a war veteran myself, I was not stirred by most of what I heard on this album — and I most definitely do not consider myself to be unpatriotic. Only the talking of the veterans and their spouses before a song made me interested in what was going on. This album is full of blood stirring hymns, and folk songs that most Americans can at least sing the first verses to. Songs such as The Star Spangled Banner, The Battle Hymn of the Republic, and Irving Berlin's God Bless America. These are songs that should get one's heart pumping, or at least produce a brief ventricular fibrillation. But they really don't do much of anything here on this album. Even with fun old songs such as Camptown Races, Shenandoah, or even Dixie you should have an urge to sing along. But I sat listening with a frown on my face. Not because what I heard was bad, but rather that what I heard was average.

I can remember when I first stepped onto American soil after fighting in Saudi Arabia and hearing the song God Bless The U.S.A. by Lee Greenwood playing in an Air Force hangar, and crying into the arms of a stranger. The song, and in particular the passion in Lee Greenwood's voice was what brought out the emotion. I can hear that song anywhere and I am brought back to that hangar. I have heard a passionate performance of that song by a choir that did the same thing. Hearing this version on this album just turned me off. There was no passion, there was nothing that grabbed me about Spirit's performance of this song — and of the rest of the songs on the album. They all just sounded the same to me. Arrangements that were bland, and performances that did not reach their potential.

That is how I would characterize this album: one that did not reach its potential. If you need a recording of songs such as these, I am sure you can find something better out there.

An album such as this could only hail from the heartland: a selection of folk, traditional and watered-down spirituals from America's musical history, done to death with over-frequent jazz harmonics and any sense of life entirely lacking. "Spirit" is related to "inspiration", anciently used to mean "with the energizing breath of the divine inside you": although on other albums this group has moved towards that ancient ideal, on this album they fall far short.

I have reviewed several of the group's albums, and normally rave about their blend. I find the voices on this album out of balance and occasionally out of tune; the sopranos are particularly susceptible to stand out and lean away from the tonal center (Shenandoah). Some substantial bass action looms every now and then, but is more than occluded by lackluster baritone and tenor voicings.

The arrangements are either themselves ponderous, or simply approached with too much gravity to leave the ground. The tracks are consistently quite slow, with too many repetitions of chorus and verse not made up for by what rings as overly elaborate harmonizing; on some tracks there is deviation from the melody before the melody has been established, strange for traditional and folk songs.

Finally, the presence of both children (chanting the Pledge of Allegiance) and "veterans and their spouses" (speaking between some tracks) seems heartfelt but only adds to the surprisingly unprofessional quality of this album.

Elsewhere, Spirit can really shine. This album is ponderously over par and without much redeeming value. Amazing spiritual and American folk song albums are out there; stick to Spirit's Christmas music.

There is no shortage of patriotism on this disc. If you're looking for solid performances of "Uncle Sam's Greatest Hits", then this album is for you. Throwing a Fourth of July party? Memorial Day? Here is your background music. Sprinkled in between the tunes are a number of sound bytes from interviews with "veterans and their spouses" — a nice touch, giving the recording a concept album feel.

Spirit is a small ensemble from a choral standpoint, that tries to sound big. Most of the time, through the use of studio tricks like chorus and flange effects and maybe even some multi-tracking, they are successful. Listen to their rendition of James Erb's beautiful arrangement of Shenandoah for a good example. It sounds as though they have three or four voices on a part, and this is just a nine member group. Then listen to Battle Hymn of the Republic, and you will hear some of the potential downside to trying to sound big. Too much flange, giving them a mechanical, obviously enhanced, sound.

Another technical note: listen closer to Battle Hymn of the Republic and you will catch the engineer cheating. There must have been a major mistake in the original take, because one of the phrases has obviously been "punched-in". The over-dubbed section was clearly recorded during a separate session, as the EQ and balance are noticeably different from the rest of the song. Maybe most folks wouldn't notice, or care. I found it a little annoying.

I applaud Spirit for choosing such good arrangements. There is a danger with the song list for this album, being full of so many well-known songs, of a sense of repetition or even boredom in the performances. Particularly when they roll through all of the verses of strophic folk tunes like Yankee Doodle Dandy and Camptown Races. But, in each case, the arrangements provide plenty of variety and innovation on each verse. And Spirit does a nice job with dynamic contrast as well.

The blend is consistently solid, and the tuning is almost always right on; just a few chords don't quite lock in here and there. There are no clunkers on this album, and a few performances that I consider first rate, including Shenandoah and Dixie.

As an American, I always expect albums like this to send shivers down my spine. This one didn't. While it starts off well with a great recording of The Star Spangled Banner, the rest just kind of blended together. Each song was done well, but it seemed like the same chord progressions and tempo for each one. If each song is taken individually, I would highly recommend them, but as an album there's a little more to be desired. Also, the insertion of stories and speaking parts makes it difficult to stick in the old CD player and hit random. The reason that I gave the Armed Forces Medley less of a rating is because it isn't really a medley. I expected each song to roll into the next. Instead, between each song there is a drill instructor that yells commands to his troops. A little distracting.

As a whole, this is a decent album. If you're looking for a certain song then there are some fine arrangements here. If you're looking for an album to sit back and marvel at, this one isn't it. I think with a little more innovation this could have been an excellent album, but when everything sounds the same, it's tough to not fall asleep while listening to it. I wish I could say more.