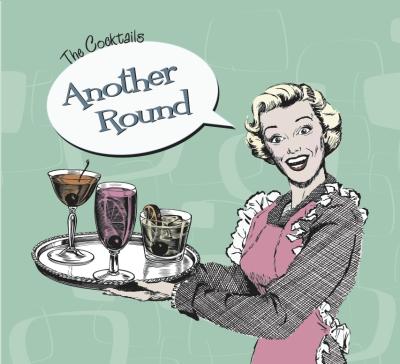 The first few moments of an album are arguably the most important; it can take a whole album to make up for a lackluster start. So for me, there's always a certain ritual to starting an album, putting in a CD, dropping the needle on a new vinyl. My ears are open, and I'm ready to listen.

Another Round starts off just right. A low drone in the background, the echoes of a muted trumpet ... and then the bass comes in. It's atmospheric, it's moody, and it sets the tone for the whole album. Russian Roulette, the opening number, runs with this energy and builds on it. Soloist Laura Simpson is fantastic, the beat is propulsive and the chords lock and shimmer in the brilliant way that female voices do.

The Cocktails are an all-female a cappella group from the University of South Carolina, and they are a group to watch. Another Round is a well-conceived, well-structured album that avoids the typical collegiate pitfalls: the group's blend is lovely, the album's tone is consistent, the soloists really bring it, and the arrangements are a step up from typical fare (reinventions of Sunday Morning and Numb work better than you'd expect).

Which brings me to the album's main failing. While I was mostly impressed with the mixes, the album has some auditory failings. There are some balance issues — some songs feature unbearably loud solos, overbearing bass, strange middle parts that stick out like sore thumbs. There are also severe clipping issues, particularly on Settle Down and Russian Roulette. The volume clipping causes distortion that is clearly audible, and is a major distraction. The clipping could have been caused by several things: improper recording technique, tracks boosted excessively in the mix, plug-ins gone awry; and it's likely that these factors contributed to the distortion in the final mix.

Aside from these glitches, though, Another Round is a delight. The Cocktails have produced an album that is fun, bouncy and modern.

[Editor's note: A previously published version of Nick's review mis-credited the arranging, tracking, editing, and mixing of this album entirely to the Cocktails. Three arrangements were contributed by non-group members, and the album was tracked, edited and mixed by The Vocal Company. RARB apologizes for the error.]

The Cocktails start strong but run out of steam quickly. The opening two tracks of Another Round are carried by seductively powerful leads from Laura Simpson and Nadia Shutkufski. But after these two conclude, the Cocktails' backs aren't interesting. Many of their arrangements try to sustain a single color and texture for an entire song. Verses and choruses sound pretty much the same. Songs don't go anywhere, and they end poorly. And while the parts work fine vertically, they are lacking horizontally: individual parts have weak lines. With great arrangements you can pick any part to follow and it will be interesting. That's simply not the case here.

But I'm not saying all the arrangements are uninteresting. Two tracks are taken dramatically slower than the original songs, and Numb is really well done. The slower interpretation highlights the song's strong lyrics, and Dominique Johnson does a great job handling the solo at a slower tempo. The song has also been restructured — three minutes in, the backs cut out and gradually build back up to a climax repeating the phrase, "I'm tired of being what you want me to be." It's powerful and clever.

But where Numb succeeds, Break Your Heart fails. I am confused by the decision to take this song so much slower than the original. It removes the original song's only real strength, its great dance beat, and the Cocktails don't add anything to compensate for this loss. I expected the track to eventually pick up the tempo and go into the original, but it never happened.

Another Round has some strong tracks and a lot of average ones. These are good singers, but good singing is no substitute for good arranging.

With their second album, Another Round, the Cocktails of South Carolina demonstrate admirable consistency across genres, largely with their ability to create just the right atmosphere for most of the songs on this album. Nadia Shutkufski's moody (and CARA-nominated) arrangement of Linkin Park's Numb ebbs and flows perfectly, while Alfredo Austin's arrangement of Maroon 5's Sunday Morning is warm and bubbly. In general, the arrangements are smart and make excellent use of space and pads in the background. Unfortunately, there's not a whole lot of compelling and gripping moments in the foreground, leaving the group sounding a bit as if it has had one drink too many and the night is getting late.

The Vocal Company's production on this album is clean but not sterile, generally striking the right tone in light of the arrangement to paint songs with atmospheric accuracy. There's pop and groove in the percussive elements of songs like Settle Down and Shark in the Water, which give the album a kick of otherwise absent intensity and energy.

The Cocktails call themselves "sassy" and "classy", and while there is certainly a polished and charming presence of the latter, there's a notable absence of the former in the singing on this album. In fact, this may be the single biggest thing I miss on Another Round — some edge and attitude. In Dog Days Are Over and Tightrope, for example, the group tackles songs that offer the potential for them to really let it rip. Instead, the group sings with delicacy and precision. I can't tell whether they can't or simply won't really go for it, but I can tell that it is the kind of thing which could have really elevated this collection of smart, competent songs to top shelf material. Solos are similarly safe; they often sound clean and in tune, but also timid or reserved. Exceptions include Shutkufski on Settle Down and Dominique Johnson on Dog Days Are Over, both of whom offer nice dynamic contrast and personality with a hint of edge.

Another Round is a nice album, with nice singing and nice arrangements. The Cocktails play it safe with a wine cooler though, and they ought to try some tequila or something else with a little more kick for their next album.

Another Round can be purchased through the group's website, on iTunes, or from any Cocktail!