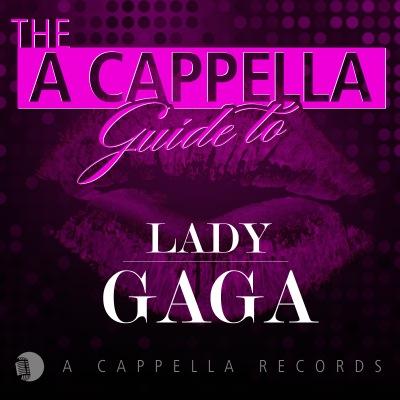 I always get a little excited when a compilation albums arrives because more often than not, they feature hidden gems — repertoire, arrangements, groups, soloists — previously unknown to me. At the same time, I always find them challenging to review because every track features a different group, a different listening experience, and a fresh set of comments. Other than praise or criticism for those who assembled the album, there often isn't really that much to say about the work as a whole.

The A Cappella Guide to Lady Gaga makes matters even a bit less interesting by defining the terms of the music to be included — that of the aforementioned Miss Gaga. The music here isn't even lesser-known Gaga; it's pretty much exactly what a listener would expect.

Now on the plus side, this album was put together by A Cappella Records, which knows more than its fair share about solid a cappella, so there isn't a dud to be found here — as well there shouldn't be on what is inherently trying to be a "Best Of" album of sorts.

Still, though, there is a fair amount of variation in quality, centered primarily in the area of arrangements and energy (and perhaps to a lesser extent, the impact of production on the listener's perception of energy).

Not surprisingly, the best arrangements here are contributed by Tom Anderson, and they open and close the album. But let's come back to Tom in a second.

Sandwiched in the middle is a slavishly faithful version of Just Dance from The Red States which sounds bright and authentic down to the distortion that's trying so hard to match the electronic feel of the original. It's mimicry is perhaps something to marvel at initially, but its monotony wears you down as it plods endlessly onward. And the mechanized sound opted for by the group does nothing to lend any emotion or meaningful attitude to the performance (apart from the soloist, whose voice is less "treated"). Contrast that with Bad Romance from On the Rocks which translates, rather than transcribes, the original into a faithful cover with undeniably human solutions to instrumental challenges.

Then there's Speechless from the UCSD Tritones which is lovely, I suppose, except that block chords just can't hold my interest for four minutes. And that's about as much as there is to this arrangement, even as well-performed as it is. Contrast that with Yoü and I from the University of South Carolina The Cocktails, an all-female group that takes a definitive point of view on what could easily have been another humdrum sound-alike version of an overplayed song. Sure, there is unison, some block chords, some simpler moments. But there is also variation, development, dynamics, build, and an overall emotional arc for the song that is facilitated by the construction of the arrangement.

Which brings us back to Mr. Anderson and more specifically, to his arrangement of The Edge of Glory, which in many ways is a master class in and of itself on Arranging 101. It has an intriguing opening, segueing into an unexpected and perhaps quirky treatment of the first verse, resolving into a more straight-ahead treatment of the first chorus, culminating in an inventive and unexpected transition into the second verse. The second verse gives us an entirely new treatment vs. the first time through, and then builds on itself with extra ornamentation added in the B section. Another chorus, with the soloist building in emotion, and then we're taken to an entirely different place — musically, sonically, technologically — for the bridge. Then WHAM!, we're back into our comfort zone with a repeat of the now-familiar chorus as the soloist wails away. Whew. I don't smoke but I need a cigarette.

What's the takeaway? If you're a big Lady Gaga fan and you're a big a cappella fan, this is as good a compilation as you could likely hope for. If you're not and want to be a bit more discerning, maybe picking and choosing the "right tracks, baby" is the way to go.

A Cappella Records is forging new territory as an enterprise by producing various compilation albums. Its first endeavor is The A Cappella Guide to Lady Gaga. I'm a big fan of compilation albums. (I sort of have to be given my current responsibilities and projects in the a cappella world!) For me, the opportunity to create new art from previously established endeavors is one that is hard to pass up. The end result can be invigorating and exhilarating.

It's also hard as hell to get right. The last compilation I reviewed was in 2002, Gabe Rutman's GASP. In my review a decade ago, I remarked:

"Rutman has created a remarkably cohesive compilation of groups and styles, ostensibly to promote the artistry of the performers, but it does an excellent job of showcasing his handiwork as well. This diversity actually helps the creativity of the recording."

And that's the rub: how to make disparate tracks sound like one cohesive unit. You could start with a single artist, which would give a common thread from an artistic standpoint. Considering the popularity of Lady Gaga in the collegiate realm, it should be fairly easy to find enough excellent tracks worth putting onto a compilation album.

History does repeat itself. In my GASP review, I commented: "The only true misstep on the album is the inclusion of Billy Jean (sic) by The Claremont Shades. While I'm sure it was a great track for the group's recording, it is simply outclassed on this album of superb tracks."

A similar occurrence happens on almost half of the tracks presented here. Speechless by The Tritones, Yoü and I by The Cocktails and The Edge of Glory by Standford Mixed Company don't have the same punch and pizazz of the other tracks. For two of the songs, the arrangements are the culprit. Speechless and Yoü and I plod along, never really blossoming into fully-realized or engaging songs. In fact, the percussion and bass downbeats in both songs are so heavy-handed that they thud into the brain instead of thumping like a Top 40 pop song. And the balance on Yoü and I verges on the ridiculous. Instead of uniform swells and effective dynamic changes, the various vocal lines scream their parts intermittently throughout. Very odd. The Edge of Glory doesn't have any edge and fails to live up to the interesting opening — it's good, but it just falls flat once the chorus kicks in; it suffers being the closing track of the album. The Spartones' Gaga Medley would have been the obvious choice to close, or the still incredible Just Dance by the group formerly known as The Red States (now called Restated).

The middling tracks are frustrating because they come so close to being amazing. Even though I gave it a '4', the problem that I have with the Gaga Medley is not the arrangement. As far as medleys go, this one is nearly seamless—surprisingly creative—but I'm completely distracted by the two soloists. The vocal timbres don't mix, so that when one song should blend into the next, it doesn't actually. Bad Romance makes perfect sense being added to the compilation considering the effect it had on a cappella in 2011. I didn't like it all that much when I initially reviewed it, and it doesn't hold up any more with the additional scrutiny.

On the flip side is the aforementioned Just Dance. It still sparkles and is a complete joy to listen to. One of Peter Hollens' earliest attempts is the still heartwrenching (for me) Born This Way. It's been a while since I've heard a near perfect track and more than a year later my assessment is still the same.

Because we live in an iTunes® world, you probably don't need to purchase the entire album and you probably already own the two standouts. If you aren't a fan of The Spartones, I do suggest trying them out for some very clever arranging and enthusiastic soloists. I can't wait to see which artist A Cappella Records tackles next. I'm as excited as I used to be waiting for the next artist that was going to be celebrated on MTV's Icon.

Oh, Gaga. How we love you and your disgustingly catchy tunes. The A Cappella Guide to Lady Gaga features Mother Monster's songs from every angle: all-male, all-female, mixed, collegiate, professional, and multi-tracked solo voice. The quality of music-making is just as wide ranged.

The compilation opens with a well-sung, fun interpretation of Born This Way from solo artist Peter Hollens. He hits every note with ease and soul. Tom Anderson's arrangement is intricate and sophisticated, but also cheeky. It's definitely an invitation to keep listening.

Hailing from Gaga's own hometown of NYC, The Red States keep the energy up with a near verbatim cover of Just Dance. It's well-sung and pleasant to listen to, but it doesn't offer the same innovation as the first track. Much of the same could be said for On the Rocks' version of Bad Romance, though their arrangement is a bit more exciting. The album's closing song, The Edge of Glory by Stanford's Mixed Company, falls into this "good standard fare" category.

The real standout on The A Cappella Guide to Lady Gaga is The Spartones' Gaga Medley. It's everything an a cappella recording should be: extremely fun, well-sung, musically interesting, and it makes you want to keep coming back for more. Not to mention, it could serve as a guide to Lady Gaga all by itself with all of the songs the group creatively incorporates into one arrangement.

The Tritones' version of Speechless falls victim to a curious soloist choice. The singer's bright and bubbly tone might well be appropriate for the Great White Way, but it doesn't capture the drama of Gaga the way a more robust voice would. In contrast, the soloist on the Cocktails' version of Yoü and I is well-equipped for the song. Unfortunately, that's about where the positives end for this unfinished, anticlimactic interpretation of Gaga's latest hit. Heavy syllables and an arrangement with no real direction have made me scratch my head on this one.

Altogether, The A Cappella Guide to Lady Gaga is a fine collection of covers. It accomplishes exactly what the title sets forth: it's a nice guide to straightforward a cappella interpretations of Gaga's famous songs. Still, one wishes for more songs like the Spartones' Gaga Medley. While the other tracks are fun as part of the whole compilation, Gaga Medley and perhaps Born This Way are really the only tracks worth setting on repeat.