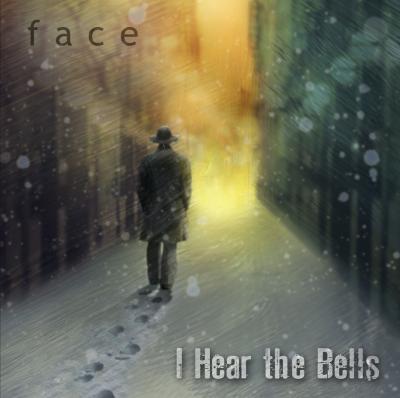 In a world of forgettable, unoriginal collegiate recordings, a world where fifteen voices compulsively overdub until a torrent of competing syllables drowns listeners in cacaphony, this professional sextet stands apart. Face delivers two catchy, original compositions, and brazenly unexpected pairings like O Come, O Come Emmanuel/On the Turning Away. Emotional rock leads, delicate and driving percussion, and a subwoofer-abusing bass don't hurt either. I Hear the Bells is a winning and original addition to the holiday music club.

Admittedly, the "joh joh" syllables give I Hear the Bells an inauspiciously collegiate opening, but thankfully, that choice is quickly abandoned as Face reveals its authentic professional style and the alt-rock original unfolds. On Face's second original, If I Think, Ben Lunstad pens an emotional appeal to change our ways that vaguely recalls the mood of Duran Duran's Ordinary World.

Whether the track is original or cover, Face earnestly belts out rich, homophonic rock. And the group does so with dynamics, creativity, and genuine heart. Denver-based, the group consistently reflects a true, American heartland sound.

Even Face's live cover of the (perhaps overdone) You're a Mean One, Mr. Grinch delivers both first rate musicality and some delightful surprises. Famed sports voice-over artist Alan Roach wows the audience with his gritty and familiar basso profundo. After having his voice featured in two Olympic Winter Games, four Super Bowls, and all the Colorado sports you can imagine, Roach's comical performance on the song and his audition on the final track drive the audience wild.

While Grinch Auditions is likely a one-time listen, it's a fun one. And for heartland rockers, nearly everything else on I Hear the Bells should get quite a few more spins this holiday season.

In the growing pantheon of a cappella Christmas albums, Face's I Hear the Bells stands squarely in the middle, and perhaps a bit off to the side. An odd mix of classic Christmas songs and thematically appropriate secular selections, this isn't your typical holiday fare.

I Hear the Bells begins with an original, its title track, that doesn't mention The Holidays at all aside from a passing reference to "the season". Riffing on the musical themes and triple meter of Carol of the Bells, composer/lead vocalist Stephen Ross gives us an achingly bittersweet, quasi-rock paean to lost love reclaimed just in time for the holidays. Ross's baritone lead is achingly beautiful and dripping with angst — think a less raspy Scott Stapp — but the group sound here is just too thin and energy-deficient to match the bittersweet pathos this song seems to demand. If I Think, written by the group's other baritone Ben Lunstad, is perhaps more successful if no less eclectic. The tribal "A ma ee boo oh ee ah" theme and locked "aah" chords resonate with a conviction absent from I Hear the Bells, a perfect pairing with the relentlessly optimistic "heal the world" spirit of the lyrics.

Then there are the mash-ups. God Rest Ye Merry Gentlemen/We Three Kings, the most straightforward and cleanest pairing of the three, is notable for featuring bass Forest Kelly on a fun, bouncy lead that nicely shows off his impressive range. O Come, O Come Emmanuel/On the Turning Away is a strange if compelling companion piece to If I Think; the Pink Floyd power ballad references similar themes of poverty and injustice, but having it bookended by the heavily choral O Come, O Come Emmanuel doesn't quite work except to tie the song very explicitly into the holiday theme. Silent Night/The River Runs Slow is even more jarring; the latter song, a tune by Sonia Dada that I didn't know until hearing it here, really seems to want to rock, but the former is essentially a lullaby that sucks out all the energy.

The rest of the album, with one notable exception that I'll get to in a moment, is surprisingly and disappointingly mundane. Little Drummer Boy has a lovely bow on it in the form of a cool arranging twist near the end — the line "Then he smiled at me" is repeated twice, tenderly and triumphantly, with slightly different voicings and some unexpected chord and rhythm substitution — but otherwise it's the same old "rum pum pum pum" we know and love. O Holy Night and Do You Hear What I Hear? are similarly straightforward.

As for that exception: the live version of You're a Mean One, Mr. Grinch is a pleasant surprise — that last little gift under the tree that you almost missed, which turns out to be something awesome. Rather than feature their own capable bass, as so many other groups have done before, the gentlemen of Face put baritone Lunstad on lead vocal and bring former Voice of the Rockies Alan Roach on stage to read the spoken dialog. (Although the bonus track Grinch Auditions would have us believe that Roach auditioned for the part on the spot, he never had any real competition.)

So should you put I Hear the Bells into anyone's stockings this year? The album as a whole feels a bit disjointed and unrefined, and the Grinch notwithstanding no tracks in particular stand out — but for a bunch of guys with day jobs, it's a solid effort worthy of some holiday cheers.

In recent years, the a cappella community has been inundated with holiday/Christmas albums from some of the best groups in the world, resulting in an album for every personal taste. Cadence, Take 6, Sonos, The Swingle Singers, Rajaton, and many others have released albums in the past few years. Some groups have put out multiple Christmas albums (Rockapella, Straight No Chaser). It's pretty clear that this small niche of the contemporary a cappella album marketplace is saturated, and there's an awful lot of competition for my (and your) hard-earned dollars.

Given the extremely high quality of the available choices, the questions which I invariably ask myself when a new holiday album is released are: 1) does this group put its own stamp on the music such that I can pick out its version of Silent Night from the other four on my iPod?, and 2) is there even a chance that I would listen to any of this music any time other than the six weeks between Thanksgiving and New Year's Day?

For the most part, the answers to both questions for Face's I Hear the Bells are yes.

From the opening chimes of the title track, an original no less (!), a few things are clear. Face is a vocal rock band with chops. The group has a rich and solid bass, punchy, crisp percussion, and some terrific soloists. I Hear the Bells and the other original song, If I Think are both catchy songs with groove. The group also offers unique takes on some holiday staples. The men meld O Come, O Come Emmanuel with their stellar cover of Pink Floyd's On the Turning Away (a tune which garnered unanimous 5's from RARB reviewers on Face's album Momentum). Silent Night flows smoothly into a slowly building cover of Sonia Dada's The River Runs Slow which climaxes with a gospel-ish section that doesn't quite land as much as I hoped, but is nevertheless powerful.

When I first looked at the tracklist and saw yet another live version of You're a Mean One, Mr. Grinch I groaned, but the group's banter live in concert with guest Grinch Alan Roach is fun, even if the faux horns are a bit irritating.

I have to briefly mention bass Forest Kelly. He manages to pull off a resonant and surprisingly instrumental bass sound throughout the album, while still being able to take a baritone-range solo on We Three Kings straight down into the basement.

Production on this album is fairly clear and transparent, and with the exception of a brief guitar solo on On the Turning Away, everything sounds vocal and not overprocessed. This was a smart decision for a holiday album, which includes a majority of music derived from choral and carolling roots, and which will likely be appealing to folks who are not necessarily acaphiles searching for the latest bombastic beats.

I Hear the Bells is not a traditional Christmas album, but it is the rocking-est one I've heard. There are a few tracks I might even put on a regular a cappella playlist. I'd love to hear Face build on its promising songwriting skills with an album of all originals, but for now I recommend I Hear the Bells to those who enjoy vocal bands, good singing, and holiday music.

Orders can be placed through the group's website, CD Baby, or iTunes.