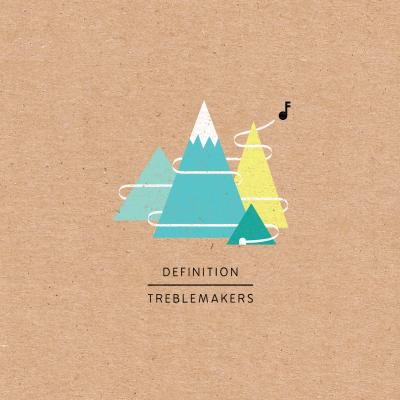 The Northwestern University Treblemakers have produced an impressive debut album in Definition. A mix of Western hits and jazzy takes on Chinese ballads, the sheer musical variety on Definition makes you want to take another listen.

Most of the arrangements offer tight harmonies on neutral syllables like "ahh" and "ooh". The pads gain depth as each tune progresses, offering a slight build that is necessary to maintain interest in these simple arrangements. As a result, the backs are pretty solid across the board. The singers are nicely in tune and the blend is warm and yummy. It's wonderful to listen to but does call for a bit more complexity. The Treblemakers are clearly talented — on their next release, I'd like to see them reach a little higher.

Despite their relative simplicity, each arrangement offers something different in terms of style. There's no lack of variety on Definition, and it makes for a fantastic listen. The jazzy harmonies of Oh Yeah!!! are inviting and upbeat. The song will get stuck in your head. Thank You settles into a really fun groove. Each mash-up works not only harmonically but also in its context. Other tracks — like the Chinese ballads — are gentle and heart-wrenching, even for those who can't understand the words. This alone makes Definition a win in terms of repeat listenability. You'll want to listen again, just to make sure you didn't miss something the first time.

There are certainly aspects that could use some fine-tuning to prevent a sophomore slump. The vp is underdeveloped and could use a lot more beef, especially in post-production. As is often the case with collegiate groups, the soloists need a healthy dose of confidence and chutzpah. But small complaints aside, the Treblemakers have offered up something special with Definition. I can't wait to see what they do next.

Definition is the debut album for the Northwestern University Treblemakers, and while there are numerous problems throughout, they're not the missteps you might expect from a first album. For the Treblemakers, the problem rests not with a lack or creativity or amateurish production, but with poor soloist choices. And unfortunately, the soloist issues make the album tough to listen to throughout.

It's not all bad with Definition. The co-ed singers of Northwestern University's premier East Asian-interest a cappella group sing with energy. Arrangements include several mash-ups of East Asian songs and Top 40 radio hits, but not so many that it feels like a gimmick. There are a couple of very creative arrangements, including the original tune Our Story which closes out the album.

But the soloists. The soloists are poorly chosen throughout, running the gambit from timidly quiet to reaching for notes that are clearly not in the singers' ranges. The production does its best to mask these flaws, but not much can hide a voice straining for notes it can't reach. It's a bit baffling, because the background vocals don't sound half bad. Nothing to blow your socks off but nothing offensive either.

This makes me think that the Treblemakers fell into the rookie mistake of choosing songs they wanted to sing, regardless of whether they had a soloist who could carry the tune. In the future, I'd advise group members to think of songs they like (cause who doesn't want to sing fun, current, well-known songs?), and then have solo auditions before they commit to arranging it. There's also no rule that in order to perform an a cappella cover of a song, a group needs to do it in the original key it was written in. Tailor your song choices to the singers you have available, not the other way around.

Because when the soloists are off, it's difficult to appreciate anything else. The soloists are front-and-center of the songs, and as a listener it's tough to move past a soloist who is unsuitable. For their next album, I hope the Treblemakers think carefully about what songs their singers can carry. If they choose wisely, I think their next album will be a marked improvement.

In their cover of Christina Perri's Jar of Hearts, the Northwestern University Treblemakers repeatedly ask: "Who do you think you are?" The group seems generally unable to answer this question in its debut album, Definition. As one of the few collegiate groups to blend American pop with Asian pop and standards, the opportunity for a cappella identity is there. Unfortunately, the finished product isn't — at least not yet.

The group's website claims the Treblemakers are "always looking for something fresh to perform" and their unique style will be fresh for many listeners. The marriage between American and Asian pop seems more natural than some other intercontinental music fusion. The overall result is nevertheless somewhat stale.

Most notably, this album feels a bit sterile and saggy. The vocal percussion is clean and punchy, particularly in songs like Insomnia, but generally lacks any pop or sizzle. The same is true of solos, which rarely offer anything which demonstrates or inspires any gritty emotion. The notable exception is Qing Chang's warm, breathy solo verses on Red Bean and her smooth delivery and soulful tenderness in the duet. Excluding George Liu's vulnerable and nostalgic offering in Our Story, most of the remaining solos lack proper breath support and tend to sound a little lifeless.

The Treblemakers undermine anthemic party songs like Yeah 3x/Dynamite by singing with tight control and no sense of urgency. This mashup, Jar of Hearts, and Insomnia — the three songs based purely on American pop tunes — are the most lethargic tracks on the album. The transparent production on Definition, which is devoid of any technical wizardry, actually suits the group's mellow and earthy style, but ultimately yields few compelling moments.

The liner notes of this album are both stellar and misguided. For each song, the group offers credits for solo, arrangement, percussion, and the artist whose performance they are covering, as well as (importantly) the original composer(s). For those songs not in English, the group indicates the language and offers translations for many of these songs on their website. This was a necessary and thoughtful touch. The group also offers explanations for each song in an effort to stay true to the Definition theme. The Treblemakers would be better served by letting their music speak for itself, particularly where summaries describe emotions or stories which simply aren't reflected in the group's performance.

This debut album offers a unique contribution to the collegiate a cappella library with its mash-ups of contemporary pop from vastly different worlds. I love that the Treblemakers sound honest and true, if not quite enthusiastic enough to make many of the songs really stand out. They also shine in moments where they offer surprisingly pleasant (and colorful) chord substitutions. Unlike many new groups, the Treblemakers have a sense of what they hope to say. The next step is for them to decide how to build on this kernel of identity and flesh out the details which are mostly absent here.

Physical copies of Definition are on sale via PayPal at www.nutreble.com.