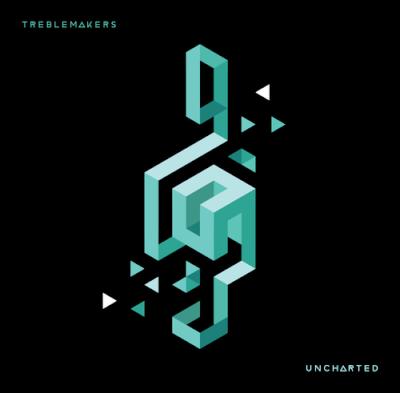 When you are in the business of listening to lots of a cappella music, you develop something of a hardened shell. So many groups, at all experience levels, offer generic, bland reproductions of popular songs that it eventually requires something with energy, personality, and individuality to pierce that shell. Uncharted, by Northwestern's Treblemakers, is not that type of album. I say this not to be cruel or unnecessarily harsh, but to hopefully inspire them and groups like them to aim higher, brighter, sharper.

Uncharted is a fairly typical collegiate album in that it is neither great nor terrible, it just is. There's some decent blend at times, but also some struggles. A few of the female soloists do a nice job, but because the group fails to offer any credits whatsoever in the liner notes I can't praise them by name. The liners were a surprise to me because, as I mentioned in my review of the group's last album Definition, the group previously offered a robust listing of credits which included arrangements, soloists, vocal percussion, and even the original artists and performing artists. While I thought the group offered a little too much with explanations for what they were doing in each song, I surely did not intend or expect for the group to follow it with precisely zero information about individual tracks here. I hope Treblemakers can find a better middle ground with the next release and provide all of the information that deserves to be credited for each track.

Setting aside the broad comments of a hardened and cynical reviewer, I should be clear that very little on Uncharted sounds bad. The group does long, sustained phrases well and A Love That Will Last exhibits this well underneath the earthy, engaging solo from an unidentified female soloist. Nothing Better also fits this mold, though it doesn't have the fun trumpet licks of A Love That Will Last.

The problem is that very little on Uncharted sounds great. Breakfast Song is somehow cheerful but lethargic, a pervasive problem throughout the album. I described the group's last album as "sterile" and "saggy", and while I might upgrade Uncharted to "muted" and "stuffy", this is hardly a breakthrough development. Even when the group gets louder, the singers lack electricity. The oft-covered Battlefield is far from the worst arrangement of the song I've heard, and there some elements in it designed to propel, and yet ... it just doesn't ignite. The same is true for Lights, though I did enjoy the various mouth noises added for texture. Unfortunately, for the most part there's a lot of white noise here. While I do not doubt the group's fans and friends will find it a pleasant enough album, it's hard to see anyone else getting particularly excited about Uncharted. At the risk of finishing a review with a trope involving the group's name or album title, Treblemakers doesn't seem so much uncharted as adrift. If these singers are content to float along with the sound and approach offered here, that's perfectly fine. But if they want to make something meaningful to the a cappella or broader music community, it's time to set a new course.

In its latest release, Northwestern University's Treblemakers presents five different languages to create a unique blend: English, Tagalong, Mandarin Chinese, Korean, and Japanese. Uncharted is unique in how eclectic its track list is, but unfortunately very few of the songs included stand out.

With only a few exceptions, the arranging choices are some of the album's biggest hindrances. A predominance of homophonic triads or block chords on simple syllables with little dynamic contrast is the overwhelming feel to the entire album. At times this can be effective, but only when contrasted with varying textures and chord choices. The songs that did employ more sophisticated chords and the occasional color tone for dissonance, such as Nothing Better, stand out but should be more of the norm.

While I was not terribly familiar with the original songs in other languages, the album begins with Kaleidoscope Heart/Uncharted, which reads to me like a warning label. Something like "WARNING: TRANSCRIPTIONS AHEAD". When covering a song that is already very vocal, producing an exact copy will draw an immediate comparison to the original that it is nearly impossible to shake, and rarely will the copy be preferred. One of the most exciting parts of producing covers is the opportunity to do more than the original, or at least something different. This is particularly true of the Sara Bareilles tunes, which set a flat introduction to an album that has more to offer. The solo work on this album could also be stronger, as there seems to be an absence of bold, intentional, or unique choices.

That being said, there are tracks executed particularly well. Nothing Better grabs your attention from the first chord and continues to deliver with major-major seventh chords, effective background vocals, varying textures, and a passionate solo from Jane Kim. Lights opens with jazzy chords and solid syllable choices, providing one of the album's strongest covers. And with its brightness and general flow, Breakfast Song is, quite simply, a good time.

The group could have provided more information with this album, including information about each track and translations. Such an ambitious project involving multiple languages should have a chance at being understood, and the concept can be made clearer to a listener with more transparency. Regardless, there are some individual tracks to enjoy on this album, and I recommend that you check them out.

Uncharted is an interesting name for the newest release from Treblemakers, the Eastern Asian fusion group from Northwestern University. Fusion is becoming a growing trend in the a cappella community. However, more of the popular fusion is Southern Asian fusion, where groups like Penn Masala are driving the charge with Hindi-infused music. Treblemakers is a different breed. Their music is infused with Mandarin Chinese, Japanese, Korean, and Tagalog (a language from the Philippines). The use of these Eastern Asian languages in North American a cappella is still mostly uncharted territory. Therefore, Treblemakers gets the blessing and the curse of not having a safety net. Both the good and bad moments are credited to the group. Unfortunately for Treblemakers, while this difference makes the album an interesting case study, the mediocre presentation is not enough to make this the pioneering album I was hoping for.

One of the most amazing things about this album is just how well it flows. This album features five different languages. However, the style of the album permeates throughout. Group member Joanna Wu arranged or co-arranged nine of the twelve tracks. As a result, a lot of the same distinguishing features, such as common chords and vowels used, could be considered her style. Lights is a very cool example of this. This song became one of those songs that almost everyone and their uncle performed when it first came out, and the vast majority stuck to an almost direct transcription of the original. Treblemakers didn't. The opening minute and four seconds isn't a transcription, but rather has the same signature sounds as much of the rest of the album. While I could anticipate hearing these signature sounds for many of the songs originating from Eastern Asia, it is very interesting to hear those sounds included on Western songs. If there is any track on the entire album that best represents Treblemakers, it is this one. However, even the tracks not arranged by Wu still have many of those same stylistic features. This speaks a great deal for the group, as it means that the singers were responsible for creating their sound. Regardless of a song's country of origin, style, or arranger, I find it important that a group has a sound that it can call its own while performing. Having a sound that permeates through an entire album is good. Having a sound that permeates through multiple different styles and languages is just darn impressive.

However, I'm not huge on the sound that the group created. There's a major risk to doing songs in a language the audience doesn't understand. Words quickly become irrelevant. This brings to mind the famous Hans Christian Andersen adage "Where words fail, music speaks", which can be a dangerous dual-edged sword. I listen to most albums about eight-ten times, which lets me entirely digest what is presented. I read the lyrics only twice while listening. This introduced one major problem: while Treblemakers has a unified sound, the meaning behind the songs don't necessarily transfer well to the performance. In numbers like 거위의 꿈 (Goose's Dream) and 忽然之间 (Suddenly), the emotion just doesn't flow out very well. The tracks become a little stagnant. The volume is often a bit monochromatic, and the vowels and syllables sometimes become dangerously repetitive. I have to force myself to focus closely to the songs. Otherwise, they simply become background noise. Even though the lyrics are inspiring and heartfelt, the overall emotion doesn't fully transfer to the audience. If the point of music is to share what words alone cannot, I feel like the language should be irrelevant. This is the driving force behind why fusion a cappella is so enticing, and Treblemakers came up short.

While Uncharted isn't the new pioneering Eastern Asian fusion album I hoped it would be, it still is an interesting case study. I'd like to think of this album as a tour across the countryside. Overall, the ride is a pleasant one. There are no surprises. The journey is straight and simple. There is beauty in the tranquility and the occasional pleasant moment, but the drive eventually becomes boring. When you reach the destination (the end of the album), you feel content with the journey, but maybe not pumped to embark on it again immediately. I want to be exhilarated when I take the next tour. Treblemakers has the potential to make the musical journey memorable. However, for now, their potential within the Eastern Asian fusion category still remains uncharted.

To order a copy of the album, please visit the group's website or send an email to treblemakers@u.northwestern.edu.