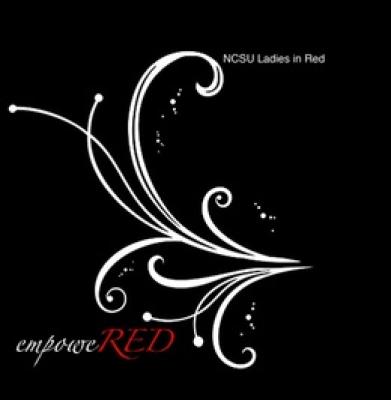 The NCSU Ladies in Red know who they are: indie rockers with a distinctly feminine touch. With repertoire spanning more than half a century and ostensibly across multiple genres, it would have been an easy mistake for the Ladies to record a karaoke variety special: a little of this, a little of that. But random tracks don't make for good albums and the Ladies show they know that. Instead, they wisely use a combination of attentive arranging, thoughtful song choice, and earnest delivery to craft to an impressively unified sound.

The empoweRED arrangements are refreshingly simple with a touching folk sensibility. On track after track, pure, sustained vowels, and a respect for space expose beautiful voices that fully embrace both their femininity and strength.

Toxic and Paparazzi sidestep the shallow temptation of sing-a-long delivery, and instead touch on the underlying darkness in their respective lyrics. And they do this without losing energy or intensity. Listen to the Music flows easily, letting simple beautiful voices ring out. My Heart With You could easily have been written some sixty years ago and Chelsea Schwabe's arrangement presents listeners with an emotionally rich, stripped down version that captivates. Jessica Schwartz's arrangment of Led Zeppelin's Battle of Evermore becomes a harmonized indie rock hit and a perfect fit with the Ladies In Red sound. Pretty Girl Rock and Easy Silence don't quite live in the empoweRED world; the former a swaggerless cover of a flash in the pan original, the latter a country favorite, yet somehow with a more a maudlin, musical theatre sensibility.

But liner notes aside, in thirty years, when so many a cappella albums will sound as phony as a boy band soundtrack, empoweRED will still have heart. And that makes this release something special in the world of collegiate a cappella.

Except for covers of a few very contemporary songs (like by Keri Hilson and Lady Gaga), one wouldn't immediately know that empoweRED is a recent release by NCSU's Ladies in Red. That's not entirely the fault of the song selection, though: the recording here just sounds dated.

As a listener, I'm not looking for flashy bells and whistles; I just wish that something about the album sounded a little more modern. The recording is exceptionally bright — album opener Listen to the Music is almost gratingly crisp, with overly-enunciated "doo" syllables making the song sound like a performance for a music class instead of for a contemporary a cappella group. That choral sound gets in the way elsewhere on the album as well; all the gutsiness of the solos on Battle of Evermore is washed out by the sweetness of the backing voices (and don't tell me that women can't sing Led Zeppelin; Heart is notorious for tackling the Zep, and the solos here certainly reminded me of Ann Wilson's vocal power).

That choral sound can work in the group's favor on the right song. My Heart With You could be a lovely ensemble piece, but the reverb-heavy recording is exceedingly difficult to listen to — I feel like I'm listening underwater (seriously, I would've expected something better from the Vocal Company and Liquid 5th, who recorded and edited/mastered/mixed the album, respectively).

Elsewhere, the group falters with poor song choice (Pretty Girl Rock just doesn't fit with anything that this group does) and lack of dynamics (Mad World never really goes anywhere). Percussion sounds dated throughout, and many songs on the album are a constant reminder that this is an all-female group. Now, obviously, the Ladies in Red aren't hiding that fact, but these ladies can never seem to capture a full, warm sound without seeming too treble-heavy.

Even an average album has the potential for greatness, and the Ladies in Red blew me away with their rendition of Uninvited. It's an unlikely success: the original song is simple, slow, and sparse — and therefore doesn't obviously lend itself to an a cappella arrangement. The Ladies do a fairly straightforward version here, but they take risks: one wouldn't expect long, extended chords of "eeeee!" syllables to sound this good, but that harsh sound ratchets up the intensity and drama of the second half of this song. Chelsea Schwabe does double duty here with this dramatic arrangement and a haunting solo (she handles Alanis's awkward syllables-at-the-end-of-lines beautifully), making this song the standout track on empoweRED.

Finally, I wish that the Ladies in Red had spent a little more time with their song credits; while they perform Gary Jules's version of Mad World, they never acknowledge that the song was originally written and performed by Tears for Fears.

In the early years of contemporary collegiate female a cappella groups, there was a fair amount of predictability and repetition in repertoire. Covers of Sweet Dreams, Walking on Broken Glass, and the original Love is a Battlefield were a dime a dozen, making it difficult for groups to really stand out with their own versions or vision. In recent years, female groups have increasingly searched for ways to expand their range, both of repertoire and of voice. With empoweRED, the NCSU Ladies in Red make a conscious effort to break out and show that they are free from some of the old standards and refrains, and they do so with mixed success.

Sometimes, the Ladies make an inspired song selection, as with their cover of Led Zeppelin's Battle of Evermore. This tune lends itself so perfectly to their natural vocal range that I can't believe I've never heard a female group do it before. The arrangement lets the Ladies' voices hover and float, emphasizing perfectly the mandolin and the tangled vocal harmonies. The group follows this with a different kind of change, the heavily processed and drums-and-bass-heavy Paparazzi. This tune, more conventional as a song choice (Lady Gaga's repertoire has been picked dry), is more effective with the punch and sizzle from Carl Taylor's (Liquid 5th Productions) shiny mixing. Two other conventional song choices, Toxic and Uninvited, stand out from the myriad of other versions bouncing around the collegiate catalog. The first starts out beautifully atmospheric and ominous before speeding up, and the latter offers thrilling tension when the strings kick in halfway through.

Other efforts on the album are less successful. Mad World and Easy Silence trudge forward with little energy or innovation, and Listen to the Music is stilted with its sterile and clipped "ba doom doo" guitar riffs.

Though it is not uncommon for college groups to cut corners in production by releasing their album in a cardboard sleeve with no insert, the Ladies in Red are a bit too cavalier with their product here. The jacket lists only an artist in parentheses next to each title (presumably the artist who performed the version they are covering) rather than the original composer(s). Also, the group lists multiple recording studios without specifying which tracks were recorded by whom.

The NCSU Ladies in Red seem to be trying to prove that they are free of traditional constraints on empoweRED. They cover songs from each of the past five decades, and they cover songs from folk and classic rock to indie to current pop. They do so with a variety of vocal and production styles — sometimes with a thumping bass, drums, and effects, other times relatively au naturale. Some of their efforts pay off richly (I couldn't fail to mention the delicate My Heart With You), while others simply trickle away from the listener's interest with a whimper. I commend the Ladies in Red for putting a lot of thought into their choices, regardless of the specific results, and I hope they do so to greater consistency and effect with their next album.

To order a copy of empoweRED, fill out the order form here. Orders include a free copy of the group's previous release, Common Thread.