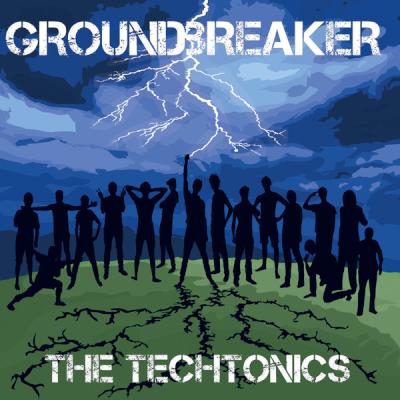 Utterly charming album from the Techtonics: a tight set of good singing, fun songs, and a love of the beat. A cappella needs its footstompers, and this group from London comes through, drowning out the blur of emo ballads with straight-up dance music.

Groundbreaker gets a lot of things right. The Techtonics stuck to the songs, seemingly saving the comedy shtick for the live show. They kept the set list short and well-suited to their talents and English charm. And they hired a slate of the best producers they could find to kit out their disc with as many bells and whistles as it took to make it easy on the ears. Dave Sperandio, James Cannon, Danny Ozment, Bill Hare, and Alexander Koutzoukis all contributed talents, experience, and a healthy dose of dubstep SKREEEEEE KXXX WOMP WOMP WOMP etc.

Earthquake does sound like it got hit with a Skrillex, but it's still fun. And it's still the guys. The song isn't all the same — it alternates between a choir boy and a pop/soul vibe and the sound effects (we're well past studio magic here) follow their lead. I liked that there was singing, I liked that there was change. Parts of this record reminded me of Code Red with a bit of the polish replaced with a bit more heart. Dreadlock Holiday grew on me after several listens, with its cool groove and layers of whistling and cricket (in this case, the insect and the sport). And the body percussion on Who Knows Who Cares is a great touch, elevating that track from a pleasant midtempo number to a song that can get under your skin. The song starts out with relatively un-retouched block chords, well sung and sincerely delivered. After the beats kick it up a notch, the ostinato gains a touch of distortion and the last section has a shape to it, justifying the slow slide toward the end.

All that said, Domino is the best track on the disc by leaps and bounds. David Verhoeven sings the the hell out of it, soaring like a young Michael Jackson. James Cannon had the mix, and he made it as poppy as only he can. The song is tons of fun and deserves a wider circulation.

All in all, the Techtonics made a very nice record which may or may not bear much resemblance to their live show. I'm looking forward to hearing more.

Groundbreaker by the Imperial College Techtonics is an enjoyable collegiate album. These solidly-performed eight tracks blend pop leads, collegiate backs, and the studio gifts of enhanced vp and special effects. But of course, being an all-male collegiate release, there's an extra helping of energy and a very light sprinkling of occasional goofiness. In the interests of truth in advertising, the album is not groundbreaking, even if the title makes for a fine pun. But it is a good listen.

Big Opener is best forgotten, and surely will be. Enjoying the quasi-dramatic chords and a mock "in a world..." voiceover requires a time machine or a good rock to have been living under. It's a bad start. But thankfully things get a lot better from here.

The upbeat and dance-ready No Tomorrow, Domino, and Earthquake are just ebullient; easy on the ears and nearly daring listeners not to dance.

The darker Dreadlock Holiday and Who Knows Who Cares brings the tempo down a bit but keeps the groove going strong, while Sunday Bloody Sunday embraces elements of near recitative before launching into its familiar intense rock march. House of the Rising Sun matches that intensity with its own lilting rock vibe.

Seventeen members are credited as performing on the album. But where US collegiate albums are often replete with seemingly infinite multi-tracks, the Techtonics preserve a sound with greater humanity by limiting those mults and giving more exposure to individual voices. But before pad-lovers pine for more, rest assured, studio effects provide plenty of sonic enrichment.

David Verhoeven is the standout pop-tastic soloist whose spectacular tenor easily raises quite a few scores. James Hayward arranged half the album and one can almost hear his developing skill.

Impressively, the Techtonics manage a fairly consistent sound, especially considering that they employ no less than four different producers. The match is no easy task, and some of that credit belongs to Dave Sperandio's carefully even mastering.

However, this British group desperately needs to review the dos and don'ts of Liner Notes. The group's most heinous offense is failing to credit even one composer, a failing one hopes that these singers will promptly rectify on their website.

Overall, the Techtonics are headed in the right direction. They are beginning to take chances with songs, to step out of the box. Future success lies in bolder choices, more dramatically appropriate syllable choices and deliveries (this is the biggest element of goofiness), and in finding an even more balanced union of the unamplified collegiate sound that walks in the studio with the enticing bells and whistles of the soundboard and the intimacy of the microphone. Groundbreaker may not shake your aca-world, but it puts the Techtonics on very solid ground.

The Techtonics have got a great formula going for them on their debut album, Groundbreaker: combine pomp and grandeur with a great sense of humor and a very British lightness. Groundbreaker is well planned and executed, and the whole album pops with vitality and driving energy.

Groundbreaker opens on a light note, with the goofy and over-the-top Big Opener. It straddles the line between artistic statement and skit, but the fact that it's so well performed really elevates it above the level of most a cappella humor antics. From here, it's into the strong cover of Orson's infectious No Tomorrow and we're off to the races.

The Techtonics are at their best when they get to spread their wings and soar. The expansive sounds of the two album closers, Sunday Bloody Sunday and the tongue-in-cheek Earthquake, fill the speakers with power and raw energy. Dreadlock Holiday features a convincing reggae groove as well as some very nice vocal bass work.

My major beef with Groundbreaker is rooted in its soloists. Strong group renditions of No Tomorrow, House of the Rising Sun, and Dreadlock Holiday are dragged down by lackluster vocal performances. The voices aren't the issue here, or even the suitability of the vocalists on the tracks; it's the failure of the soloist to match the energy of the backing track. Song choice also is a bit of a hurdle at times, with many of the songs on Groundbreaker falling into the "more of the same" category.

Groundbreaker is a strong debut album, one of the best in recent memory, and The Techtonics should be proud of their effort. With a strong set list and total commitment, there's no telling what these talented gentlemen could achieve.

Hard copies of the album are available from the Imperial College Union web site.