The Duke's Men of Yale 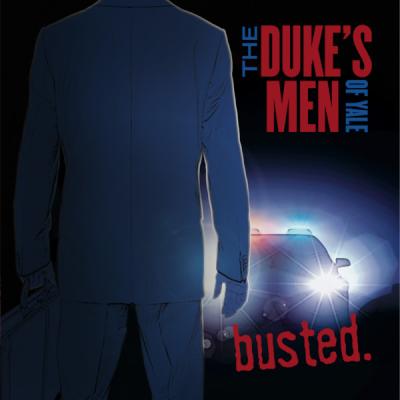 Busted. is easily the best collegiate album of the year. Many collegiate a cappella albums are better mixed and display better blend. Many are better to dance to. None showcase more boldly creative arrangements or more outright heart-stopping musical risks. The Duke's Men of Yale are unexpected, genre-bending, envelope-pushing and talented as all get out. How do I put this delicately? Buy this album; listen carefully. If you don't drop a STFU at some point, get your ears checked.

Busted. boasts a whopping eighteen tracks featuring seventeen different leads and a quartet. Every track was arranged by a Duke's Man. A few tracks are arranged well. The rest are arranged brilliantly. At the detailed level, the chord substitutions, syllable choices, dynamics and use of range are a joy. But it's the big picture that groups should pay careful attention to.

Busted. squarely designates the arranger as artist, equal to the composer, equal to the lead singer, and perhaps just a hair above them. Listeners may not love every musical choice (I didn't), but it's impossible not to love a musical world in which the original compositions are merely a starting point instead of a straightjacket. The result is so strikingly original it could readjust the scale by which collegiate albums should be judged.

Even a cursory listen to other collegiate groups reveals that beginning arrangers lean heavily on two skills: transcription (Look, it's the same, but with voices!), and mash-ups (Look I shoved another song in there!). The movie Pitch Perfect tells us that "mash-ups" are a breakthrough discovery made by inventive, hipster DJs. Hardly. Musical quotations have deep roots in the classical and jazz worlds, and even amateur a cappella groups have been using this exact technique for many decades. While it has its place, more often than not, it's used as a substitute for the far harder work of truly reimagining a piece. There is where the Duke's Men lay the smack down.

The album's lead work is also extraordinary, not for its perfection, but for its emotional resonance and fearlessness. These soloists attempt what others dare not dream: from the dizzying scat of You Don't Know What Love Is to the ledger-line-busting ranginess of What a Good Boy; from the ready-for-a-Tony sounds of It Started in the Winter; to the slow play pay-off of Let it Be. This is just a sampling. Choosing favorites is too daunting. With one foot in the worlds of musical theatre and even glee club singing, and another in the soulful, jazzy, riff-laden pop realm, the Duke's Men of Yale put it all on the line, song after song.

Busted. leaves me with only two real complaints: 1) the mix (but not the editing or mastering, both of which I loved); and 2) the liner notes. On the plus side, this mix is effected but blissfully free of excessive effects. Unfortunately, Ed Boyer allows these more exposed voices to fall out of balance far too frequently. Boyer has many times proven that he has the ears, so it's all the more frustrating to hear this somewhat sub-snuff result from such a well-established pillar of the community.

The credits are inconsistent, sometimes giving us the composers' names and then sometimes lazily dropping the ball and telling us only the "opb". Surely, Alex Ratner and Nimal Eames-Scott, composers of The One to Walk Away and Jeremy Lloyd, composer of It Started in the Winter would be alarmed to see the tremendous effort and creativity which they poured into their works covered by another artist and credited only to "opb The Duke's Men of Yale". So then how can the liner notes credit Let It Be to The Beatles instead of Paul McCartney, or Landslide to Fleetwood Mac instead of Stevie Nicks? A group this otherwise talented, professional and intelligent should make the proper corrections on its website (perhaps aided by my thoughts on Liner Notes Best Practices).

As it happens, Busted. is my last review of 2012 and I'm turning it in on December 31st. Talk about saving the best for last.

My first impression of Busted. was one of concern for producers Benji Goldsmith and Reuben Hendler; eighteen songs is an awful lot to put on an album, and strong album construction becomes a mammoth task when dealing with this much material. Luckily for all involved, my concerns were mostly unfounded. While Busted. could benefit from a healthy pruning, the album's numerous positives outweigh its length and it maintains interest throughout.

The Duke's Men of Yale are a talented bunch of gentlemen. The in-house arrangements are competent and often lovely, the soloists are committed and can really wail when needed, and the group's blend is impeccable. My problems with the album rarely involve the singing or the production, which is handled delicately and tends to showcase the singers at their best.

Song choice is a bit of a mixed bag. While Benji Goldsmith's take on And So it Goes has enough going for it to make me forget I've heard the song covered thousands of times, it seems peculiar to hear it so early on the album ... it definitely feels more like an album closer, even a bonus track when pitted against Adele, Beyonce, Carly Rae Jepsen, and Amy Winehouse. In fact, two rival factions seem to be at war on the album, modern pop favorites fighting tooth and nail against more traditional vocal jazz treatments of songs (And So it Goes, Singin' in the Rain, You Don't Know What Love Is, even a Cab Calloway-esque take on Valerie). It's not entirely unsuccessful, but when combined with the fact that the album is just too long, it ends up being weirdly off-putting.

The Duke's Men of Yale are big on reinvention, which helps the initial interest factor on the album, but not all their reinventions work as well as the originals. Rolling in the Deep's constant seesawing between feels and tempos robs the song of one its strongest original elements: that driving, insatiable pulse. Valerie dips deeply into goofiness early on, and ends up turning a light-hearted Amy Winehouse and Mark Ronson cover into a silly swing number with a strange mashup with Rehab added for good measure.

There are some nice touches on the album: the interplay between soloist and background vocals on Ego is fantastic, the traditional choral take on Lindisfarne shows off the group's vocal chops and pays homage to the original's sound without copying James Blake's shtick, original tune It Started in the Winter is a nice addition to the album, and The Way You Make Me Feel's comfortable feel is a real treat.

Busted. is far from a bad album: there's a lot to enjoy listening to here. However, the disparate elements making up Busted. never quite form a cohesive whole. Too many moments seem grabbed from entirely different a cappella groups, and The Duke's Men of Yale never entirely develop a distinct group sound.

To keep a streak going, sometimes you have to quit while you're ahead. The Duke's Men of Yale could have put together an album of ten or twelve songs and come away clean with a job well done. Instead they stuck it out for eighteen tracks (an indulgent 74 minutes) and wound up with a somewhat Busted. effort.

In the defendant's defense, there is plenty of genuine a cappella goodness to be heard. As they tout in their insert, there is a rich mix of genres with able soloists and minimalist production that can appeal to any generation. The arrangers embellish with a signature classic-jazzy Duke's Men style that after 74 minutes you either learn to love or hate. Of their covers, I was most impressed with Rolling in the Deep, Landslide, and Valerie (actually an Amy Winehouse mash-up). These three songs have just about run the gamut on the collegiate scene, but arranger Benji Goldsmith proves that they can still warrant a spot in the repertoire (and an all-male one at that!).

I'd love to call a few more highlights to the stand. It was exciting to hear the Duke's Men include not one, but two original pieces on the album. The collaboration, poetry, and arranging on both The One to Walk Away and It Started in the Winter show a sophistication well beyond the age of boys-will-be-boys. Tack on a haunting rendition of Lindisfarne (sans vocoder), and a flying scat solo on You Don't Know What Love Is, and you have the vocal equivalent of a perfect crime.

Unfortunately, there is a good bit more at the crime scene. Exhibit A for quitting while you're ahead is What a Good Boy, which simply doesn't live up to the award-winning recording from the previous album. Ego, Call Me Maybe, and The Way You Make Me Feel are just too slow and croonery to retain the spunk of the originals. There's Hope, Let it Be, and And So it Goes are pretty until they work themselves into syllabic mayhem at their respective bridges. And I can't for the life of me figure out why Singin' in the Rain is a brand new arrangement in the 21st century. None of these songs is guilty on its own, but clump them all together at the back of the album and you start to forget all the reasons you fell in love with the Duke's Men.

It would be easier to appreciate the music of Busted. had it been released as two more focused albums. Complex harmonies, arrangement tricks, and even the uniform crisp production are charming in small doses but feel overplayed when you listen from cover to cover. I suppose in the era of playlists, listeners just cherrypick their favorite songs from albums anyway and thus the more content the better. But shouldn't we trust the Duke's Men of Yale to cherrypick for us? Case closed!

This album is available on iTunes and at www.dukesmen.com.