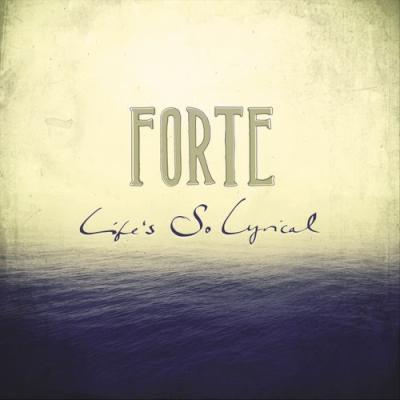 All too often, academic a cappella may be succinctly described in two steps: imitate, graduate. Performing the music takes precedence, followed by the business challenges and social benefits of keeping a group in motion. Add the task of keeping up with real life and who has time to innovate?

For those who stay with a cappella past graduation, the state of a cappella's originality becomes an ever more pressing concern. Much like the fast food that comprises so much dining in the academic years, covers, covers of covers, and covers mashed-up with other covers is not a healthy long-term a cappella diet.

Like fresh squeezed juice for scurvy-ridden sailors, Life's So Lyrical is both delicious and desperately needed: ten originals, two remixes and no covers. And they're pretty awesome.

Even if every song sucked, that would still be an impressive achievement, and one made all the more incredible by virtue of Forte's status as a high school group. So how do we measure the achievement when these songs are artfully penned? When the lyrics bring unexpected turns and emotional responses? When the soloists sing with energy, fragility and authenticity? When the hooks stay with you, after a single listen? That is pure excellence. And it is exactly the kind of excellence the aca-community needs most.

With arranging help from aca-luminaries like Robert Dietz, Ben Bram, Deke Sharon, Chris Diaz and Nick Girard, and mix work by Ed Boyer, Plaid Productions, Liquid 5th, Girard, James Cannon and Tat Tong, Forte delivers a strikingly mature and varied album. Top notch mastering by Dave Sperandio does a good job of wrangling this diverse crew into a fairly unified sonic space, but the impression listeners will leave with is one of diversity.

Each song is worthy of its own review, but to give listeners a sense of things we'll address just the flavors. Feelin' Alright, A Clockwork Mess, and To Be Determined bring a bright, angsty, hook-laden skater-pop sound. Life's So Lyrical and My Hat is Awesome have the quirk common to female artists like Feist, but both bring more edge to their leads. Before I Met You is a worthy successor to the vibe laid down in the Eagles' Hotel California. Celebrate is exactly what you want in a dance track. I'm Coming Up rocks the rap-sing approach that works so well for groups like Outkast. Mannequin is a duet that could easily have been on a Sara Bareilles album. And Walking Out the Door will delight Jewel fans who crave both sweetness and strength.

Well worth the purchase, one can only hope that all these young singer-composers continue the journey so successfully begun with Life's So Lyrical.

"Life's so lyrical, and music's a miracle." — Life's So Lyrical

Here's the part where I finally say something new in a RARB review: it doesn't matter if the music on Life's So Lyrical is good or not. When an a cappella group writes a full album of originals, you know you'll be listening. Make that high school students, as we have here, penning all new material (from many different students in the group, no less), and you know that you must buy their release to support these teenage all-stars and encourage similar projects. For our affecting subculture of a cappella madness, this is history.

"You are something, greater than me." — Before I Met You

But lucky for our world, the music is good, and the leads bring the required vocal personality to make their (very own) songs memorable and unique. If you're curious about the overall vibe, I personally hear influences from Owl City, My Chemical Romance, Usher, Blink-182, The Dixie Chicks, and The Band Perry. (Someone tell me if I'm close.) It took a musical army to pull off the very grand and very fine idea that is Life's So Lyrical, and it really sounds like the arranger and mixer generals had a ridiculously awesome time taking us from pop, to club, to techno, to punk, to rap, to folksy-country while bringing the composers' ideas to fruition. This is the part where I mention the ambition level here between the songwriters and collaborators: it's illegally high, but whew, they're all generals and above the law. Talk about total project management (Mr. Spalding!).

"Watch me release the animal you made." — Celebrate

The end-result awesomeness of nicely scored compositions coupled with enhancements from the best pros in the biz didn't surprise me, but the heavy messages did: there are multiple "better off dead/waiting to die" expressions and themes that roll by on this album. But these are legitimate artists, and all artists have a dark period in their work cycle. (Push through the uncomfortableness of hearing young people sing such things, because there is some.)

"There can't be shadows without the sun." — Feelin' Alright

I'm extremely hesitant to highlight moments when this is so very clearly a (massive) group effort, but I simply must shower a little extra praise for Mannequin, which I scored a 5+. Carried with a rock-opera swing, Mannequin is blissful drama, and if I haven't heard Chris Jobe on the radio yet, I know his day is coming. And here's a bit more praise, for the lyrics of My Hat is Awesome, which are startlingly clever and captivating.

"I will find a way to you, I will fight to fill this space." — My Hat is Awesome

There's a sophistication to the creativity here that's rare for any level. Come hear how Forte changed the game with Life's So Lyrical.

Life's So Lyrical is a release that any modern musician can admire. More than half the members of Forte harnessed their imaginations for lyrics and melodies into ten original compositions. They had the networking prowess to solicit arrangements and production from big names like Robert Dietz, Chris Diaz, Ben Bram, Deke Sharon, and Nick Girard (go ahead, look them up). On top of that, Forte has been savvy enough to build a social media presence with music videos and a Kickstarter fundraising campaign. Forte has set some lofty goals for itself, and Life's So Lyrical shows that these singers know exactly how to achieve them.

The planning and collaboration that went into this album could not have come together more smoothly. Life's So Lyrical lures you in with the peppy subdivisions of Feelin' Alright and the title track. It melts your heart with the chilling harmonies of Before I Met You and Walking Out the Door. It gets your toes tapping with the driving beat of Celebrate and I'm Coming Up. Just when you think you've heard it all, James Cannon and Tat Tong tack on amped-up remixes that make your head spin. And it all fits together. Even with ten composers, eight arrangers, and nine studios involved in post-production, every moment of the album sounds like it was born from a singular creative mind. Kudos to Music Director Ben Spalding for bringing together so much talent under such a delightful project.

This is an album that would be right at home on a pop radio station. You can hear Bonnie Raitt channeled through Walking Out the Door, Kelly Clarkson in My Hat is Awesome, The Script in To Be Determined, and One Direction in A Clockwork Mess. The themes and stylings are all there, and the editing and mixing is squeaky clean and bright. Aside from some tacky phasing and EQ on the bridges of Feelin' Alright and Walking Out the Door, the producers opt for natural-sounding voices that retain a refreshing amount of color and depth. If you love the energy of pop a cappella but are sick of hearing the same covers of Adele and Michael Bublé, this is just the album for you.

Did I mention that Forte is a group from Centerville High School? In our review of the group's last release, 2 the Wire, RARB was critical of the tonality and creative decisions that high schoolers have to offer. Sure, the lead male vocalists still sound a little tinny at times, and the lyrics occasionally fall back on cliché metaphors. For the amount of courage it takes to publish original lyrics and pour such an obvious amount of passion into them, I'm okay with a hint of juvenility. Life's So Lyrical is catchy, and I'm thrilled that Celebrate Remix earned recognition on the CASA Sing 9 compilation. Ben Spalding and Forte are building up steam in all the right ways, and Life's So Lyrical is just what they need to really take off.

This album is available from the group's web site, iTunes, and A Cappella Records.