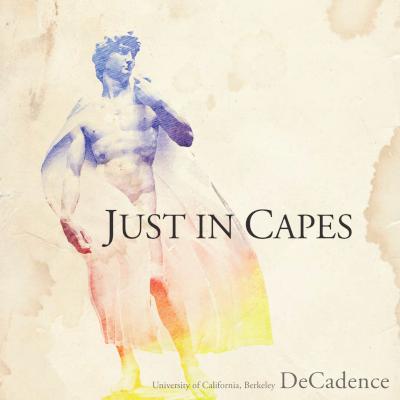 The first six tracks get your blood pumping. This group has a ton of energy and sells everything it sings. Drumming Song is a thrilling opener — I love Tom Griffin's arrangement, because it has real vision. The verses build nicely into the driving choruses, and the bridge is tense and dramatic. If only the climax lasted a little longer. Robots will make you smile. Not all the jokes land, but the arrangement and vp are great, and it's a very effective track. More groups should record the works of comedic songwriters like Flight of the Conchords and Weird Al. And Hannah Glass' lead on Valerie is mesmerizing.

But after a strong start, the final four tracks are forgettable. What went wrong? The original version of Kelly Clarkson's song Gone is unremarkable, and this arrangement doesn't bring anything new to it. The repetitive homophonic backs in the verses are a weak choice, and the choruses are an unfocused wall of loud. The song lacks direction. It just seems to alternate between verses and choruses. Where is the climax of the song? What about phrasing? There's nothing musically satisfying about Forget You, and after three years I no longer find the joke of the song funny. The mashup of Love The Way You Lie, Dynamite, and Teenage Dream is long and boring. Backs, like in the original songs, are uninspired and repetitive. They may share similar chords, tempo, and style, but there is nothing interesting — musically, lyrically, thematically — about the juxtaposition of these three songs.

There's a lot to love on this album, and I definitely recommend it. In a sea of generic a cappella covers, Decadence's unique personality shines through on Just in Capes. But full-length albums are a test of endurance, and here Decadence comes up just short of excellence. If the caliber of its material stays about the same, Decadence should consider making its next release a killer EP so it puts only the group's best foot forward.

At first glance, Just in Capes seems like any other collegiate a cappella release. It's got everything you'd expect: Mariah, Michael Bublé, and Cee Lo. The album even features a cover of a cover: Sam Tsui's epic Love The Way You Lie/Dynamite/Teenage Dream mashup is sung nearly verbatim and doesn't offer anything new or interesting. Though these choices are as predictable as any, this release from DeCadence has a sprinkling of unique offerings that give it a nice balance.

Among these refreshing choices is the inclusion of Robots from Flight of the Conchords. The track is musically well done, with a soloist who hams it up and an arrangement that doesn't detract from his entertaining narrative. Recording the track for an album setting has allowed the group to take advantage of technology to create a truly robotic voice and funky sounds that make the song believable. What really stands out, though, is the message that this song choice sends: DeCadence tries not to take itself too seriously. This attitude is rarely seen in collegiate releases anymore, and it's such a relief to hear singers who sound like they truly enjoy singing. I don't doubt that the background singers on Forget You were laughing between takes, and Valerie is fun in its simplicty.

Sadly, this isn't exactly prevalent throughout. It's mostly the soloists who sound like they have trouble relaxing; Sparkling Diamonds and Forget You certainly beg for more attitude than what we are given. Kelly Clarkson's Gone — while an interesting and welcome departure from the incredibly overdone Already Gone — needs more anger. And Emotions is barely passable entirely because of a weak solo. If only these singers could channel the same energy they give their backs!

It may not be the most new and innovative thing out there, but Just in Capes is worth picking up if you'd like to hear collegiate singers do what they're supposed to be doing: making good music and having fun.

More than a few collegiate a cappella groups over the years have crowed about their "quirkiness" or "fun-loving" nature in liner notes, only to reveal a relative lack of either trait. UC-Berkeley's mixed group DeCadence not only embrace and exhibit both on its new album, Just in Capes, the group's "unconventional gaggle of crime-fighting, booty dropping vocalists" are clearly capable of so much more. Just in Capes is an album of high-energy songs, half of which are not just eccentric and fun, they're also smartly arranged, sleekly and cleanly produced, and engaging. This part of the album is also, unsurprisingly, the half where the group seems to be having the most fun singing.

When it's working, Just in Capes has infectious energy (songs like Valerie and Sparkling Diamonds), personality (the silly and futuristic Robots, the bombastic and hedonistic Sparkling Diamonds), and a deep and varied collection of percussion sounds (Drumming Song, Cry Me a River, and Valerie). The album hits its stride starting with the punchy and swanky Cry Me a River. The next track, Renegade, features effective dynamics, transitions, and momentum. Robots is better than the original with its shiny electronics and terrific use of pitch correction to simulate robotic conversations easily exceeding the tame acoustic guitars of the Flight of the Conchords' version. Valerie is bouncy, soulful, and crisp. Each of these tracks is more fun than the one preceding it.

When things are not working, songs are clean and sound fine but are far less interesting. There's nothing especially unique or engaging about Forget You, a song which reached its expiration date several years ago, or Emotions, one which reached its expiration date several decades ago. Other than Hannah Glass' playful and terrifically-controlled lead on Valerie, the soloists are adequate but rarely impactful.

The songs which seem out of character for DeCadence, such as Gone, Forget You, and the Mashup featuring songs by Rihanna, Taio Cruz, and Katy Perry, are those most directly lifted from recent pop charts and least imaginatively arranged. This suggests that DeCadence is more comfortable staying away from such well-trod pop fare, and that's not a bad thing. In fact, with the competitive world of collegiate a cappella, it can only help them that there are far fewer, if any, versions of Robots or Sparkling Diamonds out there.

DeCadence does an exemplary job with its liner notes, not only crediting the original composers and arrangers, but also clearly and expansively crediting its own creative team, including the music directors and sound engineers, and external contributors such as editors Plaid Productions and mixing/mastering engineer-slash-genius Bill Hare. It warms my cold, jaded heart to see credit awarded to the people who almost certainly put in very long hours to make this album sound as good as it does.

The members of DeCadence self-identify as crazy, fun-loving, and eccentric. Two of the best songs on the album, Robots and Sparkling Diamonds, demonstrate these traits to great effect. If the group can further embrace such traits in choosing songs for its next album, DeCadence is bound to produce something truly unique and memorable.

Purchase a physical copy from the DeCadence store.