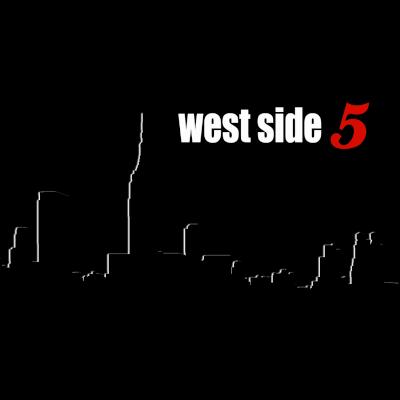 West Side 5 could only be a New York group. Nowhere else could have produced such a maddening mix of talent, excellence, and (cue diva voice) acting. I, it should be said, do not live in New York. I enjoy acting in person, but I find it tiring on a recording. This includes overt acting, like the kazoo verse on Call Me Irresponsible, and also can't-help-it acting, like almost every time soprano Lara Hirner gets to sing words. I don't know a thing about her except what I've heard here, which gives the impression of a great talent, arm outstretched, singing to the front, back, and middle of the house.

All this acting sneaks up on you. The first time I listened to this record, I was blown away by the many pure chords, the wide range, the musicality and the overall chops. That impression lasted maybe twice through. Then I started thinking, did they have to start with Take the A-Train? It's got great energy, it opens the show, but the dissonant train chords make it difficult to shift gears from whatever I was listening to before. It's really good, it's just a bit wrought and it weeds out the casual listeners from the devotees. Somehow I don't think that's what they were going for.

Then there are the solos. The soprano gets most of them, generally piling on the breathiness, vibrato, and/or expression to wring each line dry. By listen number five I sort of wanted to stage an intervention. The wordless chords are so pure, so lovely, so clear! Can't she use that pure straight tone on at least some of the lead lines? Apparently not, or at least she chose not to. Which is really hard to ignore.

West Side 5's group sound is thoroughly anchored by that instrumental-soprano clarity. In the backgrounds it sounds so clean, no matter how high it soars and how high the spread. Take the A-Train, In the Wee Small Hours of the Morning, take your pick: the other voices sound pretty good, but they rarely get a full turn in the sun. This group has thrown its lot in with its soprano; whither she goes they go too. And did Someday My Prince Will Come really need to go so high? If it weren't so deadpan Disney, it would almost be funny, and who knows, maybe in their live act it is.

Nobody But Yourself is the reason to buy this disc, and a very good reason it is too. The group's baritone, the very talented and sweet-voiced Eric Hughes, wrote this song using text from an e.e. cummings poem, and it is gorgeous. I hope he publishes it and it catches on, for small groups and choirs and anyone else who might want to sing it. Hughes also shines on the lead and scat solo of I Fall in Love Too Easily, a wonderful take that is just shy of perfect because the vocal trumpet solo is mixed ever so slightly too loud compared with everything else, at least with the default settings on my music player. (I'm willing to fault my own gear here — this is really a standout track). Self-Absorbed also seems to be a brand-new composition — I don't love the performance as much but I love that they did it. New material is good.

This album ends in the way that I wish it began, as the pure smooth final chords of Pure Imagination deliver everything I've been asking for. In the same vein as their take on Puerling's arrangement of Try to Remember, the song starts out strong but a tad on the dramatic side. As it moves on, the sound gets sweeter and more delicate, closing out in a shimmer of loveliness.

See, what I want from a vocal jazz group is something easy, that I can swoon into over and over again. I want soul and clarity and not just performance but music for music's sake. West Side 5's sensibility goes in a different direction, at least for now.

If you are any sort of fan of vocal jazz, you're going to love this album. I myself am not especially a fan of the genre, and even I found this album quite endearing. As I listened to it more and more (probably seven or eight times total), I found most of my tentative "4" ratings turn into "5"s. It's outstanding.

First and foremost, these singers can really sing! As you would guess from the group's name, there are five singers — two females and three males — and every one of them is top notch. Really, the quality of musicianship is amazing. The hand of the producer is very subdued, so you can tell nothing is camouflaged. And nothing needs to be! All voices shine through, and every person is on the beat, in tune, and giving an A+ effort. The group just clicks.

For most tracks the group behaves like a traditional jazz combo. The bass mimics a string bass, the vocal percussionist (not actually a part of the eponymous 5) mimics a small jazz drum kit, and one can almost hear the clarinets and trumpets. They sound quite a bit like The Real Group — although in the interest of full disclosure, I only have three Real Group albums and I believe the most recent is seventeen years old. So perhaps we can say West Side 5 is a throwback to The Real Group of the mid- 90s ... who are in many ways themselves throwbacks to an earlier era. Back to WS5: most of the tracks on the album are jazz standards that many listeners will recognize from somewhere, as one can easily see from the track list.

To give you a flavor for some of my favorite tracks, Someday My Prince Will Come starts off very slow but then picks up about a minute and a half in. The remainder features melodic sections alternating with jazz riffs. Lullaby of Birdland also has riffing in the middle, with a two minute long "instrumental" section that is captivating. The two exceptions to the "typical jazz group" are each successful in their own right: Nobody But Yourself is a contemporary setting of an e.e. cummings text written by West Side 5 baritone Eric Hughes (with flavors of Eric Whitacre that I loved). Call Me Irresponsible is very barbershop-y most of the way through and also quite fun.

To wrap-up, I have to say that the liner notes made me smile when the group offered thanks to RARB's Jonathan Minkoff (co-producer) for "understanding we were broke, but still worth it." There's got to be a good story there. But I completely agree with Jonathan — this group and this album are definitely worth it.

West Side 5's self-titled album can best be described in the following words: smooth, fun, playful, tight, and well-thought-out. Each member of this vocal jazz quintet is a natural at what he/she does and it sounds as if this album was produced with relative ease. West Side 5 delivers all of the expected qualities that are standard for a jazz album: tight harmonies, complex rhythms, and a vocal ease to make it all seem cool. It is in some of these expected, rather predictable moments though that this album holds itself back from being better.

West Side 5 is jam-packed with engaging and enjoyable arrangements. All twelve tracks are indeed worthy of being on this album; none is the odd man out. Someday My Prince Will Come and Nobody But Yourself are two of the standouts. Someday My Prince Will Come (of Snow White and the Seven Dwarfs) is a smooth and jazzy rendition that still manages to keep the feel of the original, while creating a unique identity of its own. Nobody But Yourself is hauntingly beautiful with effortless transitions through brief moments of silence, which captivate the listener's ears in the best kind of way.

I Fall in Love Too Easily also deserves recognition. All parts of this song complement each other very well, from the very present bass, to the awesome vocal trumpet, to the stylish vocal percussion ... all of these factors work well together to create a live cabaret type atmosphere. What helps to create stellar moments not only in this track but others is the addition of John Shumway. From scat solos to vocal trumpeting, his subtle appearances really help to capture the complete jazz essence.

The major area where West Side 5 falls short is in song variance and not fully capitalizing on the more well-known songs. Call Me Irresponsible and Pure Imagination, while good, feel as if they are not quite up to par with the other tracks. Little things such as a quicker tempo and less dramatics on solos could have easily helped these selections. And while all these songs are pleasing to the ear, I could almost predict what was coming next with the following track. In the scope of a jazz-enthusiast, the group is spot on, but to the average listener a bit of diversity is lacking. Jazz interpretations of songs from other genres may have been a possible remedy.

All said and done, this is an impressive album. This is truly the work of five talented vocalists. I am willing to bet that West Side 5 will have new fans far and wide, including this reviewer. So, get moving on grabbing yourself a copy.

West Side 5 is available digitally, or as a physical CD.