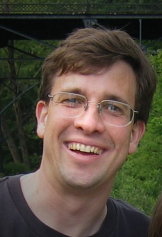 John has been a fan of contemporary a cappella music since discovering The Nylons as a freshman in college in 1988. His passion did not become complete, however, until near the end of his graduate school studies in physics at U.C. Berkeley in the late 1990's where he became a huge fan of the California Golden Overtones and the U.C. Men's Octet, attending nearly all of their concerts as well as their weekly outdoor practices/performances. He decided to "give back" to a cappella in 2008, becoming a RARB reviewer and CARA nominator/judge.

While a student at Brigham Young University, John sang in two collegiate choirs, and played trumpet in two collegiate bands. Now back at BYU as a physics professor, John lives in Orem, UT with his wife Pauline and their two children. John has been the faculty advisor for the BYU A Cappella Club since 2012, and sings in and arranges music for the club officers group called "The Staff". He has been a director, accompanist, and singer in various church choirs for the past 20+ years, and since 2016 has been the choir director for his current congregation. Besides music, physics, church, and family, John spends much of his spare time playing table tennis and cheering for the Utah Jazz.