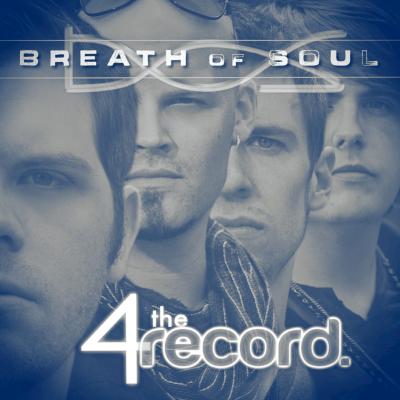 Unexpected arrangements, sudden tempo and feel changes, and smooth R&B and country leads give Breath of Soul both familiarity and an instantly recognizable, nearly unique style. Listeners will cock their heads sideways wondering why certain musical choices were made and then abandoned: straight to swing to reggae to two-step to dubstep in a single song (Rolling in the Deep). But in a world where so much a cappella is completely, wrist-slitingly predictable from start to finish, the men of Nashville-based Breath of Soul stand out. Their sound is mainstream, but their choices set them apart. And their charisma and talent make even questionable choices easy to embrace. 4 The Record is a fan-maker. It just gets better with each listen.

Originals Give Yourself, Bee, and Fix You, Fix Me are so catchy, so earnest and so confidently sung that you'll swear you've already heard them; easily some of the best originals in contemporary a cappella, and note for note, lyric for lyric, better than the album's covers. This alone is worth the price of admission.

The experience of listening to the massive mash-up, Michael Jackson vs Queen is a quintessential example of Breath of Soul's bold arranging choices. Every lead is compelling and heartfelt. The blend is sweetness itself. The song snippets, however, are piled and intertwined like the fragments of a schizophrenic's personality. (The arrival of Bohemian Rhapsody almost leaves the listener bruised.) But, somehow, this is just the kind of schizophrenic that you'd talk yourself into dating.

The feel changes work best in the originals, Bee and Fix You, Fix Me, where the breakdowns feel organic, almost spontaneous. House of the Rising Sun's upbeat country mixed with quasi-dubstep seems less organic and more theatrical. The result is one part gothic, one part paint splatter, and one part dirty south.

Though the leads will make you a fan from the get-go, and the bass singing will melt hearts, a strong element of the sound is Jake Black's beatboxing. It drives and kicks, breathes and dribbles, and despite all the studio's dark temptations, never lets its humanity disappear. It's also refreshingly free of the sample library sound that college groups have been pretending came out of their mouths for the last half decade.

It's been a long while since a hot, new vocal band captured our attention with originals this well-crafted. Breath of Soul's southern pop is just what the contemporary a cappella scene needs, and not a moment too soon!

Some people have a playlist for every mood and occasion. Digital devices and apps allow us to program our listening habits in countless ways and combinations. Why do we do this? Because how we absorb and react to music is often highly dependent upon our mood or surrounding atmosphere. Workout playlist? Upbeat, fast, and loud. Lazy Sunday afternoon playlist? Relaxed and unobtrusive. With its new album, 4 The Record, Breath of Soul has managed to create an entertaining album that is both simple and complicated, and will likely satisfy a wide variety of musical cravings.

Breath of Soul's 4 The Record features a 4-man vocal group from Nashville who have compiled a smart, catchy collection of tunes both old and new. The songs are simple because the group resists the urge to use the studio as compensation for its small size. Arrangements are typically four or five parts, making them perfectly replicable in a live setting. The group avoids beefing up the texture, something many groups do to keep the listener engaged. For the most part, Breath of Soul does such a terrific job keeping arrangements entertaining that the number of voices becomes an afterthought. Sure, the charts are lean and sparse with a solo and vp, leaving only two or three voices to cover the backs, but they're also clean and crisp. The songs are complicated because arrangements successfully and creatively avoid static repetition. I've heard it preached that arrangements should offer the listener something new every six to eight seconds, and while it sounds great in theory, I've been somewhat skeptical until now. With most of the songs on this album, however, majority arranger Jesse Upah uses this difficult approach effectively. Sometimes, the group drops a part or changes a rhythm; other times, it changes up the entire beat or timing of the song or trades the solo. Often, the group does many of the above. The result is compelling, a consistent turning of the page within the confines of a 3:00 (or less) song.

I've probably heard more than a dozen versions of songs like Bad Romance, House of the Rising Sun, and Rolling in the Deep, but few are more listenable than these. The Michael Jackson vs Queen battle is a smart and seamless collection of some of the best hooks from two of the hookiest (and most successful) pop artists of the past forty years. And originals, especially Give Yourself, are promising.

If there's one thing I'd like a little more of, it's grit. Everything sounds great, but it might be a little too sanitized and clean as an overall product for some. As with other groups (like Straight No Chaser and Rockapella) who are disproportionately popular outside the insulated a cappella community, this kind of approach makes everything more accessible to the general public. Considering the success of these groups, I can't begrudge Breath of Soul the strategy, but with the brains and talent at play here, I'd love to hear them muddy the waters a bit.

This album may not be perfect, but it is very appealing. 4 The Record is good for the car. For the gym. For everyone.

With a cappella music gaining more popularity in today's culture, we are seeing the emergence of smaller, semi-professional groups, which seem to be the ideal route to go. Breath of Soul has been around since 2009, and while there may only be four members on this release, Breath of Soul's sound is anything but small.

4 The Record carries plenty of style to show that these men are indeed from the south. These gentlemen have produced a fusion of genres, mixing pop, rock, and soul. What also helps this album stand out is the unique beatbox-infused element, whereas many groups tend go the route of traditional vocal percussion. Jake Black does not simply incorporate a standard imitation of basic drum sounds; rather he uses every sound in his arsenal to really add life to the arrangements.

Each track on this album is definitely enjoyable. What Breath of Soul does really well and has a knack for is changing up the groove of a song almost instantaneously. This effect is most notable in Bad Romance and Rollin in the Deep; two very heavily covered songs which need this new element to make the arrangement stand out. And although there are only four members of the group, arrangements are surprisingly well thought-out and sound full. Pumped Up Kicks leaves no doubt in the listener that four individuals are performing, but the finished product is cool and current, with tasteful effects.

House of the Rising Sun really capitalizes on the style of the group as they perform a genre I only know how to describe as "southern soul". The major elements to note with this track are the beatbox breakdown section, which is rather cool, and the group's ability to create such a full arrangement. One of my favorite tracks is My Last Season (an original by Cory Hosler), which is quite the shift from the rest of the album. The emotional appeal is present, which is due to some great lyrics and an energetic arrangement.

While Breath of Soul is mainly successful in most of its endeavors, there are a few that just fall short. The group's Michael Jackson vs Queen mash-up is good, but transitions are too abrupt for my taste. I Won't Give Up has energy, but this is probably the one track where we could use a few more layers in the arrangement. And overall, their style is present, but I feel that the group has the potential to be a bit more innovative with some of their work.

All things considered, Breath of Soul features some really talented singers — it's been quite some time since I've been impressed with an album that only has four members. 4 The Record is worth a listen.

This album is available through iTunes, Amazon, Loudr, eMusic, and the group's website.