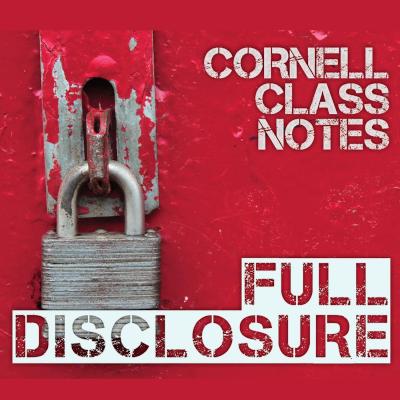 These days, the technical demands of pitch and rhythm and even fullness of sound are handled by studio technology and busy producers. Skilled singers are appreciated, but no longer required. Nearly every release is stunningly accurate and Full Disclosure is no exception. The wince-inducing clunker notes of yesteryear are all gone. The sampled, processed vocal percussion is radio-ready. The bass is octave dropped. The resulting enhancements are easy on the ear, but it all has a homogenizing quality, especially among collegiate groups covering pop rock. The Class Notes fall right into this danger zone.

With technical elements universally achieved, the spotlight falls more heavily on artistry than ever before. Excellence today is about choices, not accuracy. Song choice, style, tempo, dynamics, arranging, variety, texture, emotion, personality, authenticity. The pressure to make bold choices in these areas is overwhelming. What the Class Notes do instead is to set these to autopilot and just belt it all out with style, energy, and charisma.

Listeners will appreciate the intensity of Battlefield as well as the effectiveness of its artificial sounding backs. Streetcorner Symphony boasts some of the most energetic shout-chorus moments of any collegiate group. Set Fire to the Rain maintains a very Adele-like quality and fans of the original will likely enjoy the Class Notes' rendition.

The group's many electronic enhancements are well-balanced with more human sounding backs. The two together create both a contemporary pop sound, and simultaneously that goofy collegiate sound that evokes both pop choirs and semi-circles of nonsense syllables. The impact of this kind of recording depends heavily on your own personal relationship with this style of a cappella. But the Class Notes do wisely relegate the goofy syllables to a minimal role.

To get to the next level, the Class Notes will have to fully embrace the challenge of originality. Until then, Full Disclosure offers some good, respectable performances that they and their fans can be proud of.

The singers from the Class Notes put their best seven tracks forward, and their selections are pretty fun to receive. Super pumped backgrounds, thoughtful arranging, pristine production, and leads that really dig into their material makes Full Disclosure an easy sell. The Class Notes have an up and down history at RARB, but Full Disclosure is certainly in the "up" column.

My favorite two tracks open the album. Best Thing I Never Had is a shimmering piece that delivers everything you want: a soulful lead, full excited backs, dramatic dynamics, and a tight rhythmic foundation. It's simply the kind of song that you listen to again right after it finishes. Several versions of this song passed over my desk the same time the Class Notes' did, and this is the one I keep coming back to, for a charming honesty factor that's just hard to replicate unless you really feel this song. As for Battlefield, it's super catchy and addictive with excellently handled choruses. I'm telling you, there are some truly unruly aca choruses for Battlefield out there (especially in the live circuit) with all manners of "hoot hoot!"s and "woop woop!" action, but this presentation is just straight energy and drive.

The rest of Full Disclosure is more mixed, but everything is fully listenable at worst, and rather interesting at best. When the backs nail their parts on Full Disclosure, and they often do, it's just PROPAH; we are treated to a real ensemble sound in a field that's otherwise populated by soloist wildflowers. You'll enjoy the big swells and high energy from these backs in Streetcorner Symphony. And though it's a few ticks too slow, you'll enjoy the lush soundscape the backs and production create for Perfect, where beautiful harmonies reign supreme. But, some oddities occur with Breakeven that pulls down the middle of the album. That brief vocal rhythmic manipulation at 1:29 isn't quite there, though it's a solid creative effort. And, the strongest versions I've heard of Breakeven really highlight the emotional dissonance underneath by jamming the voice parts against each other hard, but the phrasing and rests don't allow for that here (there's a missed opportunity for this effect from 2:24 — 2:43, even though again, I appreciate the creative effort). Set Fire to the Rain is perhaps too straightforward, except for the sweet authentic drum roll that goes flapping by like a bat. Thankfully we tick up again with easy-jammin' Misery before hitting Perfect in the sweet spot.

It's too bad the liner notes are so very sparse and don't include composer credits — and I presume Liquid 5th handled this lovely production, but it's not actually clearly stated. But, I still like this release. It's very well sung, and appropriately mixed. Nice job, Class Notes.

The phrase "full disclosure" suggests an aversion to holding back, or perhaps a strong desire to share or communicate important ideas or thoughts. The album Full Disclosure suggests that Cornell University's mixed group the Class Notes is capable of earnest and energetic singing, passionate and thoughtful solos, and powerful breakdown sections.

Capable, however, does not mean consistent, and that is the fatal flaw with this album. At times, the group shows flashes of energy, particularly in Battlefield, Perfect, and parts of Breakeven and Misery. Other times, the group simply sags behind the soloist.

For example, Maya Gunaseharan is electric and committed in Best Thing I Never Had but her performance is undermined by the voices dragging underneath her for much of the song. Gwendolyn Waichman (Battlefield) and Lacey Steinel (Perfect) are better served in their powerful solos, where the backing voices provide stability and sizzle.

Arrangements on the album are inconsistent as well, with a few offering thoughtful textures and growth (Battlfield, Perfect) while others (Streetcorner Symphony and Set Fire to the Rain) are mostly stale and static. Rarely, the arrangers take risks such as the "pieces" cluster in Breakeven. Even if risks like this don't always work, the group could use more spontaneity and personality injections into these oft-covered songs. There are, however, breakdown sections in a few of the songs which work really well (Battlefield) and are often the best and most energized part of the respective songs (especially in Streetcorner Symphony).

Some might consider it galling for the Class Notes to insist that their music and artwork is copyright-protected and the unauthorized use thereof is "strictly prohibited" when the group fails to credit the original authors of all the songs they cover, instead offering the thoroughly inadequate "OPB" form of "credit". Indeed, it is not even clear whether the group properly licensed the rights to perform or record any of these cover songs.

With Full Disclosure, a collection of pop radio staples, the Class Notes offer little new or interesting to the collegiate album catalog. They have some well-performed, if not innovative, versions of commonly covered songs but there is little to make the album stand out other than several talented soloists and a few bursts of energy in the backs. Full Disclosure may feature some moments of honest, earnest singing, but too often it feels like a group holding something back.

Available wherever online music is sold.