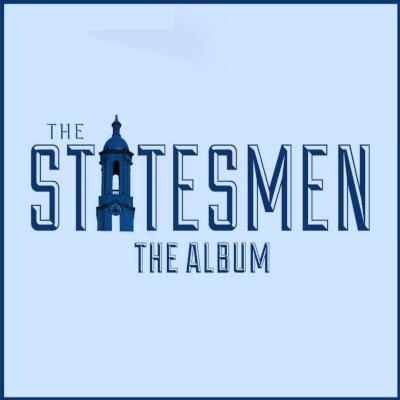 By starting their album with a rousing little fanfare in honor of their school, Penn State's The Statesmen set the tone for one of the peppiest collegiate a cappella albums in recent history. In a field that's becoming increasingly dominated by dour, dark interpretations, The Statesmen's energy and old-timey enthusiasm is a welcome throwback.

While the album contains a number of school spirit songs, they don't ignore the pop covers either. Well-performed versions of Ladies' Night and It's Gonna Be Me succeed where many other a cappella groups have failed — enthusiastic without becoming corny, wry without devolving into winking irony. Also, it should be pointed out that this is one groovy album. The bass/percussion interaction is terrific, and the soloists completely throw themselves into the songs. Nothing feels hesitant or held back here; The Statesmen are dedicated to the album 100%, and even in today's more competitive a cappella climate this is a rarity.

For all their energy and enthusiasm, The Statesmen aren't slouches when it comes to ballads, either. I Will Follow You Into the Dark is a gorgeous arrangement performed with restraint, and, while it drags a little in the middle, it's still a beautiful moment on the album. Breathe Again isn't as strong, through it does have a strong propulsive quality that the arrangement of I Will Follow You Into the Dark lacks.

By bookending their album with school spirit songs (as well as a little interlude in the middle), The Statesmen align themselves solidly in the classic camp of collegiate a cappella as a varsity pastime. Some listeners may find it a little corny, but the "aw shucks" enthusiasm that The Statesmen showcase on the album is incredibly infectious.

The Album is a joyful little release, and a great surprise to listen to. With a talented pool of singers and a broad musical skillset, The Statesmen have a good shot at breaking into the upper echelons of collegiate notoriety. Hopefully future albums will build on The Album's success with inventive song choices and arranging decisions, all while maintaining the group's infectious enthusiasm.

What a debut! You would never guess that the Statesmen released this album just two years after they first started singing together. Sure, The Album has a lot of the same old elements you would expect from a collegiate male debut. You might not expect to hear the caliber of musicianship and the richness of recording that normally takes generations and generations to refine. With so many established groups in the collegiate a cappella scene, it's exciting to hear a fresh batch of voices with the talent and the tenacity to start a legacy of their own.

I assume there is something in college handbooks that requires a cappella groups to take the stage with an emphatic display of school spirit. The Album pays homage to Penn State with the cinematic Lion Fanfare, the somber Penn State Alma Mater, and the rousing Hail to the Lion. Each of these is performed with all the enthusiasm of a homecoming football game and will bring a smile to the face of any alumnus. If you didn't go to PSU though, you can only hear about the greatness of the Nittany Lion so much before you start skipping through to the rest of the album.

Then you realize that the Statesmen convey as much confidence and passion in every song they sing. The soloists own their lyrics and the backgrounds provide the dynamics to match, so Higher really takes you higher and Ladies' Night really gets you strutting your stuff. I Will Follow You Into the Dark takes the cake for setting the mood. Led by Daniel Brein, the stark, dissonant arrangement instills the kind of sadness that makes time stand still and immerses listeners in the sobering magnitude of love and loss. In just nine tracks, the Statesmen prove that they are capable of a wide range of emotions and are eager to share them all with you.

For all of its virtues, The Album is still a learning experience. The Statesmen accentuate too much background diction that isn't all that flattering. The gravity of Breathe Again is lost in the looping "gan"s, "dim"s, and "shamayo"s, while the "ja da ja ja"s make Kings and Queens one of the most annoying textures contemporary a cappella has to offer. In their more climactic numbers, the Statesmen layer these riffs with words to make a rather unintelligible tonal mess. It's a tactic that almost works thanks to the careful mixing of Colin Egan but that needs to be tamed to give each countermelody its proper space.

Even if all the arrangements aren't totally up to snuff, the energy and the thoroughness the Statesmen bring to their recordings is top notch. The Album is good old-fashioned a cappella revitalized. It's the debut album most male collegiate groups released on vinyl and 8-track years ago, but with the styling and sound quality to fit right in with the collections being released today. The Album definitely got me rooting for the Statesmen's next album. And maybe, just maybe, got me rooting for the Nittany Lion, too.

I'm going to put a stake in the ground. Any music worth listening to evokes emotion, be it angry rap, elated dance beats, ethereal classical pieces, angsty alternative, or bouncy bubblegum pop. The Album, the latest release by Penn State's The Statesmen, is a fine example of evocative music. This sensitive and talented group of guys put their hearts into this album.

I only have one real complaint about this album: it's not consistent in tone. There are nine tracks. Six are from one type of album, and three are from another. Lion Fanfare, Penn State Alma Mater, and Hail to the Lion are all wonderfully executed. The pride these guys have in their school is apparent and infectious. Together, they promise an album filled with tradition and humor with a contemporary edge. I'd enjoy that album immensely.

The meat of The Album is much more substantial. Ladies' Night and It's Gonna Be Me, two songs that could work well in the traditional album described above are done with such conviction that they deserve their place among the meat. I'll call them the light meat. The dark meat is what remains and it's what makes this album so worthwhile. Not only are the performances spot on, but the arrangements ebb and flow in ways that few collegiate group are able to achieve. The Statesmen use chordial, rhythmic and syllabic complexity in varying combinations to squeeze every last drop of emotion out of each and every track. Higher maintains an uplifting feel without losing momentum while I Will Follow You Into the Dark holds you captive with its somber intensity. Breathe Again pulls on my heartstrings so strongly that even while typing this sentence, I just want to turn on this track and let it carry me away. Kings and Queens starts strong with just a single voice and builds to sound as epic as the song title implies.

I may not agree with the mix of songs, but they are placed strategically so the disconnect is minimal. The care that is put into the dark meat is equally present in the light meat. The proud marinade of tradition might just be the flavor it needs. I absolutely recommend The Album by The Statesmen to music lovers of all kinds. Well done gentlemen!