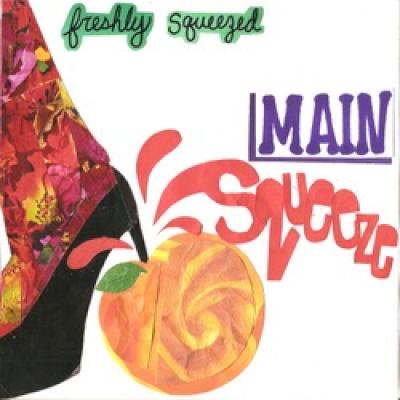 You notice pulp in a glass of orange juice. Those tart little flakes are the nuances squeezed in with the wet and the sweet that you don't get in any old juice. When a cappella has no pulp, you gulp it right down. Refined, streamlined, it's the kind of music you replay a few times, before the sugar high fades. Pulp gives you something to chew on. You go back to catch the extra touches and really get to know the arrangement, the production, and the singers. Just because you notice pulp, though, doesn't mean you're always going to like it. And as you may have guessed, Freshly Squeezed is chock full o' pulp.

From start to finish, Main Squeeze makes it clear that they're not about apples and cranberries. Throughout the album, the soloist and primary pads are almost overshadowed by the parts sailing around the periphery. Every song is rich with interjections, harmonies, and echoes that tug your ears to every corner of the arrangement. Then there are the more subtle tricks: the digital arpeggio boops in the quiet parts of Wolf and I and Cosmic Love; the celestial trickles in Settle Down; the tinging chime in the bridge of Shark in the Water. Main Squeeze is even daring enough to knock you over the head with the intricate hand percussion in Settle Down, the Imogen Heap delicateness of Baby, and the unabashedly autotuned solo of Raise Your Brokenhearted Starships. These effects, and the enthusiasm in which they are both performed and engineered, are what make Freshly Squeezed such a thirst quencher.

As you soak in the idiosyncrasies, some of the more basic elements slowly squeeze the magic out of the music. In their effort to capture every last drop from the instrumental originals, Main Squeeze overcrowded its own renditions. This comes partly from unnecessarily busy arrangements, and partly from a batch of sloppy takes. The high end of the blend is bothered by sopranos that hang out of tune, and the low end is heavy with an EQ that bluntly attacks and smothers the clarity of background lyrics. The blend is most unfortunately exposed in the diction of Baby, where the ends of words never quite come together. Complexity is great, but there's something to be said for that super-refined smooth sweetness you only get from Welch's and Minute Maid.

So how much pulp do you want in your a cappella? Instrumental radio hits have pulp a plenty that usually gets nixed for a cappella groups that are either too small or too short on time to recreate every artsy embellishment. Main Squeeze reminds us that while some of these can really add to the ambiance of a song, others just get muddled when the whole ensemble is confined to the timbre of the human voice. Freshly Squeezed is certainly zesty, but to get that delectable perfection, you just have to strain strain strain until only the finest pulp of the fruit remains.

Boy, it sure is exhausting listening to the men saturating the a cappella coming forth from my speakers. I could really go for something to cool me off and recharge my batteries. So what have we here? Freshly Squeezed, an EP from Syracuse University's all-female group, Main Squeeze? Sounds promising! I'll try that.

Freshly Squeezed is not the palate cleanser I hoped for. Fifteen years ago, this album would have been hailed as fresh and innovative from arrangements to production. Today's standards are of course much higher. Stone Cold Sober sits right in the middle of the track list and is the juiciest part of this auditory repast. Powerful solo, strong, if not a daring arrangement, beautifully mixed and with just the right amount of edge in the performances as well as the production. At the other end of the spectrum, and at opposite ends of the track list, we have Settle Down and Cosmic Love. Settle Down sounds great and is performed exquisitely but is nearly a direct transcription of the original. As an opening track, it shows nothing of the unique personality of Main Squeeze and is a poor indicator of what's to come. Cosmic Love has a nice solo and a fair arrangement, when it can be heard over the muddy distortion plaguing the lower frequencies.

Raise Your Brokenhearted Starships is a mixed bag. The title of course is great and indicative of the mash-up these punny ladies put together. The concept is cool and risky, which I respect. The execution is safe and boring; easy syllables and simple transitions. The soloists are lifeless, though the studio tricks to create the club beats is clearly a fun and playful experiment that is endearing.

It sounds like I should call the waiter back and order something else, right? Not necessarily. There are some redeeming qualities to this album. If you want fresh, the soloists on the first four tracks provide all the fresh you could ask for. The arrangements may not be groundbreaking, but they are rich and vibrant and, most importantly, appropriate to the essence of the piece. Baby is unique among the tracks as it is mostly in a choral structure which lends strength to the lyrical content. In Wolf and I, there's a moment in which the words "cry wolf cry" are accompanied only by a flowing "ooh" melody. This single section is the most powerful and sensitive moment in the entire album.

My aural taste buds feel disillusioned by the promise of Freshly Squeezed. If you are looking for dynamic and new, this isn't the album for you. If you want to hear some modern hits performed by an extremely talented group of New York gals, Main Squeeze has just served up a tall glass of goodness with condensation still beading on the side. Beware of pulp.

Freshly Squeezed from Syracuse University's Main Squeeze is a smart EP release with seven engaging tracks. The balanced arrangements and compelling song choices make this EP worth a listen.

Shark in the Water, the second track on the album, features one of the strengths of this release: thoughtful arrangements that make each voice part sound comfortable. From bass to soprano, the careful arranging leads to rounded blend and a real unity of sound. I was particularly impressed by how Main Squeeze conveyed their enthusiasm for their material through the recordings.  The energy in Stone Cold Sober especially holds up throughout the entire track. This was the track I kept coming back to as I listened to the album, as it was tightly tuned with interesting vocal percussion lines and a well-mixed balance. Despite a somewhat muddy mix, the bonus track on the EP, Cosmic Love, has a similarly compelling focus and energy throughout.

There are some significant problems with the soloists in the medley arrangement the group titled Raise Your Brokenhearted Starships. Delphi Borrich and Jesstina Allinger both have solid belts, but as soon as they are tasked with jumping into a higher register, their voices weaken significantly. It unfortunately distracts from an otherwise fun and fresh medley arrangement.

The only track that doesn't work for me wholesale was the sole ballad on the album, a cover of Baby by the Dave Matthews Band. Surrounded by only upbeat tracks, it stands out as the weakest, with coached consonants at the ends of words sticking out from the mix. The EP as a whole would have been stronger without this track.

Despite these few missteps, Main Squeeze has created an album that their many donors should feel proud to have supported. It is a solid effort and certainly worth the time for a listen or two.