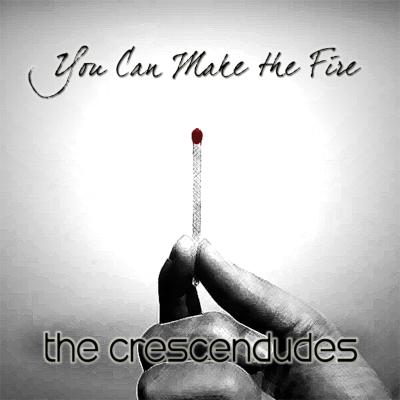 Ever look forward to a "special" day, packed with memorable moments, vistas, conversations, or meals, and when it finally arrives, it doesn't quite live up to the anticipation? The next day you walk outside, it's a beautiful spring afternoon, maybe you go sit on the porch or a park bench and just enjoy the clean, crisp fresh air, generally devoid of interruptions and irritations, and you think: what was all that fuss about, this is just fine.

The Crescendudes' You Can Make the Fire falls somewhere closer to the latter experience. The production isn't groundbreaking, the singing isn't mindblowing, and yet there's some clean, crisp, engaging music here. The sound is a bit loose, from a production standpoint, a bit more live-sounding than many contemporary albums, but in this way it also breathes life into the story these guys are trying to tell with their thematic approach. They do a nice job of transitioning seamlessly between songs, occasionally to the point where you don't realize one song has concluded and the next has begun, and if you can shut out some of the pitch and production issues, close your eyes, and open your mind, there's a curious feeling that it all works on a bigger level.

The arrangements are fairly interesting, though the group veers close to hitting maximum mashup/medley/callback territory. Luckily, the best of these, Ben Folds's Still Fighting It, features spot-on references to songs with relevant themes (Neil Young's Old Man and Harry Chapin's Cat's in the Cradle). Group member Ryan Grajo, who arranged every track but Hopeless Wanderer, has a nice sense of the various tools necessary to keep an arrangement from getting repetitive and stale. While few of his charts are particularly complex or revolutionary, they are fun and engaging. Oddly, the reinvention of Payphone, which is both complex and revolutionary, is probably the best track. The song offers a dark and breathy take that should be a home run — and would be with the kind of tight, thick production that otherwise seems unnecessary on the album. In this way, Payphone succeeds on its own terms but misses out on its extraordinary potential.

There are a few weaknesses throughout the album too. Nearly half of the solos are shaky, in terms of charisma, pitch, or both. There are also some uncomfortable moments with tuning, both the natural and the corrected tuning of the backing vocals, but few have a deleterious impact on the material.

As an overall product, You Can Make the Fire is hard to define. I haven't heard an album exactly like it and I don't know precisely what I think about it. In some ways, it brings me back to some of the better male group albums from my college days (circa '97-'01). It's less claustrophobic than the modern contenders, and there's a lively, energetic aura to the music. The arrangements have some fun references and nice shifts in style. On the other hand, it does sound a bit dated and the soloists struggle at times. I am encouraged by the use of a thematic approach, the arranging talents of Mr. Grajo, and the pure singing offered by the Crescendudes. And yet, it's just not as listenable as it should be. Here's to hoping these guys figure out how to take these successful concepts and techniques to a whole new level next time around.

The Crescendudes have something really solid in You Can Make the Fire. While the full album is less than 30 minutes, the group seems to cover a lot of ground. Though it is difficult to point out what could enhance the overall project, the Crescendudes get a lot of things right.

To start, most of the material on You Can Make the Fire gets right to the point. The tracks grab the listener's interest within the first few chords. What helps to enhance the sound is that the overall singing is relatively smooth with a tight blend in the backing group. The voices have a unified and natural sound and notes are usually spot on.

Let Me Entertain You and Hopeless Wanderer exemplify these aspects very well. Let Me Entertain You kicks things off in a very energetic fashion and the arrangement is well-crafted so voices do not have to exert themselves too much to maintain this element. What helps to add more of a win factor for this track is that it is carried well by a good soloist. Hopeless Wanderer comes from the opposite spectrum but has just as many positive traits. A strong opening, abrupt changes in the arrangement that holds interest, and well-placed harmonies in moments of silence all contribute to the success of this track.

Still Fighting It and The Gambler are also noteworthy tracks but more from an emotional perspective. On one hand, Still Fighting It exudes the right emotion through the soloists' performance coupled with a smooth and flawless flow from the backing group throughout the entire song. On the other hand, The Gambler features the best group support on the entire album mixed with well-executed chords. It is hard to choose which one is my favorite.

What it comes down to, for me, are the songs that do not necessarily match up with these previously mentioned ones. While they are not bad, they manage to fall into an area of average, nice sounding selections. Everything is produced well, but some tracks do not convince me that I ever need to revisit them again. This is why some of the tracks fall into the "3" category, because I feel that I can get the same results from any other group. Establishing a unique, one-of-a-kind sound on individual tracks is what really pushes tracks and albums to a "4."

You Can Make the Fire is actually a good listen. While all the tracks will not linger on in your head after each play, there is much in the realm of playfulness, energy, and creative arranging to warrant a listen.

You have to give it up to the Crescendudes for some pretty niche song selections on their latest entry, You Can Make the Fire. With a good range of covers from the more popular Maroon 5 and Mumford & Sons numbers to covers of Robbie Williams and Sia, this roster of songs is one of the key elements that set the 'Dudes album apart from the pack. I mean When I Grow Up by Garbage? What a throwback.

The upkeep of energy in the tracks provides major lift to the album. The Crescendudes seem to hit the ground running right off the back in their two opening numbers Let Me Entertain You and Hopeless Wanderer. Hopeless Wanderer in particular seems to stand out readily as a highlight on the album once the song begins to pick up pace around 1:40 in the track. The percussion has that pleasing pop and flavor to it and really grounds and stabilizes the song.

Payphone is an interesting take on the Maroon 5 hit, going for a darker, edgy rock sound as opposed to the original's sugary pop-ness. This Crescendudes' version isn't an instant classic but rather a slow burner that grows on you with a few replays. The added intro and outro phone call bits are creative but come off a bit on the cheesy side and could ultimately be cut out. Again, props here go to solid production on the percussion to bring out the rock tinged sound being invoked by the Crescendudes.

Playground is pretty technically sound musically but just doesn't feel anywhere as fun as the original. The soloists have good voices, but they sound a little mechanical in their interaction with the song and its lyrics. The performance lacks much of the zaniness that could bring the song to life.

The Gambler is a great closer (especially considering it ends on the same lyric as the album title). There's good balance and solidarity between the soloist and the backing vocals. Great dynamics tell the story and illustrate the mood to a "T".

As an eight-track CD, You Can Make Fire is a short and sweet entertainer. Some drop-offs in solos prevent the album from getting any true outstanding "5"s, but the sum of the Crescendudes' efforts has still yields a quality product to listen to.

Visit Loudr for a digital download or go to the group's website to snag a physical copy.