The Sons of Pitches 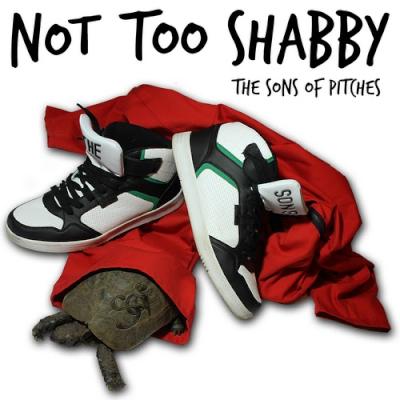 EPs by their nature are short and often a bit scattered, but the Sons of Pitches from Birmingham, UK, are all over the map on Not Too Shabby. There's a straightforward cover (Get Lucky), a creative medley (Lose Yourself), a cover-of-a-cover (Paul Anka's version of Wonderwall), and an original (You Are The One). That list itself isn't such a hodge-podge; it's the group's stylistic choices that make the EP a bit choppy: from disco/funk (Get Lucky) to jazz (Wonderwall) to hip-hop (Lose Yourself) to pop (You Are The One), the Sons of Pitches never stay in one place too long.

The style-jumping gives a good introduction to the group's interests and strengths but makes the EP disjointed to listen to. The strongest song here is the mash-up of Lose Yourself with Justin Timberlake's Cry Me a River: there's an awesome close-harmony transition at the 1:30 mark that's got a little static crackle on it to make it reminiscent of The Andrews Sisters. The song is executed flawlessly, the arrangement is creative, and I'm not sure I'll be able to hear either song without thinking of the other one again.

By comparison, the other three songs here just feel less interesting. The straightforward take on Get Lucky is well-executed, but the song is repetitive and the Sons offer little to spice it up. Similarly, Wonderwall is an unexpected cover, but most of the creativity here lies with Paul Anka, not with the Sons. The group's original song You Are The One has a cool pop-rock sound but suffers lyrically with the overuse of the word "girl", which is just filler here.

Even though Not Too Shabby is a bit jumpy stylistically, it does offer a nice sampler for the Sons of Pitches. At its most creative, the group shows great inventiveness and has a lot to offer. I hope that the group's next recording project will explore more of the moments that were the most successful here: original songs and surprising arrangements/mash-ups.

It's not everyday that you strike gold. To accomplish this feat on your first time out is even more difficult. The Sons of Pitches have done just this with Not Too Shabby. The debut EP by seven guys from Birmingham, UK features three reimagined chart topping hits and one original tune all full of infectious energy, style, and vocal effects that will leave any listener hitting the repeat button.

Not Too Shabby opens with last summer's biggest hit Get Lucky. This track is stellar because it is not just a literal transcription of the original work — the song encompasses various styles and dynamic levels throughout. The beginning is true to the natural dance vibe as each of the opening progressions are focused on quick, closed syllable sounds that hit and crescendo. The gentlemen then move through each refrain with the inclusion of various vocal effects, completely changing the feel of the song. The most unexpected element comes with the transition into the second verse that is oozing with a sort of primal energy created by the percussion and the low-end.

Lose Yourself is completely redesigned as the listener is brought in by ancient choral chanting. The lead perfectly captures the raw emotions that go into any Eminem rap verse as the constant beltones in the backing group hold a pulsing foundation. One of the coolest moments of the track comes in the first chorus as the group recreates the queuing-up sound of an old Victrola machine. Halfway through, the Sons of Pitches transition into Justin Timberlake's Cry Me A River that fuses seamlessly with Lose Yourself until dissipating at the very end.

The original composition, You Are The One, is a natural dance track. The arrangement is full of genius vocal effects that act as echoes, wah-wahs, sirens, and much more. The percussion plays a crucial role as the drumming pattern constantly evolves to add another unique layer to the song. The lead has an impressive range that aids in focusing the direction of the energy of the track. The lyrics ring true as they state "music's got us screaming for more."

The Sons of Pitches conclude the project in a big way with Paul Anka's rendition of Wonderwall (opb Oasis). The big band feel is expressed wonderfully in this version. To summarize, the entire track is playful, smooth, comical, and brilliant! What really sells the track is the great lead and his minor commentaries delivered after each phrase. The backing parts really became instruments in this track, most notable in the lifelike upright bass and the high-harmonizing horn section. This is indeed one of those moments where the small details help to push an arrangement over the top. What a fantatstic track!

If Not Too Shabby is just an EP, I cannot wait to see what the Sons of Pitches accomplish with a full album. The style, creativity, and sometimes comedic aspects that go into their music are unmatched with anything else I have heard.

In just four songs, the Sons of Pitches put on a great display of so many of the things I love about a cappella. Whether it's the unlikely and hidden mash-up of Lose Yourself and Cry Me a River, or using Paul Anka's cover to turn the cliché Wonderwall into a big band showstopper, these seven guys bring together twelve minutes of nonstop fun that has me genuinely captivated from start to finish.

I couldn't talk about this album without discussing the group's apparent love for the breakdown. In three of the four songs, the group brings it back and plays around in the arrangement for a bit, from the almost tribal vibe in Get Lucky, to the EDM-style break in You Are The One, to the band's chance to show-off in Wonderwall. All three help to show the group's diversity and range while giving the background time to shine.

I love it when groups go into the studio and utilize the tools production has to offer. I especially love it when groups can do it tastefully, like the Sons of Pitches do here. In Get Lucky, the background guitar strums in the verse go in and out, adding texture to the arrangement, and at the end utilize what I will call the "chipmunk effect" to alter the singers' voices into a super high-pitched, chipmunk-like timbre. My favorite portion of the album is in Lose Yourself when there's a held-out scratch in the first chorus to give the feeling of listening to a vinyl record, with the assistance of the altered voices of the trio singing. It gives me goosebumps every time.

After listening to the first three songs, I saw that the next track was Wonderwall, and I actually groaned, even expecting the track to start with a group member saying "Anyway, here's Wonderwall." Then the track started, and I immediately regretted even thinking I might not enjoy this track. Even though the group used an already existing cover to create its rendition, the track is fun and different and shows that the Sons of Pitches can do it all.

Overall, these four tracks are a fantastic display of all that the Sons of Pitches have to offer, and I already can't wait to see what out-of-the-box artistic ideas the group brings to the table next.

Physical copies are available at http://thesonsofpitches.bigcartel.com/.