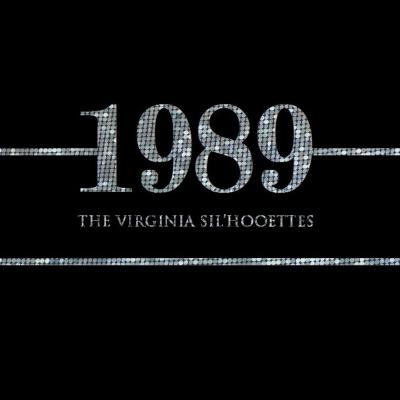 1989 was such a great year. Not only did it start my journey into this thing called contemporary (well actually, "collegiate") a cappella, but also four women at the University of Virginia got together to start one of the best female a cappella groups in the country. To celebrate that 25-year history and build upon the legacy of stellar musicianship and recording savvy, the Sil'hooettes released the pretty awesome record 1989.

But 1989 is neither a retrospective of past successes nor a simple tribute to bygone years. What it is, though, is a collection of near-signature songs by a group that understands how to build upon a quarter of a century of excellence that is firmly grounded in the present. Ballsy, brilliant, and beautiful come to mind. Several of the tracks like Breath of Life, Creep, and This Is What It Feels Like should stand the test of time.

Breath of Life is just that. The completely atmospheric approach of the production coupled with the angelic pop of the first sopranos throughout and a main melody that's like a hybrid of Enya and Ellie Goulding birthed this Florence and the Machine cover, and you understand. That happened.

Creep is one of those tracks that is deceptively hard. There has to be a touch of desperation, pathos and wild abandon hidden behind this stilted bravado and gravitas. We all know the release that is mandated by the long scream on "run" when the singer finally breaks. We get it. And the Sils get it too, and that is what they give us. All of it. Over and over again this wave hits you multiple times. In my mind I compared it to my benchmarks that are the rawness of the Acabelles' live version, and the hopelessness of Clockwork's studio version, and after the fifth listen I was finally able to breathe.

Wrapped around Creep are three songs that don't hold up to the rest of the album. Drop Dead Gorgeous is a kitschy number that was cute, then grating upon multiple listenings. Lost and Found seems just like the title states — lost in a sea of great music and unfortunately found to be lacking in comparison. Top of the World doesn't have the same emotional tug that the Dixie Chicks/Patty Griffin versions have.

And then, what will possibly be the best female track of 2014 ends 1989. This Is What It Feels Like brings it — the funk, the sass, the rhythm, the grit, the sophistication, the magic that gets into your soul and plays forever.

The reason for the "4" comes from averaging the stellar with the standard that is on the album. The arrangements sometimes support (James Gammon's This Is What It Feels Like and Alex Peterson's Creep and Breath of Life) and sometimes sink (Drop Dead Gorgeous) what could be an excellent album. The musicianship and production are great throughout. Most of the soloists shine brightly. And the storytelling arc is terrific. But those songs that fall below the special mark really mar the overall experience.

Small fault that the credits are really hidden. You have to search for the information (as we reviewers do) in order to suss that the songwriters are getting their due. Come on ladies, it's not like space was limited.

Yes, 1989 was a banner year, and the current crop of Sil'hooettes are all the better for it. Here's to their version of 1989.

The University of Virginia Sil'hooettes nail it with 1989: arrangements, performance, song selection, and soloists all hold this listener's rapt attention.

Above all else, this feels like a unified group performance. Every song but the last two was arranged by the group's music director Alex Peterson, who has held the MD role for two years in a row — a consistency which certainly contributes to the group's polished sound. The soloists here knock it out of the park, from the quartet on Wings to Emma Haberman's saucy delivery on Drop Dead Gorgeous to Grace Murphy's vocal runs on Joy. The Sils have also picked perfect songs for their alto soloists, finding songs that sit in just the right spot for those lower registers; the beginning of The One That Got Away is especially haunting, thanks to Nicole Coble's sultry lead.

My favorite track here is the gorgeous Mmm.... The arrangement is beautiful and grows in subtle ways to build dynamics, and soloist Hanna Montañez does a stunning job with the humming in the lead. But it's hard to pick favorites on an album that's this stacked. James Gammon's arrangement of This Is What It Feels Like is a dreamy way to close out the album, and Top of the World is another stunning alto solo (Reva Geier) with a rich, moving arrangement.

I'm not a huge fan of Creep here; I wish the Sils had pushed this to a darker, creepier tone, but the arrangement itself builds nicely. That's probably just a matter of personal taste, though; overall, 1989 is an engaging listen from top to bottom and is a nice example of how good an all-female group can sound.

Special thanks also go to the Sils for their thorough liner notes: all songwriters and publishing companies are credited here, as well as soloists, arrangers, percussionists, and all production/recording credits.

"When's the bridge?" I ask myself throughout 1989. It's fairly common for the bridge to be the fun part of a pop song, where the melody and chords shift gears and rev up for that last hurrah. When I've heard a song enough times, or when a bridge is particularly climactic, that urge to fast-forward through the second chorus is just me being impatient. When I get that urge for all eleven songs on an album, there's something less-than-enchanting going on in the music.

There are some very similar, and not very captivating, arranging elements that comprise the bulk of 1989. The polyrhythmic sound of transcribing backgrounds directly from the instruments in original tracks. The attempt to imitate those instruments with the harsh transients of "jin", "joh", and "jah". The syllables clumped into predicable patterns that spell out the chord changes (often shared among voice parts, but always prominent in the bass line) so that it feels like you are marching atop beats rather than flowing through them. It's a challenge for the Sil'hooettes to narrate much emotional development with such curt, repetitive measures. So you tap your toes and wait for the bridge.

What you get in the bridge is about the same, but with more bells and whistles. The percussion on 1989 is extremely reverberant and unrealistically sampled to begin with, but the Sil'hooettes and producer James Gammon throw in more hits and more volume to give the bridge some oomph. This is most effective in Creep and This Is What It Feels Like. Gammon's other trick is to put the soloist in a new space. The delay and reverb are fantastic on The One That Got Away, Top of the World, and My Songs Know What You Did in the Dark. The telephone EQ on Drop Dead Gorgeous and "instrumentals" on the other tracks unfortunately don't make the bridge something worth waiting for.

The bridge should not make or break a song. With so many extraordinary reviews over the past decade, it's surprising to hear the Virginia Sil'hooettes sound so ordinary. This album shows a lack of passion and innovation in a genre that has been supercharged with new ideas and opportunities since the dawn of YouTube. You can hear it in the unenthusiastic backgrounds and the impersonal solos. The Sil'hooettes have an impressive legacy, and they have recorded a few rock-star moments, but that might not be enough to get you through to the bridge on 1989.

1989 is available on iTunes, CD Baby, Amazon, Spotify, and several other music distribution sites. More information about the group and album can be found at www.silhooettes.com.