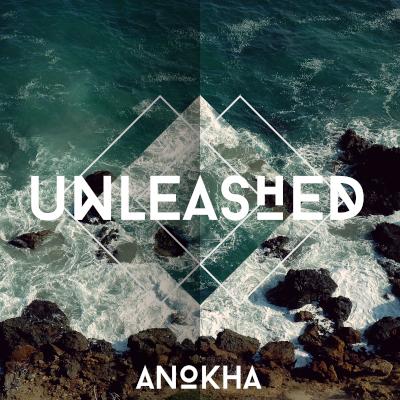 What Anokha unleashes in Unleashed isn't very clear. There are a lot of ideas and a lot of voices and a lot of post-production effects, and they are all mushed together into something quite difficult to decipher. This is Anokha's first full-length album and, as with many groups new to the recording scene, they haven't yet figured out how to channel the energy of performances to come across clearly in headphones. There are a few techniques they employ that might work wonders on stage, but only muddle the sound in Unleashed.

Mash-ups can make an arrangement unnecessarily cluttered and hard to follow. Anokha managed to squeeze in eleven (and maybe more unlisted) songs on a seven-track album. It's a nice way for Anokha to share its South Asian heritage with a widely English-speaking audience, and in performance, mash-ups are usually a surefire way to get the crowd going. But alternating between songs stifles the momentum you could get from arranging each separately, and overlapping them forces your ears to choose between two clashing melodies.

Percussion can take up a lot of space. In a past review I introduced the idea of Pavlovian percussing — the habit of some vocal percussionists to slobber impulsively at the microphone with an overzealous array of sounds and rhythms. I'm sure there was thought put into the percussion parts on Unleashed, but I do wonder why there are three different snares in Dil Se/Madness, and why one of them is almost indistinguishable from the kick. Emphatic percussing is exciting on stage, but much more effective when you only accent the beats and rhythms that need it most.

Using filters subtly or sparingly is stylish; using them constantly is not. Distortion and phasing cover up tuning and timing issues, but used in excess, these effects make blending issues of their own. Hurt is the only song that uses filters appropriately, and stands out like a sore thumb because of it. Too many filters, and too many layers of parts, convert the background from harmonious syllables to an incomprehensible wall of sound.

Fortunately, highlighting soloists is just as good an idea in a recording as it is in performance. The intro to Teri Deewani is a masterpiece of South Asian riffing and inflection. The reverb perfectly accentuates the climactic "love" of Madness. The pitch correction is calibrated just so to put an edge on Blood on the Leaves/Jiya Re. Dividing the solo amongst a trio in Hurt makes for a beautiful dialogue and a real sense of closure in the final chorus.

Though the backgrounds could stand to be clearer, they drive Unleashed forward with more than enough energy to support the leads. Even if you're not entirely sold, Anokha is giving this album away for free. So why not pick up a digital copy for yourself and broaden your musical horizons today!

I've actually performed in not one, but two Hindi-English a cappella groups before. I hold a special place in my heart for this particular genre. Unleashed by Anokha definitely makes me feel nostalgic. It also makes me shake my head in disappointment. Unleashed is a strange mix of pristine and muddy.

Love Me Again is a promising start to the album. While I want more meat to the bass and the kick drum, the arrangement is solid and the energy is right on target. This song primes you for a fun listening experience.

Dil Se/Madness shifts gears into more of a fluffy, happy sound. Once I realized this was intentional, it became quite enjoyable. Keeping the chord structure of Dil Se during the Madness sections is a nice touch. However, I find myself missing even a hint of the edge of what makes Madness so iconic. This track gives hints to the prevalent issues on the album.

Teri Deewani stagnates from the beginning. Two chords dominate this song, and with block chords and pitch correction this track has very little to lend it interest beyond attempts at altered rhythms in the backgrounds.

Hurt makes me perk up with a fresh choral sound followed by some nice dissonance. It quickly loses me when the baritone lead sings low notes that are not in a usable range for the singer. Pitch correction just amplifies this and makes Hurt nearly painful to listen to. By the end of the song, the blend is muddied due to auto-tune.

The Scientist/Iktara starts off beautifully with a nice bell tone effect. Then it gets complicated almost immediately with the chorus of both songs overlapping. However, it reverts back to a simple state with lots of open space, which brings it right back in the game. This is a track the fits the promise that Love Me Again made. Block chords and autotune once again create a muddy sound at times, but the arrangement is vibrant enough to make the effect negligible.

Radioactive/Too Close is a fun mash-up with two well-matched songs. Anokha is not an edgy enough group to really pull it off, but I can respect the effort. The engineer did a great job on the mix for this one as well.

Blood on the Leaves closes out the album in a really interesting way. A jazzy voice combined with T-Pain style auto-tune, a legit R&B feel, and a sick rap solo make this a breath of fresh air to the mediocrity the saturates the center of this album.

I encourage Anokha to take a close look at what type of group it wants to be. The tracks that really shine have a darker edge to them; Bollywood doesn't tend to have much in that vain. The reason those tracks are so effective, though, has nothing to do with them being in a major or minor key — it's the way the arrangements play with what was given in unique ways. Mixing pop with Bollywood can only work so far as a novelty. Make the songs your own and show why these two styles are actually perfectly matched for each other. I want to see someone make the Hindi-English art form something special that no one has seen before. Perhaps that someone could be Anokha.

Unleashed is the debut album from University of Maryland's South Asian fusion group, Anokha, and it's a strong start for the group. As someone who's a lot less familiar with South Asian and Bollywood music, I enjoyed this album immensely. Anokha has a smooth, rich sound, and they're able to convey the emotions of the songs so easily regardless of the language barriers.

One thing Anokha seems to have in spades is knockout soloists. If you're looking for some flawless leads, don't skip over this album. Mihir Patel has a voice like warm honey in both Dil Se/Madness and Teri Deewani, and Sara Mahmood and Alexander Goniprow sound absolutely beautiful together in The Scientist/Iktara. Also, if you're into riffs, the tail end of Teri Deewani will not disappoint. Many of the group members have years of classical training, and it shows in the strength and intensity of their solos.

The strength and talent of this roster is also why I think some of the group's weaker numbers should be easily avoidable as the group moves forward. Hurt is a little out of place on this album; the style doesn't fit with the rest of the tracks, and the more choral backgrounds make the group suddenly stiff and slightly disjointed. Something about the arrangement just doesn't click for me. Similarly, in Radioactive/Too Close, the two songs should work together, but the track never seems to lock into a groove. There are parts where the intensity of the lead doesn't seem to fit with the background, and overall I wish the solos were less produced.

The overly-tuned, heavily-produced style works much better in Blood on the Leaves/Jiya Re, the final number on the album, which I think is the most interesting track on Unleashed. Having looked up translations of all the songs on the album, I was a little surprised at how upbeat the original Bollywood piece is, especially compared to how haunting the repeated chorus becomes in the mashup. It's a powerful track, especially in light of recent events; the Kanye West hit samples Nina Simone's Strange Fruit, a song based on a poem about lynchings in the 1930's south. Here, unlike in Hurt, the arrangement feels organic, and there's a cohesive emotional space for the group.

Creating those spaces should be the main focus for Anokha, since that's where the group really shines. There's no need for singers of this level to sound as out of place as they do in some of these tracks. I encourage them to approach each song with intention, and focus on what they want to convey instead of things like perfectly matched enunciation or over-thought arrangements. As long as you make your music resonate with your listeners, it doesn't matter what language you're singing in.

Unleashed is available as a free download from Gumroad.