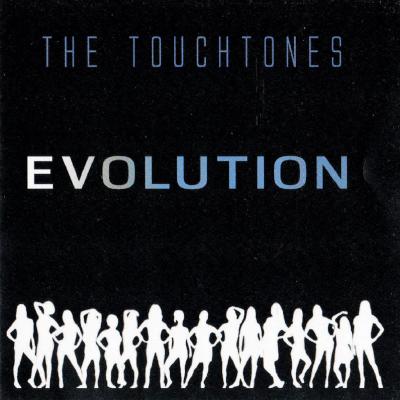 For the first eight or so minutes of their new EP, Evolution, the Touchtones of Cornell University have something special going on. Radioactive begins with swirling voices, adds a buzzy bassline, and then a slide into the verse, where the crisp and punchy drums enter. Breathy space is emphasized by a sharp "ch.....ah" halfway through that verse. Verse two adds some lip buzz (or a reasonable facsimile), along with some fuzzy electronic sounds, and offers nice growth from the first verse. When the breakdown hits with some harmonic gambles, and a successful modulation follows, the track becomes one of the better collegiate tracks released in 2014, thanks in no small part to the intuitive and thoughtful production choices by Mike Jankowski of A Cappella Productions. And then ... fizzle. The group just couldn't quite figure out a way to extend the creativity into an exciting or interesting ending. Luckily, track number two quickly follows, bringing with it some new and different joys.

The moody, sultry interpretation of John Legend's Made to Love, fronted by the talented Taylor Barnes, is enticing. Jennifer Darroch's arrangement creates a dark, thick atmosphere which is punctuated by swaying timpanis and other drums, along with steady handclaps that give the song a driving momentum. Every thirty seconds or so brings a new addition to the layers, and this is precisely the kind of progress which elevates a simple pop cover into something worth listening to repeatedly.

Unfortunately, the remaining three tracks on Evolution don't hit the same marks. It may be a coincidence that the songs were not arranged by music director Darroch, who also masterfully handled Radioactive, but I doubt it. Royals has some nice moments, but it doesn't improve on the original in any way. It is clean-sounding and has decent momentum, but it ultimately sags. The cover of Bruno Mars' Runaway Baby takes an even bigger step back, feeling punchless and unexciting. Luckily, the group's version of Macklemore and Ryan Lewis's Wings recovers some of the energy and guts to finish the EP on a positive note.

Consistency is always the toughest part of putting together a top-notch album or EP. The ladies of the Touchtones have some interesting ideas about how to turn covers of well-worn pop music into compelling and engaging music. Darroch's instincts and vision are promising, and when the group brings a sense of commitment to the singing, the Touchtones offer music worth a listener's time and money. Their next goal should be finding a way to extend that vision and commitment to each and every track.

The fun-sized Evolution by the Touchtones isn't a game-changer, but does have an attractive track listing that should please pop fanatics.

The Touchtones' Radioactive sounds nice enough, but feels a little underwhelming at the same time. The cover lacks the grit, dirt, and angst that marks the song's identity. This is especially important considering the arrangement approach is more or less a direct translation from electronic to voice, and most listeners' ears will likely still be primed for it.

Made to Love is by far the real gem of Evolution. The solo is superb; it emotes, it interprets, and it takes ownership. I really like the decision to slow the song and embellish its more dramatic moments. The effects over the percussion add a lot of mystery and a sense of depth to the track, and the whispery dynamic of the background is a great contrast to the bolder lead vocals. The group dynamics really establish a terrific sense of journey from start to finish.

Royals feels very much like Radioactive. There isn't anything truly wrong with it, but there isn't a ton of ownership taken with the song to keep the listener's interest for too long.

Wings is actually a lot of fun. The rapping sounds quite natural, and the soloist has a great grasp of the Macklemore flow and a vocal quality that adds a different character to the narrative.

In all, the sampler size of Evolution isn't quite a total wower, but leaves listerners with an impression of room to grow in the future.

Evolution is the newest release from Cornell's all-female a cappella group, the Touchtones. While the album's title suggests progress through adaptability over time, it is unfortnately a misnomer, as the music itself reads similarly to their previous releases in its untapped, underdeveloped potential.

I must credit A Cappella Productions for their editing and mixing work on this album. The album is not displeasing to the ear, and the effects used do not overwhelmingly augment the music to make it sound false. What they do especially well is create intrigue in tracks like Radioactive, where it sounds as if both the soloist and background singers are often lacking in intensity. If the Touchtones were opting to go in a different emotional direction from the Imagine Dragons original, their choice was not clear; therefore, the tune comes off as reserved. While the studio was able to set the stage for Made to Love well, some of the more rhythmic syllables lack the percussiveness to continue the mood through verses.

While Royals and Wings come off similarly to Radioactive in their lack of originality and energy, the album was not devoid of innovation, as the Touchtones included a new take on Runaway Baby by Bruno Mars. While I applaud the group on their attempt at a new rendition, the reasoning for their choices were unclear, rendering them ineffective. The syllables are so transparent from the top that they steal focus. To slow the tempo of a song like Runaway Baby seems like an odd choice, as the first lyrics of the chorus are "run, run, run away," and at this tempo, it reads as more of a light jog. While I appreciate the reference to Dog Days Are Over, "run fast for your mother..." is clever but also does not read in this tempo.

The soloists do an excellent job of singing the notes and rhythms accurately. However, one of the most glaring omissions across the board in this EP is the emotion required to tell a story through vocal music. The soloists tend to be one-dimensional throughout each track and don't take advantage of the potential to color specific phrases and sections differently or take a journey from beginning to end. The potential is certainly there, as most of the voices are pleasing to listen to, but they don't advance past the foundation level to create something that transcends the page.

My hope is that the Touchtones continue their evolution and attempt more thoughtful, innovative covers infused with as much human emotion as they can muster.