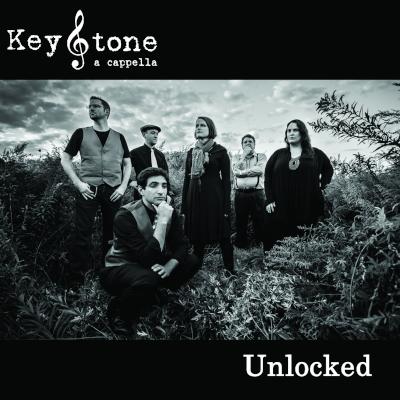 KeyStone A Cappella was founded in 2011 as part of CASA's Contemporary A Cappella League (CAL) program, designed to give post-collegiate a cappella singers an opportunity to sing regularly in a group without the commitment (and in some cases, skill level) that would likely be demanded by a full-time gig with a professional group. While I think it's fair to call it recreational a cappella, not unlike the kickball league you might play in after work, it also can be quite competitive. And perhaps more importantly, it has yielded some excellent ensembles creating solid music that has been showcased at multiple a cappella festivals over the last few years.

Seen through this prism and based on the group's album, Unlocked, KeyStone is a promising six-person ensemble, featuring talented vocalists who clearly enjoy singing together and who render a cappella covers which, for the most part, might best be described as pleasant and inoffensive. They are not powerhouse singers, nor are most of their arrangements likely to wow you with their complexity or inventiveness. It's a far cry from amateurish, but it's still a few steps down from better CAL groups like Restated or Redline (at least since last I heard those groups, which admittedly was over a year ago).

What is slightly more difficult to reconcile is the KeyStone mission statement on the group's website, which asserts that they "strive to present innovative, original arrangements of pop and rock music both familiar and obscure." Seen through that prism, an assessment of the group as heard on this album cannot be quite so generous. Yes, technically, these are original arrangements, but save for a few exceptions there is very little here that could be called either innovative or obscure. What Unlocked does feature are quite a few musical miscalculations both on the part of the group and by the production team at The Vocal Company that put the album together.

Working backwards, there is a slavish sameness to the mic-ing, mixing, effects and general production quality of every track. That might be the envy of a group that was specifically seeking a homogenous sound, but the repertoire covered here ranges from Mumford & Sons and Regina Spektor to Whitney Houston and Christina Aguilera. Surely there is a different production palette demanded by these different artists? Or if the group insisted upon filtering all of this wildly different music identically, then the error is theirs. Either way, the dominant tendency towards a very "wet", full, forward, precisely edited sound tends to serve the songs of Whitney and Christina and less so the others.

The other major issues here are the general simplicity of the arrangements and an overall sameness of sound, neither of which is helped by the overwhelming reliance on the two female singers. When the group does in fact take a wholly original and somewhat innovative approach to a song — reimagining 25 or 6 to 4 as a moody slow jam, or restructuring In Your Eyes in 7/8 to develop a multitude of rhythmic and harmonic pallettes to experiement with — the results can be quite exciting. But the vast majority of the time, we get homophonous and/or very simplistic backgrounds (rhythmically and harmonically) that are frustratingly straightforward and obvious. Add to that soloists (female and male) whose voices sound a bit too "legit" for some of the quirkier material covered here and whose upper registers tend toward the slightly pinched/nasal and slightly shrill quality, and the cumulative effect can be a bit grating after a few songs.

As noted, there is definitely a lot to build on here. The moments of inspiration are fleeting but important and thrilling nevertheless. Friends, family and fans of the group will surely enjoy this CD as it is, but if the group can dig deeper into that well of sophistication and imagination to interpret more material unexpectedly and innovatively, its fanbase will surely increase many fold.

For a long time, post-collegiate American a cappella generally fell into two broad categories. The first featured driven professionals who worked tirelessly, constantly honing their skills. The second was often populated by people who wanted to have fun, maybe get together and sing without all that much commitment. With its album Unlocked, mixed contemporary vocal group KeyStone shows just how far the a cappella community has come in bridging the gap between those categories. The Contemporary A Cappella League group from Philadelphia has put together an album with thoughtful arrangements, invested solos, and detailed production. That it doesn't garner many "excellent" scores does not in any way diminish the accomplishments that KeyStone has achieved with this album.

Starting at the global level, Unlocked is an album with several consistent traits. The songs generally fit into two categories: peppy, mid-tempo tunes like I Choose You or Rhythm of Love and moody, gloomy mid-tempo tunes like Beautiful or the terrific reinvention of Chicago's 25 or 6 to 4. The arranging, mostly credited to group member Amy Howe, is often relatively simple but smart and effective. The structural influences range from doo wop to something more progressive, but always in service of the song and well chosen to suit the group's abilities. Ted Trembinski and Dave Longo from The Vocal Company have taken these canvasses and created a uniformly dark sound which can be warm at times, and perhaps a bit claustrophobic at others. They do a consistently great job of highlighting noteworthy or meaningful moments in each song.

Solos are often invested, engaged, and considered. These traits are especially prevalent with Jennifer Steinberg's smooth efforts on This is War and playful, charming touches on I Choose You, as well as Howe's haunting take on 25 or 6 to 4. The backs are not quite as praiseworthy. At times, voices seem lethargic or disengaged even if they are technically singing the right parts, and they can get a little broad or shouty. Luckily, the arrangements, production, and solos do a nice job of compensating, only occasionally leaving weaker spots exposed.

A few other standout moments include the aforementioned treatment of 25 or 6 to 4, the street-corner introduction to Sara Bareilles's Brave, the rhythmic variations and energetic singing of In Your Eyes, and the sweet, tender, lush beginning of the album opener, Below My Feet. In fact, if KeyStone had recreated more of those moments, I might well have given them some "excellent" scores.

In the end, the group has certainly unlocked something valuable. The group has solid arrangers and soloists, a sturdy rhythm section, and a good sense of its own identity. Unlocked is an album which reveals these strengths, along with a few weaknesses. Luckily, the latter are the variety which can be remedied in future productions.

Two things I noticed very quickly about KeyStone while listening to Unlocked: its biggest strength and its biggest weakness. When the group tackles ballads, such as the beginning of Below My Feet or Beautiful, there is a complete sound that is rich in flavor and texture. When the group goes for more upbeat tracks, the final result is simply missing something, both literally and emotionally.

There is a very stark contrast between the two types of tracks on the album. The arrangements are either complex and engaging, or they are akin to a cappella of old with the bare minimum in syllable usage and an empty sound. My favorite example of the positive is 25 or 6 To 4, originally an upbeat and high energy rock song which has been changed into a beautiful ballad with peaks and valleys and having so much depth in a song originally somewhat one dimensional.

There is a trend of converting faster songs into slower ballads, even if for a verse and chorus, throughout the album. It starts with Below My Feet and is used again on 25 or 6 To 4 and Brave. These are some of my favorite moments of the album, because they show off this group's ingenuity more than anywhere else. Listening to these parts, you hear the intricacies in the arrangements, from dissonant chords to tricky rhythms, and you just know this is a special group.

However, my biggest disappointment is the fact that some songs clearly didn't get the same attention and energy as others. Fidelity and I Choose You, for example, are very simplistic and unexciting. They interrupt the flow of the album when I am ready to hear it take off. Now the group needs to rebuild my confidence after damaging my initial reaction. A 12-song album is really great, but some of the songs just don't meet the others in terms of quality and care, and KeyStone may have been better off simply leaving off those songs.

But, never wanting to end of a negative, both KeyStone and I have saved the best for last: In the Gloaming. This track, I don't even know where to begin to speak its praises. Surprisingly, the old English love song is performed by only two members of this 6-member ensemble. Amy Howe and Jennifer Steinberg blow me away each and every time I listen to this track. It isn't much, mostly the two of them harmonizing, but its simplicity is its beauty, and I continue to be captivated by what they've created with the last track on the album.

This is only KeyStone's first album, so it will be very exciting to see how the group grows from here.