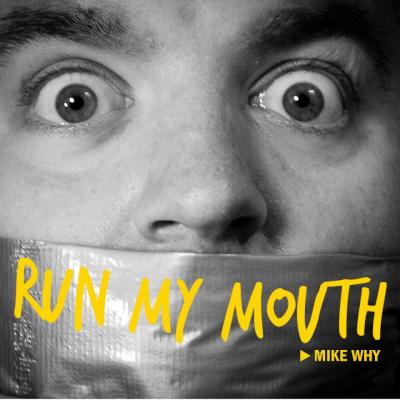 Is there a standardized name for an a cappella recording where all the parts are sung by the same individual? Run My Mouth is such an album, a six-track EP solo effort by Mike Why. He sings all parts on all the songs, with the exception of the final track which contains a section featuring rapper Billy Pilgrim (not to be confused with the '90s folk rock duo by the same name). My quick take is that it's a very good album, with a little more hip-hop feel than would be ideal for my own personal taste, but which many will enjoy.

Mike is clearly a talented singer and musician. His a cappella arrangements are generally well done, with many layers of sound to capture and keep one's attention. Many of the tracks contain interesting additions such as whistling, trumpets, kazoo-type sounds, and so forth. There is a feeling of coolness and easiness that permeates the album that is difficult to describe. His voice is very good, but I wouldn't call it great. By that I mean that while there are several "make me take notice" moments in the arranging and production, there are not really any as far as the lead vocals go. He has a deeper voice than, say, noted solo a cappella-ist (there, I just invented a new term!) Peter Hollens, and the mix is quite heavy on the bass, on top of the already bass-heavy starting point. The overall result is, well, bass heavy. That's my main production complaint.

I didn't look up the details of the songs until after I had already listened to the album several times and decided on my rankings. It was therefore interesting to me to find out that the three songs I had rated the highest, Set Me Free and the two versions of Say What Ya Say (Blah Blah Blah), were originals. Say What Ya Say (Blah Blah Blah) in particular is a great song with catchy rhythms and melody, and got stuck in my head for lengthy periods of time as I was listening to the album for this review. Set Me Free is also quite interesting, with many sections of triple echoes of "oh"s. The other three songs are covers: Seven Nation Army (opb The White Stripes), Animal (opb Neon Trees), and Gold Digger (opb Kanye West). These tracks are a little weaker than the originals. In the case of Animal, the only song of these three that I had known previously, the arrangement is interesting, with a slower take on the song, and with jazz rhythms and an almost reggae feel in places. However, although "interesting" usually means "good" in my a cappella reviews, I actually find the musical style a little off-putting given the urgency inherent in the lyrics.

So, overall the album is a good listen and I give it my recommendation, especially for those who appreciate a cappella hip hop music.

Here at RARB, we often lament the proliferation of carbon-copy covers of popular songs. Thank goodness for Mike Why and his relentless creativity.

I had to double-check the track title for Seven Nation Army; Why's arrangement and performance renders this oft-covered White Stripes tune nearly unrecognizable in the best possible way. The tempo is sped up, and the feel is more hip-hop than rock, but that description fails to capture exactly what's going on here. Why's vocal percussion and guitar chops are on full display here, as is his soulful baritone lead. The interpolation of Alex Clare's Too Close might make some cringe, but I love the way he integrates that song's theme into the arrangement as a secondary motif. And before you roll your eyes at yet another Animal, just give it a listen — it's the reggae version that you never knew you always wanted, so brilliant and yet so obvious in retrospect.

Why's originals aren't bad either. Say What Ya Say (Blah Blah Blah) is the stronger of the two. It's got a great hook, a great beat, a great arrangement, and lots of cool vocal instruments (trumpet and Hammond organ stand out; is there anything this guy can't do?). And for those that think what this song really needs is a spoken word interlude, as I did on my first listen, I direct you to the "extended cut" and rapper Billy Pilgrim's prime example of the art. Set Me Free, on the other hand, is composed of layers of Eastern-influenced sounds and rhythms meandering around a single chord. It's very cool, and it probably blows the audience away in Why's live-looping performances, but on this EP it feels about a minute too long.

Why has also found a wonderful collaborator in Andrew Lefkowits, who knows just where to put all of those crazy sounds in the mix. Lefkowits's name is not one I've seen before, but groups in the Pittsburgh area would do well to give him a call for their next project.

As a cappella debuts go, Run My Mouth is about as good as it gets. Here's hoping others are listening, because we desperately need more artists, real artists, like Mike Why.

Run My Mouth is the debut EP from solo artist/live looper Mike Why. Listening to solo recordings is a different experience in a lot of ways from listening to a group, and some of the categories that we, as reviewers, judge take on a very different feel. With a group, getting the right blend can be tricky when multiple people and voices need to match timber and style for chords to really lock in. With solo artists, there's more of a need for variety; the danger is not that backgrounds won't mesh together, but rather that there won't be enough difference to create a full sound. That is an area where Mike Why definitely does not fall short, and I want to give credit both to him as a performer for having such an expansive repertoire of sounds he can produce, and also to Andrew Lefkowits who mixed the album.

Mike Why advertises himself as a "One Man Band... Without the Band", and it's not an empty claim. Throughout Run My Mouth he fills the roles of singer, drums, bass, backs, brass, guitars, and a plethora of other fun inventive sounds (his site lists "vocal lightsaber" as one of the options). Sadly, despite the amount of tricks he has up his sleeves, many of the tracks get stale too quickly. Seven Nation Army, the album's opening number, was the most egregious to me, as the intro drumbeat remains unchanged for the next four minutes. I imagine it works great in a live looping show, but in a recorded setting it quickly becomes a little grating. It also set the tone for how I listened to the rest of the album, which made the repetitive nature of most of the tracks stand out that much more.

The songs that fare better are ones that introduce variety not only in the sounds being made, but in the arrangements as well. Animal, for example, is not only a clever take on the Neon Trees song, but also features an arrangement that evolves more as the song progresses. Gold Digger has its own moments that keep me interested and is helped by the fact that rap lends itself more easily to a repetitive style.

My advice to Mike Why for future recordings would be to focus on how he approaches arrangements. It feels like the novelty of having the studio setting and not needing to build each track layer by layer led him to show his hand too early or not allow songs to grow and develop throughout. Also, without the looping board, there's no need to be constrained to the same chord progression over and over again. Arrangements can tell a story, but stories need to at least have a distinct beginning, middle, and end; otherwise, tracks end up stuck in a rut.

CDs and merchandise are available for sale at mikewhy.bandcamp.com. This album is also available for download at Big Pond, Deezer, EMusic, SongKro, Zia, and more.