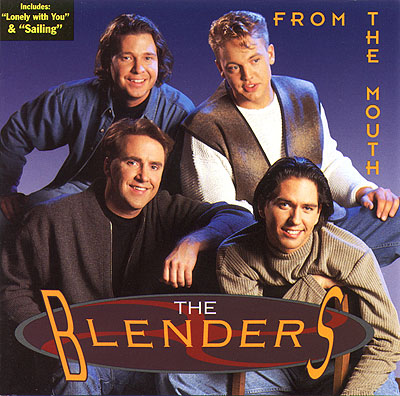 The opening track of From the Mouth, a spoken work bit in which slimy agent character is mocked for not knowing about a cappella, is pure arrogance. Forget the fact that not being familiar with a cappella (or the correct pronunciation thereof) isn't a crime and certainly doesn't make one un-hip. The real problem is that The Blenders, looking down there noses all the while, proudly announce that they're all vocal. Why on earth would anyone make a promise like that on track 1 when that promise will be broken by a tambourine on track 2? There's nothing inherently wrong with using a tambourine (or congas, or a shaker, or even the acoustic guitar that they use as a percussion instrument). Fine. Whatever. But don't go bragging about being "all vocal". Sheesh.

Moving onto the music: Dang, this is a swell album. The arrangements are lively, the energetic performances are both playful and tightly controlled at the same time, the production nicely textured. And, most importantly, the songwriting is great! A lot of the songs are meant to be funny, but once the joke has worn thin, the songs still work as fun pop music. That's nothing to sneeze at. A lot of the time they're clearly trying to be clever and, brace yourselves, the lyrics actually come out sounding clever! A lot of groups try to sound clever and sound like they're TRYING to sound clever. None of the lyrics here sound forced. Everything fits perfectly with accessible little melodies.

Stand-out songs include Tasty, Tasty, Tasty (which features a ton of guest vocals on it's big finale) and Plainotfancy, a tribute to all the girl-next-door types out there, and Lonely With You, a ballad that swerves way off the beaten path. Summer Sounds, an ode to idealized summers in suburbia, may sound cheesy, but so is summer in suburbia. Give in to the song's simple charms and it'll make you feel all backyard-barbaquey inside. Speaking of summer, every summer camp in America should be required by law to sing the wonderfully silly Aunt Sue's Ant Soup twice daily. As for the covers, there's not one damn thing you can do to keep 60 Minute Man from sounding tired. On the other hand, you have to hand it to them for their cover of Don't Worry, Be Happy. Normally there's no reason to cover a song that was a cappella to begin with or to cover a comedy bit. The Blenders subvert both problems with their radically different interpretation.

It has often been said that The Blenders are true to their name, excelling at blend and harmony. Such a statement is especially appropriate on this album, where these four North Dakotans have tied their wonderful blending abilities to a degree of studio sophistication lacking on their first album: the blend sounds better because the mix is so much better, and the judicious use of studio effects (e.g. some shimmer on Sailing) only adds to this.

Consisting mostly of originals, this album gives the guys a chance to show off their skills . . . and for the most part they succeed. Some of the songs are less effective than others, especially where matching lyrics to the rhythm is concerned; at times the lead seems to struggle to get the words out in time. The melodic lines themselves are normally convincing (Summer Sounds), but sometimes sound contrived, almost too jingle-like (Tasty...). All in all, a nice showing of originals.

I recommend this album for anyone interested in hearing how good a cappella can sound even without percussion, serious studio effects and the like. The Blenders aim for tight, lush harmony, and succeed very well.

I had heard of The Blenders before, but had never heard their music.

The thing that makes this album so awesome is not only its impeccable tuning, blend, energy, and really great originals. It's that The Blenders have this crazy, zany sense of humor. They hint at it with their intro, where a smarmy agent calls the group with this crazy idea of doing their album Oxapello. Then they start off the music with a song entitled, Tasty, Tasty, Tasty. But the true highlight comes in the thirteenth track, when The Blenders do a whacked-out, twangin' country version of Bobby McFerrin's Don't Worry, Be Happy, warning the live audience, "If you've hated us so far, you're really gonna hate us after this!" My, oh my oh my. After rolling out of my chair in hysterical laughter, I have to say that I don't think I've ever heard a cappella comedy done this well.

Otherwise, the album features amazing production quality — the engineering and mixing are all top-notch (The Blenders arranged, performed, produced, and engineered all of their songs themselves). Every song sounds full, deep, and super crisp and clear. Ten Blenders originals grace this album, most of them so catchy and fun to listen to it's depressing. My favorite, Lonely With You, is a beautiful love ballad (oh yes, I'm a sucker for those) that features the smooth crooning of Darren Rust. Love that.

Anyway, big props to The Blenders on a truly entertaining album. For anyone following my cringe factor test that I've been doing on many of the albums I've reviewed, I did not cringe a single time in this album. In fact, it seems ludicrous for me to even think that I could at From the Mouth! Go and get this good stuff.

What a great sound! What a tight blend!! What an old album!!! The Blenders could be one of the tightest, purest sounding groups I know of, but still I had a difficult time with rating this album. How do I review this album six years after its release? As you may know, contemporary a cappella has evolved quite a bit since 1993. I'd find it very difficult to name any pop/rock groups nowadays who only have four members and really do no vocal percussion (they use tambourines though, hmmm). Their sound is wonderful but if this album were released today it would sound behind the times for sure (compared to m-pact, FOCS, or spiralmouth).

Reviewing troubles aside, these guys can really sing. I cannot find a single pitch or rhythmic nuance which is not perfect on the entire album. The individual voices are great, although I am definitely not a fan of Tim Kasper's solos. His voice sounds a little too Kermit-The-Froggy for me. I much prefer the other soloists, including the bass on 60 Minute Man.

I absolutely detest Tracks #1 and #12. They are just filler tracks thrown in to be funny or cute and it just sounds stupid. Maybe it worked in 1994 but nowadays it's just useless. I do, however, love the live track of their country version of Don't Worry, Be Happy. Very funny.

The sound production quality is top notch. They have a very bright sound the whole way through, with a nice touch of bottom end thrown in (not too boomy, but present). Overall it's a very well done album. I highly recommend it for your a cappella library.

I'm going to keep this really simple; no rant needed. Put simply, this disc is great. It is everything a great a cappella CD should be with icing on top. It is energy, character, and humor bottled, burned, and shipped straight to your ear. Plus, you don't need a master's in music to appreciate the amazing nature of this album. It is chocked full of catchy pop tunes with the occasional dose of humor mixed in.

The production quality is top notch. The background vocals are where they should be, out in front of the mix. They are not buried behind layers of effects and fluff. The arrangements are extremely innovative and effective. But the most amazing quality of this album is it's staying power. From the Mouth was released in 1993, making it many years ahead of it's time.

However, as is the case with every CD, there are a few minor deficiencies. The lead vocal on each track is consistently behind the mix. I love the fact that the background vocals are out front, but I'd like to be able to hear the solo without trying. There were several times I found myself repeating a section just so I could hear the lyrics.

Other than that, I'm all for recommending this disc for consumer consumption. Tracks like The Girl is Good and Summer Sounds will send you clamoring for other Blenders material. This is one of the reasons The Blenders are a household name in the world of a cappella.