Best of The Harmony Sweepstakes (1999) 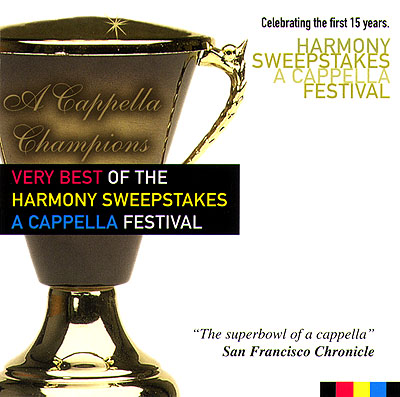 It's Welles, you see, who compiled the excellent compilation of Harmony Sweepstakes cuts that has recently hit the market. Mark this down, ladies and gentlemen — John Neal hired someone with good taste and let them do their thing. Now John Neal has hired Welles, a mild-mannered radio host, and together they have produced a lovely compendium of some of a cappella's final moments between 1993 and 1998.

All of the winners are here, but so are many of the honorable mentions. The song order is based on merit and listenability, cushioning listeners on a seamless flow from funky jazz to traditional jazz to soul, then into contemporary pop and barbershop. I could have done without the Trenchcoats' rusty Rawhide or Boyz Nite Out's whitebread Wild Wild West, but they are thoughtfully tacked on at the end for easy circumvention.

SoVoSó's Say a Prayer is a glorious exclamation, far and away the most compelling cut on the album. Many of the obvious hits are here, too — the Accidentals' You Win, stripped down to live guts and only seven singers, and m-pact's oft-cited Change in My Life (now on at least its fifth compilation appearance). But there are some gems I'd forgotten about as well, first among them Beachfront Property's quirky Straighten Up and Fly Right.

Rarely have I listened to a disc that maneuvered so smoothly amid so much breadth. I didn't feel it was at all a stretch to move through the genres, which is more than I can say for even the best organized CARAs CDs. Audiences intrude on only a few cuts, making the entire collection listenable and enjoyable with a very little of that in-your-face-live-flawed thing that so many live collections have. This disc is that compilation rarity: a great retrospective for the familiar fan and a good introduction to the genre for a newcomer. Enjoy.

This album must have sounded to the producers like a great idea - how can you go wrong with the best of the best? Unfortunately, it seems to have sounded better to them on paper than it actually does on disc. Compiling rather incongruously seventeen songs from fourteen years of competition (mathematically, a bit more than simply "the best" must be represented, right?), this album is an object lesson in why an entirely live album just isn't worth it.

The very liner notes go a long way towards explaining why this is the case, noting that only half of each contestant's score depends upon their musicality — the rest is due to their performance and stage presence. Right off the bat, then, this album can't help but be only half as good (if that) as the original experience, precisely because each track was geared towards live performance.

What is the listener left with? A motley collection of mostly slow tunes, many of them jazz-influenced and few of them truly aurally engaging. Because the recordings are all live, little has or could have been done with the tuning problems that pop up from track to track (e.g. rather tremendously on Wicked Game), questionable lead deliveries (e.g. the faux brogue creeping in on You Win), etc. What the listener is left with is much less than half of the original; some of the songs make so little sense in the absence of performance that their inclusion seems no better than random (e.g. Amazing Grace, which must have been quickly annoying even for the live audience, and Yakko's World, ditto).

This album at best can have historical interest, or nostalgic value for the at-home listener who also happened to be at the concert ("Oh, I remember how cool that was!"). There are compilations out there (Hot Lips, Best of the Vocal Bands) which make much better use of the facts and features of recording, and thus much more sense as recordings. Best of the Harmony Sweepstakes just isn't worth it.

You know, I was there at Carl Connor-Kelley 's last performance with m-pact in 1996. I was singing with EP at A Cappella on the Hill, and we had learned the choral background part of Change in My Life so that we could sing with m-pact for their grand finale. It was a great experience and an emotional show, but to be honest, I don't really remember much from m-pact's performance. Probably because I was EP's music director at the time and was more worried about the fact that we had only looked at the music once before going on stage. Um. (Sorry Chuck! It turned out great, though, so that's all that matters, right?)

Anyway, m-pact's Change in My Life on this disc blows me away. Wow. There aren't many a cappella CDs that I'll actually listen to for the sake of one song, and I've played this one ad nauseum. Yes, the song has been done many-a-time before, but m-pact's live rendition is just so thrilling. There are several other highlights as well: Wicked Game, (was Chris Isaak in the house?), Ladder, and Coronet Man (go on, ladies of City Lights!) are programmed on my favorites list.

The thing about compilation albums is that oftentimes the collection sounds too assembled, too eclectic. Kudos to the folks who put this one together, because the careful song selection makes the entire listening experience a seamless one. From dance hits to '80s R&B to "traditionals" and comedy pieces, this album is a great listen. I hesitate to give it a perfect 5 rating because I feel that the album starts out a bit slow, there were some intonation issues (beginning of Wicked Game and Sign Your Name), and (this is going to sound awful....oh well) I'm not super impressed by the soloists. Still, moments like the kickass solo in SoVoSó's Say a Prayer and Boyz Nite Out's head-bobbing rendition of Wild Wild West make this one a keeper.

I have no idea how to rate this album. It is a compilation of "the very best" of the National Harmony Sweepstakes Finals Competition (supposedly celebrating the first 15 years). It actually only features groups competing in the 1993-1998 competitions. Since 1993, the Harmony Sweepstakes has produced a CD each year containing the best of that year's competition.

It seems this "very best" compilation album was just put together so that Primarily A Cappella had something else to sell (don't get me started on the issue of the National Sweepstakes being run by a CD company rather than CASA). I want to know why this is the "very best" of the 'Sweeps but only five of the seventeen groups included were actually National Champions. One would think that if they were judged fairly that most of the groups on the "very best" album would have been thought to be the "very best" the year they competed.

Something that would have been helpful is if they had included the year each track was recorded and what award (if any) the performing group had won. It's hard to compare a group from 1993 to a group in 1998. It also helps to know if a particular song was included because it was a best original or best arrangement (which may not necessarily mean best sounding performance).

This is also a truly live album in that each track was a once-in-a-lifetime performance. Even in normal live albums, you record several shows and keep the very best tracks. These are probably not the very best tracks from these groups. There are slight intonation and mixing problems throughout.

Overall, I would not recommend this album to anyone. If there is a group you follow particularly closely and would like to hear their Harmony Sweepstakes performance, I would recommend finding the recording from the that year and purchasing it.

This album has everything that an a cappella fan could possibly want. High energy, group diversity, tight harmonies, and most importantly, a natural (non-studio) sound from this compilation of live tracks from the National Harmony Sweepstakes Festival.

This is one of those albums that I really wanted to give a 5, but it just came up a little short in a few places. A few tracks, Johnny by 17th Ave All Stars and Rawhide by The Trenchcoats (a.k.a. The Coats), were a little stale to my ear and kept me from awarding this album the highest possible score. On the up side, this album is full of a cappella treasures! First and foremost, as soon as you BUY this album, (yes I said BUY the album), skip ahead and go right to track eight. This is m-pact before the additions of Britt and Greg and they still wail! The energy in this performance will cause you to stop whatever you're doing and jam along with them. I think it has been on repeat in my stereo now for two full weeks!

SoVoSó makes an appearance on this album with a stellar performance of Say A Prayer. The soloist on this track gives the most soulful performance that I've heard in a long time. Not to be out done by SoVoSó, A Perfect Blend puts forth their "diva-esque" soloist in Who's Lovin' You Now and she not only captures the spirit of this song, but she sends it to the audience with a positive energy not displayed by a lot of other soloists.

I could talk for hours about the good qualities in each of the tracks of this album. I loved Coronet Man by City Lights because of its amazing barbershop chords that locked with almost uncanny precision. I'm not one to go out and buy barbershop albums (actually I think I may only own one), but this track has invigorated my interest and love for the intricate harmonies of barbershop.

Other than the ones that I mentioned earlier, the only track that caught me off guard was Yakko's World by Metropolis. I'm sure it was chosen for its humor and amusement in a cappella singing, but I just didn't like it because I'm sure that Metropolis won the Sweepstakes in 1998 for reasons other than Yakko's World. I would've liked to see them represented with a higher quality track on this album that really demonstrates the reason why they can call themselves champions.

Okay, those are my thoughts on this one. Go buy this one before they run out!