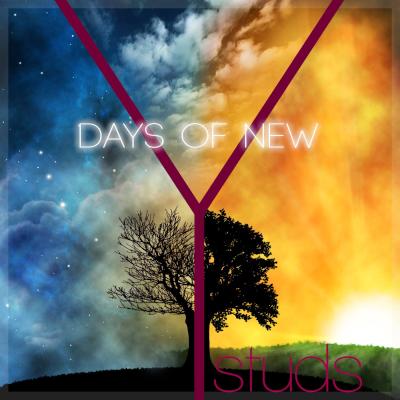 You only have one chance to make a first impression.

Oh Y-studs, have you never heard this advice? Opener The Days is a snooze. It lacks dynamics and intensity until near the end of the song when the arrangement delivers just a bit of added umph. Some blame falls to the original; it's not a particularly exciting song. There are some well-phrased backs, but it's a weak fish handshake, and the guys have to dig themselves out of a hole by song two.

Hariyu is indeed a stronger offering, in both its material and delivery. And following that, Menucha V'Simcha is noticably stronger still, offering a fiery focus and arresting scale forms.

But then I Need You slips back to par with The Days. Again it has a perfectly fine lead, but where the listener craves a journey, the song is content to lazily hang on the couch and eat your chips.

The Y-Studs, comeback kids that they are, know to end with strength — and they do, saving the best for last. Hashem Melech is an absolute earworm, full of heart and vibrancy with a lead whose throaty, passionate melismas and soaring belt are nothing short of spectacular.

Had the group started with this gem, bunched the two weaker English language tracks together as tracks three and four, and finished strong, listeners would have quickly fallen for this talented ensemble, having made up their minds at the outset. It's human nature. The Y-Studs shine brilliantly on the Hebrew material, and for those open-minded enough to listen through to the end, the Studs leave listeners energized, impressed, and wanting more.

On the cover art for their latest EP, Days of New, the Y-Studs of Yeshiva University show a picture of a tree which is barren on one side and fully in bloom on the other. The visualization strikes me as a somewhat apt, if jumbled, metaphor for their work here, which comes in like a lamb and goes out like a lion. The guys from Yeshiva start things off with a restrained version of Avicii's The Days and finish with a jubilant and unconstrained Hashem Melech, and it is hard to argue with going out on the best song. Unfortunately, it doesn't quite cure the ailments which afflict most of the EP.

To begin with, the eclectic collection of songs carries no real common thread, bouncing from Avicii to the Hebrew Pop/Rock of Omek Hadavar to ... a 1982 song by British songwriter Paul Carrack? With the exception of the closer, each song brings a hint of momentum or groove which is unfortunately blanketed with mellow restraint. It's actually somewhat puzzling. The Days is a danceable tune, one which should essentially be an ode to celebration and discovery, yet here it feels a tad sluggish and uninspired. Menucha V'Simcha has an undercurrent of groove and mystery which suffers from the same fate.

Nevertheless, each song has a redeeming moment. The Days feels toothless until the final 35 seconds when the percussion gets punchier and the whole group seems to shake off the lethargy. Hariyu feels awfully understated for a song about the joy of music and its use for religious praise until, once again, the final act when things start to cut loose and the basses start recklessly jumping octaves. This approach could be attributable to the arrangements, which are deceptive throughout the EP. They tend to start simple and homophonic, transitioning to more intricate textures by the end. This is not a bad strategy, but it might be wise to get some of those interesting moments happening early in each song before the listener moves right along.

The best song on the EP is Hashem Melech, which harbors an energy that both matches the praise of the text, and feels, for the first time, ready to really break free of the malaise. Ed Boyer, who mixed the entire EP, clearly noticed the bump in energy here and he runs with it. Boyer smartly chooses to break free of the measured restraint otherwise present and in the process unleashes a far more interesting and engaging version of the Y-Studs. If the group can find a way to do this — both in terms of arranging and the singing energy — more consistently, they'll be doing their listeners and themselves a favor. The group has the capacity for more interesting, engaging, energetic work: see Hashem Melech as Exhibit A. Figuring out how to consistently and effectively hit these marks should be their biggest goal going forward.

An all-male Jewish group of students from Yeshiva University, cleverly called the Y-Studs, has been hard at work in the group's first five years, releasing its second studio album, Days of New. While this EP doesn't reinvent a cappella as we know it, with some slick arranging choices and style variation, The Y-Studs have created an album that's worth multiple listens.

Each track is presented in a fairly straightforward, metronomic style. Even in a few moments where a tempo liberty might be taken to set up a moment, such as to end the introduction in Menucha V'Simcha, it isn't. But, whereas normally I might present this as a deficiency, I think the Y-Studs do themselves a service by keeping each tune primarily pumping along to a lively, well-crafted percussion track. Slight variations are made in the percussion to switch up texture even within sections of songs, showing that this was far from a copy-and-paste job. While there is a general simplicity and repetition to the arrangements in terms of their form, this is effective in setting up more complex or dissonant chords that are used when needed as transitional material. The abrupt modulations in Hashem Melech are seamless, displaying the arranger's skill in voice leading. The sounds throughout the album are seldom presented with heavy instrumental filters, certainly to please even the purist listener.

When the energy from all group members is in concert, some excellent things are possible with this group. I Need You is the perfect blend of feel-good solo and background vocals — think somewhere between Uncle Kracker's Follow Me and Still The One by Orleans — that the group captures adeptly. Hashem Melech has focused intensity and energy from start to finish, not to mention excellent personality, range, and flexibility from both solo voices, serving as a strong closer. Hariyu and Menucha V'Simcha each provide a different style embodied by the entire group while still maintaining a propulsive energy that does not slow down the album as a whole.

Unfortunately, this unified energy is not the case on every track. While I appreciate the Y-Studs' work on The Days from a conceptual standpoint, this opening track drags for me due to a flat, stagnant energy throughout the piece as led by the soloist. This inequality, especially with the booming percussion track in the second half of the refrain and the last section, leaves me longing for more cohesion.

Following on the heels of their first full-length album, Take Me Home, the Y-Studs follow with a strong showing in Days of New. If this is the result of the group's first five years, I'm excited to hear what the next five have in store for these gentlemen.

Days of New is available on iTunes and Mostly Music.