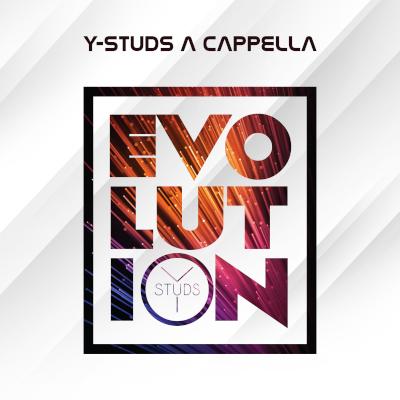 It is one thing to know who you are as an artist. It is another thing altogether to be able to communicate that identity through music. The Y-Studs effortlessly fall into this second group, showcasing Jewish music with flair, substance, and emotional depth on their latest project, Evolution.

Evolution is a more than fitting title for this album, not simply for the inclusion of a medley that charts the evolution of Jewish music, but because the Y-Studs sound is completely vivacious and fitting of today's music scene. Even more impressive is how the group mostly presents an assortment of exceptional Jewish music, which stays true to their roots and identity.

The album opens with a heart-pounding mashup in VeUhavtu x Baruch Hashem. Infused with relentless energy, ground-shaking percussion, and animated vocal lines, the track is a non-stop party that balances pop and world music elements. The effects help the song to have edge and life, capable of catering to any music lover.

This trend of massive energy and tons of rhythm continues on tracks such as Holech Lesham and Mahapecha Shel Simcha. Both tracks incorporate electronic stylings, stunning swells, and BIG vocal moments. The former displays a constant barrage of dynamics and creative layering, whereas the latter is a phenomenal dance mix that never lets up. Both tracks demonstrate that the group's range and inventiveness have no limits.

For listeners like me who have little familiarity with Jewish music, Evolution highlights how music is the great unifier, with its amazing presentation of culture and passion. And this is further evidenced on Evolution of Jewish Music. The Y-Studs present a bevy of popular and historical Jewish tracks. Chances are that you'll recognize at least one song as the fun and vibrant medley dances upon your ears with seamless transitions and an overall impressive vocal delivery.

The Y-Studs also include other popular tracks that mainstream listeners should be familiar with. Among these, Try Everything and Brother are the standouts. Try Everything is festive and surprisingly complex. It has a punch to the vocals and energy, inviting you to dance the whole way through. Brother has a certain comfort to it, brought by the level of substance and emotion that the soloist brings to the performance. The harmonies are tight, and the group chooses to include Hebrew text in the lyrics.

The only hangups about Evolution lie primarily in the balancing of parts. The mix itself could use a boost in the lower vocals, most notably in the bass. There are times that I wish I could feel the low-end in comparison to only hearing it. Additionally, vocal lines seem a bit thin at times, more so in terms of intensity, rather than layering.

That being said, you'd still be hard-pressed to find another group who can offer the level of artistic identity and quality of music that the Y-Studs have put forth on Evolution.

If you haven't seen one of the Y-Studs' award-winning a cappella videos, you're missing out on a delightfully enthusiastic and enjoyable experience. Similarly, the group's latest album, Evolution, delivers a fully-invested, high-energy, and smart musical product that doesn't skimp on the good vibes.

This overall execution of a fun, down-to-earth presentation of the evolution of Jewish music is highly successful. The first two songs, VeUhavtu x Baruch Hashem and Try Everything, brings a welcome tone of lightness with some underlying musical sophistication, utilizing the all-male a cappella medium effectively with power chords, tight harmony, and dynamics to match exciting register choices. In fact, some of the lowlights are only low because they don't seem to serve the Evolution theme; namely, a near-transcription of Michael Bublé's famous Feeling Good cover is simply lackluster in comparison with the other work presented here.

In any case, the highlights more than make up for any missteps. The filter choices and intensity from the solo to the background singers on Holech Lesham are thrilling. But the real musical gem on Evolution is Mimkomcha, which captivates with its folk simplicity before slowly introducing some dissonances and rhythmic interest to set up some beautifully tense dominant-seventh (barbershop) chords. And just when you're lulled into thinking it's a choral piece, the percussion enters to wrap up what is a wholly fulfilling aural experience. Kudos to all, especially arranger Craig Resmovits and soloist Josh Eisenberg.

I have no shortage of additional praise for individual performances and the group as a whole, but major props go to the recording team of Colin Egan, Mordy Weinstein, and Cory Hecht, the editing team of Jeff Eames and Mark Farnum, and the mixing team of Ed Boyer and Alex Green. I do so in part because of their stellar work — creating such a smooth and well-balanced product behind-the-scenes — but also because one drawback to streaming services without a physical copy is that these heroes could go unsung. I hope the Y-Studs, and other artists, will continue to seek out ways to credit their collaborators.

That said, do stream Evolution, and do so early and often, be it for the music or the smiles that come along with it.

Evolution is consistent in its inconsistency, so brimming with quality while its blemishes are so hard to categorize. This is because there isn't a prevalent method here. Normally I try to give albums very direct praise in some areas and very unified growth opportunities in others, but the Y-Studs demonstrate they know how to excel in just about every musical area. They simply don't do so nearly enough.

In many ways, Evolution of Jewish Music, the pseudo-title track of the album, is emblematic of this inconsistency. This mashup is filled to the brim with clever song inclusions, with great miniature arrangement sections and some incredibly smooth transitions between them. But every few songs a section comes up that's way emptier than it should be, or the harmonic progression and musical choices feel off, or a transition feels force-fed in there. Many of the soloists are stellar and really own the section they sing, while several feel super miscast. Background voices go in and out of brimming energy and enthusiasm, and tentative and bored-sounding padding. Blend goes in and out of incredibly cohesive and synced singing, and scattered noise. If I were to point to one consistent issue, there is a major disconnect between the soloists during ballad-like or quieter sections. Soloists will often want to ease up on the texture with more gentle or easy singing, while background voices won't sing below mezzo forte.

All of the above applies to the rest of the album. Evolution starts incredibly strong with VeUhavtu x Baruch Hashem. Just about everything, from solo work by Eitan Rubin, to intense background work, to an engaging and interesting arrangement by Gedalia Penner all work together exceptionally here. Try Everything follows suit on most of these — the lack of blend in the background voices becomes very apparent at times and it hurts the cohesion, but I still enjoy it enough to give a high rating for the other qualities.

After these two songs, the album starts to lose its center. A Sky Full of Stars feels too safe by the soloist and has a few critical issues in its arrangement that repeat in almost every phrase, and as a result, really harms the whole song's musical interest. Feeling Good has great solo work thanks to Michael Lefkovits, but the arrangement doesn't take enough risks to allow this cover to offer something unique compared to the original song. Sometimes that's totally fine — Brother is similar in its safer nature, but an incredibly tight arrangement by Mike Boxer, expressive solo by Yoni Gelfand, and a great performance from the rest of the guys make it one of the best songs on the album. Hineni Kan is carried by a phenomenal guest soloist, Shai Abramson, but the background voices perform on a completely different wavelength than him, and with an arrangement that doesn't match his interpretation of the song. Mimkomcha stagnates far too often and the rhythmic sections don't feel properly led into. Mahapecha Shel Simcha at first captures the energy and fun in the first two songs but then fails at keeping interest as the song progresses. Thankfully, Holech Lesham stays fun and interesting during its entire duration. As I pointed out, almost every one of the more critical points is offset by the exact opposite praise in another song. This leads me to believe that there is far less in this review about overall growth as a group as there is pushing for a more consistent vision and execution between songs. Higher consistency will result in a drastically better end product for an already great group and a great album.

One more thing I should mention in this review: when crediting covered songs in provided album liner notes, it is essential to credit original songwriters. Crediting original performers is not required, and is not a substitute.

Despite my qualms, Evolution is a great Jewish a cappella album with a lot of entertainment value. Its slick production and great use of more upbeat songs gives it a ton of replay value, while the song selection itself is also quite strong and fits the Y-Studs well (and as an aside, despite my critiques with Mahapecha Shel Simcha, it's still a joy listening to it adapted for a cappella). This is some of the best Jewish a cappella output in a while, and I look forward to the next Y-Studs project.

Evolution is available for streaming and purchase.