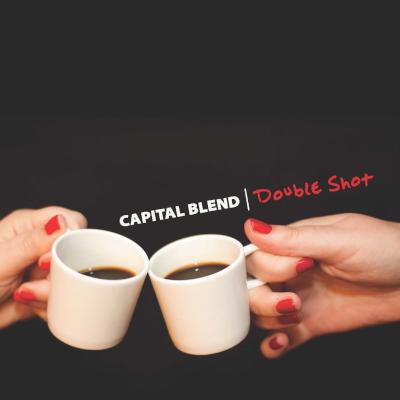 There's a lot of good music coming out of Washington, DC-based a cappella groups. It's become a hotbed of talent and variety within the Contemporary A Cappella League's Mid-Atlantic region. The ladies of Capital Blend are the latest to add their voices to the recording arena with their first full-length album Double Shot.

Double Shot is okay, nothing spectacular. And that's really perplexing to me considering the talent associated with the recording. There's a lot of standard fare in the song selections, with the occasional surprise (one almost giddily so). I've said before that I'm in love with the song Wings, and Capital Blend does an admirable job with its version and honestly made me think that this was going to be a pretty spectacular album. Chandelier has some magical moments. Add a Dolly Parton cover to your album and I'm sold —  Jolene is fun in a way that it probably shouldn't be (I don't care). And Home, while too fast to really set its groove, is a strong closer from the group.

The album is well-sung, with a nice group blend. Overall, there just isn't a lot of oomph that makes the album stand out. Some of the women associated with this group are truly heavy-hitters in our a cappella community and the production team is some of our strongest. So what went wrong when they were putting this all together?

Wait, not true, some of the major culprits are the arrangements, productions decisions and solo selections, so the combination of these factors leads to my overall displeasure with Double Shot. The arrangements weren't modified for the studio. Items that work supremely well (like the interweaving of other songs into the background) becomes a repetitive and annoying trick by the time you hear it more than once. Though the first time someone thought to admonish Jolene by telling her to keep her love locked down should win an award for brilliance. Some of the songs are missing key elements in the background to make them interesting for the listener. Other arrangements take the song in a new direction that it isn't able to handle (the gospel-inspired take on Yesterday is the most egregious).

The production decisions are baffling at times. I expected a lot of strength, power and depth on the tracks. These are women singing a cappella who should deliver this music with a great deal of pep, vim and verve! But we do not get that at all — we get a lot of safe, natural-sounding tracks that are pretty but not really exciting. As an example, there is no delineation between background parts. Everything (and I mean everything) sounds layered at the same level. No contrasts, which means that the sopranos and upper altos are SO EVER PRESENT ALL THE TIME, and my poor basses are no where to be found. Non-essential "jin, jin, jah, dah, doo, ba, ba, la, dink, dink, sha na na"s are so very important in every moment of every phrase of every song. But crazily enough, there are excellent moments of dynamics on each track: the thought processes were there, they just didn't come out in the execution. Balance, balance, balance is fundamental to making a good recording.

The soloists are hit or miss. Lizzy Bassen's take on Chandelier is one of the best that I've heard recently. And I've followed Tiffany Haigler's career as a performer since seeing her as the alto in the Angel City 4 in a production of City of Angels back in the day, to Rhythm and Blue, the Sil'hooettes, and now with Capital Blend. She's still killing it. Others don't pair as well with their tracks, either being strident in the upper or slightly off between belt and head voice in tonality and pitch. Again, in a live performance, the minuses are made up elsewhere through polish and emotion, but we just don't get that luxury on this recording.

Double Shot isn't terrible, I was just expecting a double of Grey Goose® and ended up with something slightly better than a single of Popov®. The talent is here, really, and if they just let Emerald City or Vocal Mastering add some firepower to the sound, Capital Blend could deliver a stronger recording next time.

Double Shot is the second album from the ladies of Capital Blend, and their first RARB submission. It's a solid collection of tracks, although there are a number of areas that the group can work on tightening up for future recordings.

As with a few albums recently, the opening track set my expectations slightly too high. Wings is fun, the group has a ton of energy, and the four soloists all balance and sound great together. It also doesn't hurt that mashing the Spice Girls into anything nearly guarantees you brownie points in my book. Chandelier, the second track, starts strong with a clever intro section that builds nicely and transitions smoothly back to a more standard version of the song, but the arrangement starts to drag by the end: a common issue on Double Shot.

Few of the arrangements on this album manage to keep listeners engaged through the whole song. While the group excels at finding snippets of other songs to mash in at the end of numbers, what I initially enjoyed in Wings quickly starts to feel gimmicky and a little overdone. The exception to this, for me, is Jolene, where the inclusion of Love Lockdown feels not just more intentional in the arrangement, but more thematically appropriate (almost downright hilarious).

Another area I think the group could focus on — especially as a female group and when (I assume) transitioning live arrangements to the studio — is a greater awareness of the sonic space across tracks. Most of the album is fairly static in that regard, something that is much harder for a female group to sell. Without the benefit of a live performance, the arrangement itself needs to have more movement. Some of this is also not helped by the mixing across the album. While songs like Wings, Jolene, and Home are more rounded and balanced, there are a number of tracks where the low end is barely noticeable, the sopranos are pushed too far forward, and the melody gets lost in the shuffle.

Despite some weaker areas, Double Shot features some nice highlights, including a number of strong solo performances. In addition to the quartet of Carolina Ravinskas, Emilie Begin, Kelly Biggs, and Lexi Goodnight on Wings, other standouts include Lizzy Bassen (Chandelier), Goodnight (Give Me Love), and a stunning performance by Tiffany Haigler on Marc Broussard's Home. It's always great to see post-collegiate groups putting out music, and I certainly hope to see Capital Blend head back to the studio and make the next album a venti. Maybe even with extra foam.

Double Shot, Capital Blend's first full-length album, gives the listener a lot to groove along to, especially in the beginning of the album. However, as I continue to give the album repeated listens, I find myself mixing up tracks in my head due to the uniformity of sound.

Let's start with the first track, Wings, which is my favorite song on the album. From the "ba dap ba ba ba" trumpet opening, Capital Blend has your complete attention. Starting with the quartet of soloists: Carolina Ravinskas, Emilie Begin, Kelly Biggs, and Lexi Goodnight, these four women blend extremely well throughout the entire track, especially in the multi-part harmonies in the chorus and bridge, and each delivers a grit and confidence that fits the emotion of the song perfectly. The driving percussion and the background vocals match the soloists every step of the way in terms of energy and dynamics — you can definitely tell that the group really likes this song. I also like the little additions in the bridge of the Spice Girls' If You Wanna Be My Lover and Spice Up Your Life from the background vocals — they fit perfectly in between the soloists and give the bridge an additional level of color.

Your Love delivers a similar level of intensity and passion, starting with the solo from Biggs and continuing all the way through to the stellar rock percussion.

Top to bottom, each soloist is perfectly selected for each track, and that's pretty difficult to do on an album of this size — I can feel the emotion and passion from Jessica Maloney's sense of desperation and pleading throughout Jolene, to Tiffany Haigler's emphatic call to go Home. I could go on and on about each solo.

But, as I continue listening, this same passion and intensity that's delivered in Wings and Your Love is matched by tracks where I am expecting a shift in the mood. In Ed Sheeran's Give Me Love, Lexi Goodnight delivers a beautiful and emotional solo, but it gets overshadowed by the background parts trying to sing over the solo — the dynamic levels don't match up. The same with Jason Mraz's I Won't Give Up, where the background vocals, as pretty as they are, engulf Lucy Samuel's solo. In my opinion, the solution is two-fold. First, there needs to be more of a dynamic contrast. For tracks like Wings or Tornado, it's appropriate to be at a forte dynamic level throughout due to the nature of the track.  But, for Give Me Love, where the soloist is more subtle and emotional (especially in the verses), the dynamic level in the backgrounds needs to match what the soloist is giving — if Lexi is giving a mezzo-forte, I don't want the backgrounds to give more than that; preferably less. In the choruses, it's okay to open up a little bit, but not so much that you all suddenly become the focal point. And second, and this is in  conjunction with the first point, is vowels. Throughout a majority of the tracks, Capital Blend relies on a "AH" vowel. With the tracks that have a more rock feel, an open vowel like "AH" is appropriate to give that extra volume and presence. It's less appropriate, however, in a ballad or slower song. Hence the reason everything sounds the same — the backgrounds on most of the tracks are singing on an "AH" vowel. This gets repetitive, and I challenge the group to choose different vowels, especially on softer tracks, to give arrangements added contrast and depth.

Capital Blend has set the bar extremely high with Double Shot, featuring high quality solos and great energy — the next steps are to be more creative with the dynamic range and vowel selections. If the ladies do that, they're on their way to a "5".