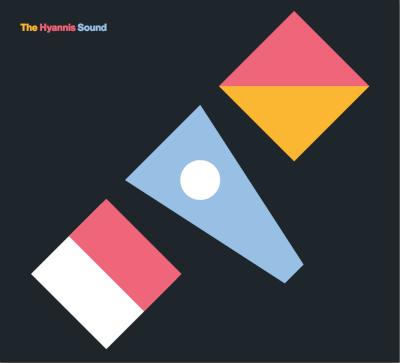 Hyannis Sound continues its history of solid recordings with H2O, which is really no surprise: this summertime collegiate supergroup has extensive vocal and production talent. All five of H2O's producers are HS members or alums, which certainly adds to the quality of the group's recorded sound — the producers (who also tracked, mixed, and edited the album) certainly get what Hyannis Sound is going for and can execute that sound here.

These songs skew heavily towards old classics. The Monkees, The Beatles, Jackson 5, The Weather Girls, and Dean Martin all make the tracklist lean mostly towards songs that were popular long before these singers were born. That fits with Hyannis Sound's Cape Cod clientele, but it means that H2O won't necessarily be that appealing to the group's contemporaries.

But even though the tracklist is full of safe favorites, Hyannis Sound doesn't just coast. These performances are gorgeous, from the opening chord progression on It's Raining Men to the smoldering build on Noah Berg's arrangement of Proud Mary. If there's one complaint about H2O, it's that most of these songs sit at the same crowd-pleasing energy level; there are a few ballads here, but the predominance of the same high-octane energy is a missed opportunity for H2O to have more of an overall story arc.

Perhaps because of this, some of the slower songs really stand out as being quite different from the rest of the album. Blackbird is absolutely stunning in its simplicity and weight of emotions: the phrasing and arrangement (again courtesy of Noah Berg) are gorgeous. The worst thing about this song is the abruptness with which it switches to Proud Mary; it's the only jarring tracking decision on the album. Soloist Jon Smith sounds amazing on Feeling Good: it's an overdone song, but he breathes fresh life into it.

The uptempo numbers have some highlights as well. Both the phrasing/arrangement (by Marc Whittington) and solo (Sean Switzer) on Sway make it one of the most memorable songs on H2O. Jackson Thea's smooth falsetto feels effortless on Sing a Song, and the whole group's delivery of I Want You Back captures the youthful energy and innocence of the original.

For better or worse, there aren't a lot of surprises on H2O. Listeners generally know what they're getting with Hyannis Sound. That doesn't make H2O any less enjoyable to listen to, though: the singers perform these songs flawlessly, and there are enough gorgeous solos, moving dynamics, and intricate arrangements to make H2O stand out among its collegiate a cappella contemporaries.

Over the years, Hyannis Sound has featured many of the most talented arrangers, soloists, and a cappella-ists in the American contemporary vocal music community. Making effective use of these talents, Hyannis Sound traditionally pumps out an album of intricate, slick, killer-sounding tunes. In assessing the group's last effort, Over The Bridge, I noted that while the total package was nothing short of excellent, I was disappointed to not see more innovation from such a talent-heavy group. With H2O, the group went even safer.

A quick glimpse at the tracklist reveals at least seven songs that have been covered many, many times in the a cappella community. In seeing this, I had two thoughts: "Did the group do something particularly interesting or unique with these songs such that I will never hear a different cover without thinking of the Hyannis Sound version?" and "Did the group decide to simply recycle a number of greatest hits or favorite tunes from the group's storied history?" Checking the tracklists from the back catalog, it appears the answer to the second question is "No."

The answer to the first question is a little more complicated. You see, I generally consider innovation in recorded a cappella music, a body of almost entirely cover music, to mean reinvention. With the exception of the richly voiced introduction (and later reappearing section) of Blackbird, and the tempo shifts in Proud Mary, Hyannis Sound does not reinvent much on this album. In fact, both of those songs revert to the original in tone and tempo, meaning even the reinvention is only temporary. So, if little of the repertoire here is reimagined, can it still be innovative? Of course the answer is yes, but only to a limited degree. Sure, many of the arrangements on H2O are intricate, and they often feature unexpected substitutions and even tonal shifts but I'm not convinced any of these changes are big enough to make the songs particularly memorable. Moreover, I don't believe there is always a purpose behind these changes. In the oft-covered Come Together, for example, the song occasionally goes from minor to major, but it's not exactly clear why. Is this change and the colorful belltones later in the song part of a single concerted theme, or mere efforts to change for the sake of change?

Luckily for Hyannis Sound, the group continues to feature several other characteristics which are memorable: soloists, energy, and production. As always, the group has culled a few of the finest male voices in the collegiate a cappella community. The star of the show has to be Andy Degan, who shines in raw and exposed moments on Stay and sits in the groove before letting it rip on Proud Mary. Strong performances are also offered by Jon Smith on Feeling Good, and the trio of Degan, Liam Fennecken, and Jared Suresky on It's Raining Men. The soloist lineup from top to bottom can't match that from Over The Bridge or High Tide, but it is still well above average. The entire group sings with an unbridled enthusiasm which is particularly notable on I Want You Back and Proud Mary.

Since Hyannis Sound has a number of accomplished producers and engineers among its alumni and production team (most notably Ed Boyer, Tim Bongiovanni, Colin Egan, and Noah Berg), the high quality of the sound on H2O is hardly surprising. Unlike some past efforts, a few of the songs feel stuffy or muted at times. Overall, however, the music sounds polished and very listenable.

The total package for Hyannis Sound continues to offer solid, well-crafted, engaging songs. The fact that I continue to want more from this group does not undermine the quality of what it has achieved, so much as it speaks to the very high expectations Hyannis Sound faces. Prepare yourself if you tire easily of retread songs, but Hyannis Sound is still among the best groups for polished, energetic male a cappella.

One of the reasons that I love a cappella music so much is that there really are no rules. Aside from the obvious rule of no instruments, virtually anything goes. However, when I think about H2O, I wonder if maybe there should be a couple of rules. When you take a whole bunch of the best male singers in collegiate a cappella from up and down the east coast and put them in one group, it's like listening to the a cappella all stars, and these guys deliver. It almost feels like cheating. This album is incredible. It has highs and lows, louds and softs, tearful emotions and moments of sheer bliss. It sucks you in and never lets go. If your a cappella library is missing a guilty pleasure, look no further than H2O.

Let's look at the highlight reel. It's Raining Men sets the mood beautifully with a rainfall sound effect, then adds some ethereal chords before absolutely rocketing into a perfectly sassy trio of weather "girls" Liam Fennecken, Jared Suresky, and Andy Degan delivering the fun. The bass and percussion drive the sound, and you can't help but go along for the ride. To top it all off, we get a beauitiful jazzy chord and fall right at the end.

Fight the urge to replay the first track and fast forward through a few more delightfully fun throwbacks, and we finally get to the first (and only) truly modern track in a cover of Rihanna and Mikky Ekko's Stay. The emotion on this track is almost too powerful — soloists Andy Degan and Devon Barley do an absolutely fantastic job of putting their hearts on their sleeves, and Noah Berg's arranged background does a tremendous job of letting the solo shine as brightly as it can. You might need some tissues when listening to this track, it's a tear jerker. Fast forward one more time, and you'll find Proud Mary, where the infectious fun rears its head one last time before giving the final sendoff. If you're not smiling by the end of H2O, go back and listen to it again. This album will leave you smiling and ready to dance.

If there's a problem with this release, its lone blemish is that it's almost too big. With so many tremendous and almost over-the-top showstoppers that could easily be the opening or closing number for an album, I find myself physically tired by the end. Now, I'm fully aware that I move around more while listening to music than the average person, but you cant help but get up and move when these songs take off. While I love the energy, I wouldn't mind having a bit of a musical breather. However, this is not a major problem. Hyannis Sound delivered a tremendous musical product, and I'm definitely throwing it on the top of my guilty pleasure pile.