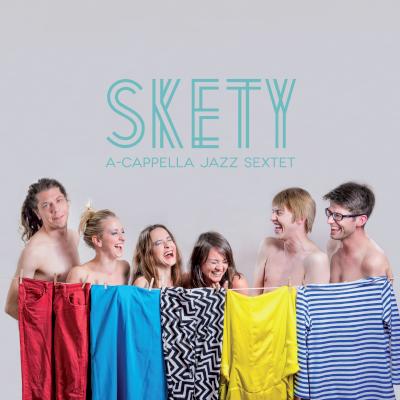 SKETY are worthy heirs to the Manhattan Transfer school of vocal jazz. Peppy young voices, excellent musicianship, and a jaunty selection of tunes make this disc a fun ride all the way through, and American aficionados can find joy in this group's familiar stylings with no fear that overseas talent will take the tradition on a wrong turn.

Since moving to Europe five years ago, I've found that the best big bands hail from Eastern Europe, and in my one visit to Prague, the town seemed to be crawling with professionally trained musicians scrapping for gigs. So I wasn't too surprised to see these Czech Republic singers turning in such good work. They clearly aim high and put in the time to get good results. Snazzy album opener Flat Foot Floogie is the only song with questionable English phonics, but it's such a bouncer it doesn't really matter. The vocalese tunes — notably Oleo Fugue and Václavák — are uniformly strong, while the slow tunes can be downright gorgeous.

The Nearness of You is just about perfect, lush and beautiful and easy to listen to on repeat. The slowdance vibe returns at the end of the disc with Lil Darlin', ending the album on a good set of chords. Producers Erik Bosio and Tobias Hug find a way to get a polished but warm sound that never descends into a Singers Unlimited-style wall, while Bill Hare's mixing burnishes the blend. The group also changes tempos with panache and finds a suitably jazzy Rat Pack swing when the music calls for it.

The two Pink Floyd tunes are pleasant but gratuitous for my tired ears. Us and Them becomes a particularly generic pop tune here, while Money is just its familiar self. Anyone who hasn't marinated in a cappella covers for 20 years might enjoy them; I didn't need the change of pace and really just wanted the jazz. In contrast, The Night Before is one of the disc's less polished tracks but I was drawn to its cheerful energy and Police homage "ee-oh-oh" accents. It sounds fresher to me; your mileage may vary.

Overall this disc is a great advertisement for Czech talent and a good calling card for these young singers. I'd go see them if they toured near me, and all of these songs will slot nicely into your vocal jazz collection.

There are three distinct musical styles that wind up on this album. The first style is hard-swinging jazz from the earlier part of the 20th century. Before jazz was about demonstrating incredible technique, it was all about having fun music to dance to. For the first two tracks on this album, SKETY knocks this out of the park. Flat Foot Floogie is infectious fun that just makes you want to snap along, and Sermonette has an amazingly well executed back-beat swing. While the bass and vocal percussion are uncredited for these tracks, they are amazing at driving the beat on these songs. They return and do this again on Oleo Fugue and Lil Darlin', but never as well as the opening statements of the album. Neither tries to flaunt their skills, instead they simply lay down an entire foundation that allows the rest of the group to swing hard with no loss of time or pitch. It's incredibly hard to do well, and they do it flawlessly.

The next style of song is the rock throwback. With these, the biggest problem for SKETY is that the jazz style that works so well for them and the style they are trying to perform in these numbers is just a little bit too different to be mixed together. The Night Before, a Beatles classic, is performed with a fusion of the original straight rock and the jazz swing that's prevalent for most of the album. There's just enough stylistic conflict that I just couldn't quite get comfortable with the groove. For Us and Them and Money, the jazz style is abandoned almost entirely in favor of Pink Floyd's trademark digital rock sound. This is a big risk for a group that has such a strong presentation when using jazz stylings. However, there's some really cool stuff going on here. It's not a blatant attempt to emulate the original. Instead, SKETY makes the digital sound their own while still applying some jazz chords. It's really quite impressive.

Finally, there's Václavák. Woah. This song is a completely different animal from the rest of the album, and it's nothing short of incredible. The first major thing about this song is that it's not in any time signature that I would remotely classify as "normal". I've listened to this song about two dozen times, and I still can't determine it. It's constantly switching and there is no consistent downbeat. If there were ever a song where bass and percussion would be important, it's this song. Remember how I said they were amazing earlier? They came back to prove their merit, and the upper voices shimmer over the top for a tremendous product.  It's clear that arranger Petr Wajsar knew exactly what he had to work with and manipulated every second of the arrangement in that favor. There are beautifully-placed dissonant chords interwoven throughout a meter that will make your head spin. It's in a class all of its own, and it deserves to be there.

There's a whole lot to love in this album. SKETY delivers a product that plays to their strengths and gives a deceptively large sound to a group of only six. SKETY is a strong display from some really good musicians, and it's definitely worth a listen.

The self-titled album by SKETY from the Czech Republic looks like a non-serious vocal jazz compilation on the outside. To my surprise, this release was more than that; once unwrapped, this turns out to be a sophisticated present. No wonder SKETY won the prestigious Ward Swingle Award in 2014. This album offers fresh-from-the-oven contemporary jazz music perfected by the a cappella mix master himself, Bill Hare.

To me, jazz is a top-grade, nerdy type of music. But SKETY makes you feel like it's an everyday snack that's easy to nibble at any time of the day. They have an engaging approach, just enough to get your attention without feeling disconnected. The constant ear-tickling chords strike the jazz feel in each intricately-designed arrangement.

The album starts strong with the cutesy track Flat Foot Floogie that almost sounds like a tongue twister that you'd learn as a kid on Sesame Street. Try saying the title two or three times and you'll definitely know what I'm talking about. Next up is Sermonette, a stank face-inducing track that makes you want to learn how to scat sing along with Štěpán Janoušek. Václavák is an ancient bohemian hymn arranged by Petr Wajsar and is one of those scat singing vocalese tracks that has different movements; there are lots of things going on, and it is musically genius in every way.

I could go on with the rest of the tracks as they consistently make you go crazy (in a good way) with the "ding ding"s and "mi mi"s in Us and Them, the "gargle-tones" whatchamacallit in Money, the airy and soundless "deh deh"s in Oleo Fugue —  vocalese which sounds like a ride cymbal in effect, the Carribean feel of The Night Before, and all that jazz! The surprises just never end.

This group placed the Czech Republic on the contemporary a cappella community map. These musicians sound as though they've learned music their entire lives, then decided to get together and apply music theory on this exquisite album. Imaginatively visualizing the sheet music of their arrangements, they might have used all symbols in the entire music character map to make their scores look like abtract paintings. I could not pinpoint one single flaw on this album. I'd be thrilled to listen to more SKETY.

The overall experience in listening to this album is such an honor. If you're a fan of vocal jazz, buy this album. You are in for a treat and that's not an exaggeration.