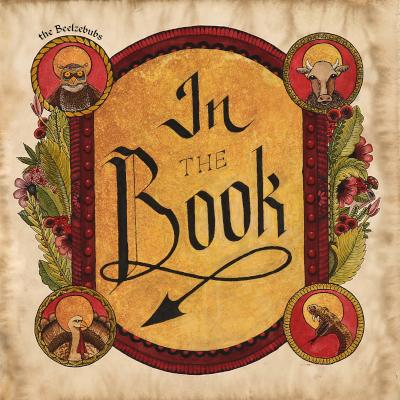 In The Book danced its way into my affections with a winning mix of pop songs, chipper voices, and a refreshing lack of pretention. The Beelzebubs know they're the Bubs and have a standing obligation to sound good. On this new disc, they also manage to sound like they had a lot of recent fun and want their new album to pass it on.

Love You Madly opens the disc brilliantly and quickly became my favorite track with its irresistable groove. Steal the Light and Honey, I'm Good. are the tracks that best keep the momentum going, through good rhythm and good cheer. Sleep rounds out the songs in that vein and — like two out of the three songs I just mentioned — features a charming solo from Justin Sullivan, who not only sings well but knows how to work the crowd. After the success of Love You Madly, Sullivan brings a burst of youthful glee to Honey, I'm Good. which is already a pretty bouncy number. On this winner of a track, the Beelzebubs lean toward the pop rather than the country, with snaps and handclaps that give the song a great new momentum.

Not all the tracks are clearcut succeses. The singalong hook saves Ain't It Fun from collapsing under the weight of its songwriting mediocrity. Savannah is a bit too Coldplay-esque for me, and likewise I don't bond at all with Not In That Way even though it is generally well performed. In contrast, Firefly provides more than enough acoustic charm to lift the performance above the sum of its musical parts.

There are a few ballads worth your time too, notably Davis Franklin's lovely turn on Retrograde. The Bubs make the most of their slow songs by interspersing them among true uptunes, not just formless mid-tempo radio hits. Franklin makes a duet appearance alongside Carl Haber on Firefly as well, and their duet fills that performance with a sweetness to savor.

Fun is a great theme for an album, more than holding its own against the theatricality of Helix, the gutsiness of Pandæmonium or other past incarnations. If the Beelzebubs are going to set a new trend, they'd have a hard time choosing better.

They've been doing it so well for so long that it's tough to find new ways to sing — or in this case, write — the praises of the Tufts Beelzebubs. At an absolute minimum, a new Bubs release almost certainly means interesting repertoire — smartly arranged, energetically but tastefully sung, and brilliantly recorded and produced. On a good day, it might also mean something truly groundbreaking — not likely to be attempted, let alone successfully, by other collegiate groups.

The group's latest effort, In The Book, falls squarely into the former category — it's pretty terrific, but there's nothing unusually extraordinary going on here except for the Bubs' typical commitment to first-rate musicmaking. Indeed, In The Book might well be titled By The Book, if you'll concede that the Bubs, in many ways, wrote (or perhaps co-wrote) the book on all-male collegate contemporary a cappella.

If that sounds like slightly qualified praise, I suppose it is — but only because I wanted to be blown away by this release and instead, I am just garden-variety impressed. There's certainly material here that I haven't heard covered too much elsewhere — Andy Grammer, Allen Stone, Matt Corby, LP, The Cat Empire — and that's a plus. But regardless of how wonderful the whole thing sounds overall — Ed Boyer, Bill Hare, and Alex Koutzoukis have a way of doing that on almost everything they touch — the contrast between the complexity and texture of the front half of the album with the volume and straightforwardness of the back half is striking and ultimately leaves me feeling somewhat unfulfilled.

Cases in point: the album opens as if it were fired out of a cannon, with the funky, punchy groove of Love You Madly, arranged by Carl Haber, which goes oh-so-right in so many of the places that so many collegiate a cappella arrangements go oh-so-wrong. Sure, there are block/pad chords in there to establish a harmonic foundation, but we get texture — with one, two, sometimes three counter rhythms and ornamentations instead of plodding eighth notes filling up every beat. We get variation as the song progresses. The percussive nature of the background vocals fits with the overall feel of the song. It's tight, it's fun, it's awesome.

Much of the same can be said for Honey, I'm Good. which takes a repetitive, relatively simple song and somehow manages to infuse it with enough energy and inventiveness to ensure it doesn't get old.

And at the opposite end of the spectrum, but no less awesome, is the bare bones, tasteful elegance of Nick Lamm's arrangement of Corinne Bailey Rae's cover of Is This Love. The sound is so tight you'd hardly believe it's a group of a dozen or so, and the silky smooth, restrained groove, with the breezy, seemingly effortless solo from Tom Lavin is fantastic. Speaking of which, Ethan Wise also deserves a major shout-out for his solo work on Sam Smith's Not In That Way, which is nothing short of spectacular.

Contrast all of that, however, with the final three songs on the album (and a few others sprinkled elsewhere) and you'll understand why they fall just a bit short of the Bubs' usual excellence. Other than the nifty slides in Retrograde, we get mostly volume as an inadequate substitute for real emotion and sophistication. Steal the Light similarly has a great snare roll, but the groove never develops much past the opening until we get a "kitchen sink" moment at the end where everything seems to get thrown into a bombastic final chorus. Resolution is a lovely tune, and the tribal feel is perhaps a bit fresh, but even as well sung as it is, it too ultimately doesn't really take the listener on any sort of journey.

As I've said before, in some ways, the Bubs can be victims of their own impossibly high standards. But the rest of collegiate a cappella has also come a long way in the last decade. While the Bubs may still lead the pack in terms of consistency, and on their best day, they may still be at the top of the heap, the gap is narrowing. RARB "5"s across the board are now harder to come by. It's a good kind of pressure, though, and one I have little doubt will motivate and invigorate the Bubs to continue their trailblazing ways.

In The Book continues the Beelzebubs' longstanding tradition of exceedingly well-recorded and well-sung albums. Little has changed for the Bubs behind the scenes: the power trio of Ed Boyer, Bill Hare, and Alex Koutzoukis is still responsible for the recording, mixing, mastering, and editing, and continuing that legacy behind the boards is definitely a major factor in the consistency of the group's recorded sound.

But I don't want to take credit away from the Bubs themselves. The current generation continues the group's long tradition of impeccable solos. Music director Ethan Wise sounds like a male Hayley Williams on Ain't It Fun; Carl Haber has a gorgeous whisper-sing on Firefly; and most memorably, Adam Gotbaum captures a perfect give and take in his voice on the album-closing Resolution. These are the types of performances that make listeners melt, and there's not a single soloist here who's ill-suited for his song, so kudos to the Bubs, yet again, for choosing the right songs and/or choosing the right leads for their songs. (Kudos also to the Bubs' consistency in thorough liner notes.)

Beautifully-sung isn't always enough, though. Here more than any of the previous Bubs albums I've reviewed for RARB, I want more feeling from these guys, more dynamics, and more goosebump-inducing moments. Resolution is the album's standout, beyond Gotbaum's lead: the song is beautifully-arranged (by previous music director Michael Grant), perfectly-paced, and the phrasing in the backs and dynamics truly channel the song's emotions. I wish every song on In The Book were like this. Some of these songs should've been cut; Ain't It Fun might be fun (and crowd-pleasing) to sing live, but the performance here is lackluster and goes nowhere. Savannah feels sterile despite some solid dynamics in the arrangement, and Is This Love is pretty but needs some serious dynamics to be engaging and memorable. Other songs succeed merely because they're exceptionally well-sung: there's not much that's revolutionary or cutting-edge about the Bubs' version of Honey, I'm Good., but they sing it impeccably. (I question whether they could pull this arrangement off live — but I have the same doubts about Andy Grammer himself, too.)

Rating In The Book causes a bit of a conundrum. This might be one of the Bubs' weakest albums in the last decade, but it's still head and shoulders better than most recorded a cappella in 2015-2016. Even though it's not the best example of the Bubs at the top of their game, it's still a collection of solid performances, an outstanding recording, and an album that's relevant and worth hearing today. It won't raise the bar, but not every album needs to.