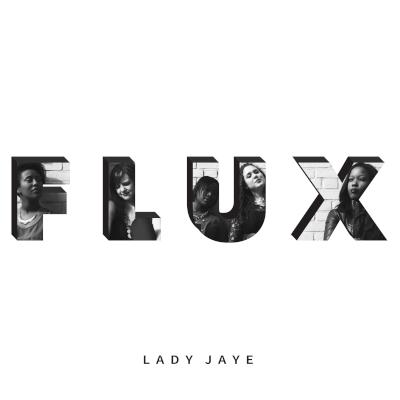 It's taken me quite a while to write this review about the debut "album" from the female supergroup Lady Jaye, as I've been in a constant state of flux about FLUX. How do you write about an album that is actually an EP consisting of music but also contains interspersed interviews of the group covering the essence of being female or being in love or honestly just being yourself in all aspects of your life to give it a "concept album" feeling? And how can anyone fault these choices?

The music is phenomenal and outstanding. Lady Jaye features five of the best female singers (singers period!) in the post-scholastic scene in the United States and some of the best performers and soloists in general. To be able to hear Ariel Arbisser, Happiness Chijioke, Brianne Holland, Samantha James, or Selame Scarlett is a blessing. To hear them all together is just incredible. So the crux of the album is met with aplomb.

Holland produces some of the best contemporary arrangements for the female voice that I've heard in ages and does a masterful job with Life Round Here, Q.U.E.E.N. and Problem. And both Christopher Diaz (Rocket) and RARB reviewer Robert Dietz (Citizens) show their ability to create charts that truly capture the Lady Jaye sensibility.

I have my particular favorites of the covers that they've recorded. Life Round Here and Rocket are full of stank. I mean that dirty, underground stuff that you had to sneak out of your parent's house to hear in some smoke-filled basement nightclub. All the feels are expressed. They are the heir apparent to the crown recently relinquished with the breakup of The Boxettes. And the more danceable tracks like Problem (which features Diaz on the repeated phrase "I got one less problem without you") sets a mighty strong party atmosphere.

Like I said, the music works in every aspect.

But what doesn't are the spoken interludes.

The feminist in me feels really bad about writing the above sentence (and this is the major reason why this review was so tough to write). Who am I to say that a group of women shouldn't put whatever they want on their album? They give voice to their struggles and triumphs, providing some heartfelt honesty about life and love in the 21st century.

But, why produce a concept album on your first outing? Now — full disclosure — I've had some mighty fine conversations in person with these women that have filled me with joy. But those conversations were all ephemeral, able to be reminisced upon but never repeated. The static and permanent nature of an album removes that spontaneity. So after maybe the fourth listen (picking out who was saying what in each particular segment was half the fun/challenge), I don't want to hear the same conversation anymore.

The concept is a strong one; each of the segments illuminates some aspect of the song that follows (or vice versa), which would have worked so much better as a link to a web page that held the interviews for that additional insight. On FLUX I would have appreciated ten more minutes of music instead.

To boil it down to the basics: fantastic album of music (all twenty-four minutes of a cappella and four minutes of the collaboration with Arbisser's instrumented endeavor The Jeff Love Band), but a bit overbearing as a debut "album". You probably won't be so crazy for the spoken parts after the first few listens, so I advise you to do as I did: make a Lady Jaye playlist (though you should probably already have one), and uncheck the lowercased tracks. Now go enjoy!

Lady Jaye's FLUX alternates between two types of tracks: songs and talking. They're pretty easy to tell apart on the tracklist; the talking tracks are titled in all lowercase, and the song tracks have titles that most listeners will recognize from contemporary pop radio.

The album's structure is an interesting one; it almost sounds like a group being interviewed on the radio, with performances in between, except that these talking tracks aren't exactly formal interviews. Instead, they feel more like eavesdropping on a girls' night of gossip and reflection. From the comments, listeners will get the sense that the women of Lady Jaye are empowered, independent, and fierce, and their song choices and vocal power all back this up. But it's not always clear how the talking relates to the specific songs here (on one track, someone refers to "this song", except it's not immediately obvious whether she's talking about the previous song or the next one). I like that these recordings sound off-the-cuff and not scripted, but I wish they could've been a little more concise; their talking is ramblingly philosophical, and there isn't a single one that I want to go back to and listen a second time.

Luckily, I feel the exact opposite about the actual songs, starting with the gorgeously trancelike Life Round Here; this is exactly the type of performance that makes me yearn for the occasional "6" at RARB — there should be bonus points for songs that are this good. Q.U.E.E.N. is gorgeously sassy, while Citizens has an amazing groove — these ladies know how to deliver a phrase with perfect dynamic flow and keep the tempo slow while still keeping the interest and the intrigue. Problem might be the weakest track here, which is more due to the source material than Lady Jaye's performance — it just gets a little repetitive and doesn't really go anywhere. (But hey, any time Christopher Diaz's voice passes through RARB's virtual office is a good day, for sure.) Frankie is a collaboration with the Jeff Love Band, a funk/soul group which includes Lady Jaye member Ariel Arbisser as a vocalist. It's definitely a bonus track compared to the other five, but it's fun to hear these feisty women singing with a horn section. Across the whole EP, I wish the liner notes had included the soloist for each song, just so I could give credit here.

These singers are exceedingly capable of nailing a song's energy and groove, and they know exactly the type of song that's squarely in their wheelhouse. FLUX sounds super-slick and super-produced, which fits with the group's radio-friendly pop sound. While the alternating talking songs are disposable long-term, they do help to give a sense of the personality and attitude of these singers. But the real treasure of FLUX is the songs themselves, which showcase these top-notch singers taking on some fierce contemporary pop songs. Extracting those onto a condensed playlist makes FLUX a highly enjoyable EP.

There's a group called Rockabye Baby! that performs instrumental lullaby version of pop/rock music — think Fall Out Boy on a marimba. I like to tease my wife that she might as well only listen to their versions, since she doesn't always listen to song lyrics. For me, though, the lyrics, the message, and the intention in a song are so important. I find this especially true in a cappella music, where the ability to convey that intention is so powerful.

FLUX, as an album, is half music and half open-table discussion among the ladies. Each song is preceded by a discussion track about why they chose the song, how they relate to tracks personally, what moments or lines resonate with each of them; conversations that give the listener so much more insight into who the women of Lady Jaye are and what this album is all about. It creates an experience more akin to attending a live show, where songs are introduced, performers are fleshed out into people, and you leave with a much deeper sense of connection. It's not something I would advocate across the board, but what a beautiful thing to have on an introductory EP to help listeners get to know you as performers.

You may have noticed that I haven't actually touched on the music itself yet. That's because there's very little to say other than the fact that these women absolutely slay track after track. Especially notable for an introductory album, Lady Jaye has obviously already settled into its group identity (spoiler: powerful, sassy, sensual women). Brianne Holland, who arranged most of the tracks on FLUX, manages to let each singer bring all her energy and oomph to her part, while still keeping a flow and progression to the song as a whole; this is not just five singers riffing on top of each other.

My only notes: Rocket might have benefitted from a little trimming; by the end I wasn't convinced that the arrangement needed the full six minutes to convey everything it had, however the energy and intention certainly don't drop out. Also, the last "bonus" track, Frankie (featuring the Jeff Love Band) feels a little out of place on the album, not because it's instrumental, but rather because there's something in the mixing that doesn't work for me. I understand the "classic big band" sound it's going for, but it comes across a bit too tinny, especially after the clarity of the rest of the album.

Lady Jaye is coming out of the gate swinging, and FLUX is what I would consider a must-have album (although for repeat listens, I'll cut the discussion tracks out of my playlist). How long until the next release, ladies?