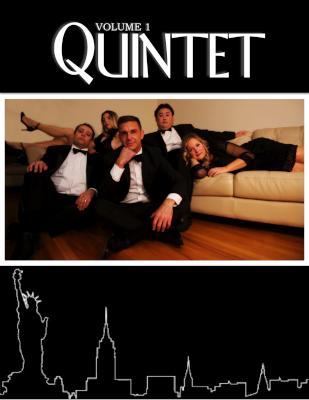 I have a real soft spot for vocal jazz so I was rooting for the new quintet named ...er... Quintet and its debut EP appropriately (if perhaps unimaginatively) entitled Volume 1 before I ever sat down to listen.

It was that much more disheartening to me, then, to find that as showcased on this release, despite solid musical resumes, ample talents and my positive predisposition, the group hasn't quite found its groove — at least not yet.

And "groove" really is a key word here. Chordally, the group features all of the crunchy extensions and substitutions one would hope — indeed, expect — to find in any first-rate vocal jazz effort. Scat syllables and tight group scats abound as one might similarly anticipate from this sort of music. Technically proficient, yes. But sadly, also (mostly) groove deficient. Of course, "groove" is a tough thing to quantify and describe. I suspect most musicians would say it's the sort of thing you have to feel in your bones and not the sort of thing you can convey in words. Still, I will give it a shot by highlighting what might either be causes or effects of this groove-lessness for me.

"Freeness of rhythm" is a note I found myself writing repeatedly. This is jazz after all, and whether it's a mid-tempo or up-tempo tune, the type favored by Quintet is very often a swing feel. Yet time and time again, the verticality of the singing, and the very deliberate and accented downbeats undermined the free and easy vibe I have to believe the group was seeking. Like most complex music, vocal jazz requires extreme precision to be rendered well, but it also requires the "appearance" and projection of spontaneity and effortlessness. More often than not, the opposite is true here. Everything feels hyper-calculated and as such, it may have been five gifted people singing a cool arrangement, but it rarely felt like a true ensemble interpreting and/or re-inventing standards in a jazz idiom.

As an extension of that rigidity, I was bothered by some of the choices in adaptation. Purely on a compositional level, at least two songs (the opening and closing songs) omit the verse of the song entirely. It's a valid choice, but one that also happens to bother me. More importantly, while jazz interpretations of standards often take huge rhythmic and stylistic liberties, I couldn't help but wonder how (or perhaps more accurately, why) Softly, as in a Morning Sunrise became such a bright, almost happy song (bordering on barbershop towards the end). In that same vein, I'm all for tributes to Nina Simone, but this take on What More Can I Say seeks primarily to replicate and re-harmonize the dexterous solo and instrumental stylings of the original without preserving or establishing the deep-seated emotion that is at the song's essence. Were it a wholesale reinvention of the song, perhaps I could go along with it. But to hew quite closely to the original musically yet strip it of its power is not compelling.

Lastly, dynamics and recording quality are areas where improvement would be helpful. Dynamically, the group is capable of effective pianissimos, subito pianos, crescendos and such, but they are utilized far too rarely and not with sufficient extremes. While the album is decidedly mid-tempo or faster nearly all of the time, it shades towards exceedingly brassy, with missed opportunities for more varied and extreme dynamic shifts that would have added drama and texture. As for recording quality, to their credit, there is a very natural sound in evidence and that's quite refreshing, especially for a musical style that doesn't need too much adornment. Still, there are sections that feel almost too "dry" in how they've been mixed, resulting in a blend that wavers and fractures now and again. And conversely, while it's difficult to know for certain, there are certainly a handful of spots (cutoffs most notably in a few places) where the studio manipulation is not as seamless and invisible as one might want it to be.

The funny thing is, even with all my issues, I still enjoy this album a good deal. More of this sort of music in the a cappella world makes me a happy camper in general. And I see great promise in what these "cats" can deliver if they build on their solid musical foundation by growing as a group and honing their skills specifically as performers. Makes me "jazzed" for Volume 2.

When jazz is the name of the game, you need pitch precision, blending beyond belief, and a craving for the crunchy chord. Quintet has all these in spades. All five members bring their incredible musicianship to the table. The songs aren't particularly varied, consisting of standards that every casual jazz listener has heard a hundred renditions of, and the styles aren't drastically different from each other, either. However, the quality, and the short, EP format, make up for these things.

Softly, as in a Morning Sunrise, kicks off the album beautifully. It has a sexy intrigue, reminiscent of Moondance. A layered polyphony makes this track really shine, along with fantastic dynamics. A technical issue: there's not enough space between tracks to allow for recalibration. This meant that I wasn't sure when Still Crazy After All These Years had started. Beautiful Love, another smooth track, stands out as something special.

The organic, unproduced vibe for this album is refreshing, and Quintet carries it off nicely. There's some pitch correction involved, but it's subtle and doesn't detract from the whole. What More Can I Say has the most emotional feel in the album. It's followed by a fun version of It's All Right With Me. The final track, There Will Never Be Another You, starts off exactly as I'd hoped. However, the style changes are way too slow to have the impact they should give, thus the potential for a great closing song is lost. The blend suffers on the last chord as well.

Not a perfect end to the album, but the other 90% more than makes Volume 1 a worthwhile buy. I'd like to see Quintet develop more of an individual identity since they already have this jazz thing lock, stock, and barrel.

Aptly-named Quintet, a New York-based vocal jazz quintet, makes a strong debut with Quintet: Volume 1. The EP is somewhat lopsided, front-loaded with its strongest tracks. Despite the late missteps, there is a lot to appreciate about the group's collective abilities and efforts in producing a solid set of songs.

Vocal jazz is different from standard contemporary a cappella in many ways, and Quintet excels in a number of those differences. The vocal quality must be light and clear enough with precisely matching vowel shapes for the advanced jazz harmonies to have their desired effect in a predominantly homophonic texture. The arrangements included in Quintet: Volume 1 are certainly ambitious, making the fundamental successes the group has with these ideas, especially in the first four tracks, particularly impressive. Voice leading is crucial to effective vocal writing in general, but especially vocal jazz, and while Quintet's is sometimes unnecessarily disjunct, their pure musicality tends to mask it. Another key element of many vocal jazz ensembles is the bass as the main rhythmic drive in lieu of vocal percussion, and Yuki Yamaguchi does an excellent job in both providing buoyant, percussive rhythmic stylings and anchoring the group harmonically throughout the EP.

Softly, as in a Morning Sunrise sets the tone well: tight background harmonies, simple and effective scat-like syllables, and a strong display of extremes in terms of dynamics, articulation, and mood. The syllabic simplicity and tonal complexity continue into Still Crazy After All These Years with the lighter tone of the song clearly expressed through both solo and background singers. Beautiful Love is somewhat more forgettable for me, with the voice/bass duet with occasional background interjections at the beginning feeling somewhat empty and overly straightforward for too long. But Quintet is immediately redeemed with What More Can I Say, a ballad featuring engaging chords, incredibly expressive solo lines, and a climax toward the end with a wonderfully-voiced common tone to highlight an adeptly handled modulation.

Unfortunately, this is where my praising remarks end. Something reminiscent of Dr. Jekyll and Mr. Hyde happens, beginning with the introduction of It's All Right With Me. This Cole Porter tune originally featured in the musical Can-Can was largely popularized by the Frank Sinatra and Ella Fitzgerald covers, becoming a recognizable tune from the American songbook in many different forms. I mention these covers because this appears to be a new arrangement, re-setting the bridge as the introduction rather than referring to any previous iteration. This introduction sets an entirely new tone: one that veers from the excellent fundamentals set by the group previously and sounds, quite simply, out of tune. Between the harmonic choices that lead to awkward transitions and semitones sounding somewhat inaccurate, many sections of this track are difficult to listen to and perhaps could have been fixed in production. The pitch and tonal instability issues continue into There Will Never Be Another You, especially in areas of sequencing. Though there are some impressive moments in the EP's closer, it doesn't have quite the same polish and intensity as the first two-thirds, leaving me with some sense of longing for more.

With hope, there will be more from Quintet, whose strong musical abilities must certainly translate to live performances as well. I strongly recommend giving this EP a listen and look forward to the next project.