No Strings A Cappella 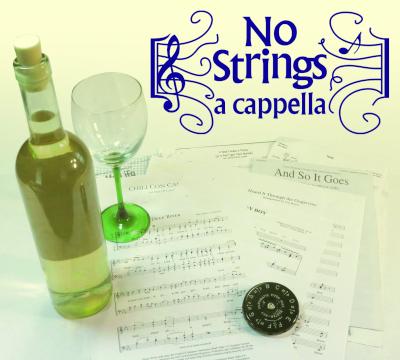 No Strings A Cappella's self-titled offering is tough to place. In examining the group's background, and chosen repertoire for the album, I can see that No Strings is a group that is truly invested in making music that covers a wide range of tastes, pairing traditional spirituals and choral music with contemporary classics. Between And So It Goes, Heard It Through the Grapevine, and Danny Boy, the tracklisting looks like a catalog of tried and true choir favorites. It's a selection that, while arguably clichéd, can be a strategy for a group as an intro to showcase its versatility with different genres and creativity in the execution of arrangements. Unfortunately for No Strings A Cappella, this particular album doesn't do that.

What prevents No Strings A Cappella from being successful in this run is the overall execution. While I can't call myself a true sound production buff, the first thing that will stand out to listeners is the muddy, crowded sound that a lot of the songs here have. While a lot of this can be remedied through the actual singing, the tracks don't sound properly mixed to accomodate the different parts. Many times the voices seem to be competing for the same space as opposed to sharing it. The bass sometimes feels thin, unsupported and washed out by the higher voices. Without consistent blend and coordination of the parts to create a collective sound, it is challenging to truly engross yourself in the album the way you'd like to.

Heard It Through the Grapevine exemplifies a lot of the issues with this album. The solo has decent energy and some lively boisterous character, but the backing vocals don't sound completely in sync. The moving pieces never quite gel to settle in with each other, either. The track feels rigid, sterile and cleansed of the subtle groovy funk attitude that gives the song personality.

The good news for No Strings, is that they seem to have a good ear for picking likeable songs. With some polishing and focus on figuring out a cohesive group sound, I'd expect to see noticeable growth on the next project.

Looking at the tracklist for No Strings A Cappella's self-titled album is like jumping in a time machine back to my days in college and even high school a cappella. I've performed either the same arrangement or a slightly different version of a number of these songs, including And So It Goes and A Nightingale Sang In Berkeley Square, so naturally I was very excited to listen along and reflect on my past. However, a large number of seemingly simple mistakes causes most of the album to not match the level of excitement that I had going in.

The album as a whole sounds like each track was recorded in one take, with very little production added on the back side (if any at all). Therefore, what you have is very much a "live performance" recording, which isn't necessarily a bad thing in certain situations. That being said, a group that records like this needs to make sure that they are 100% comfortable with the music, or you are going to hear mistakes within voice parts. And unfortunately, that's what you hear throughout the album. In A Nightingale Sang In Berkeley Square, for instance, there are a few moments in the beginning where the chords don't lock into place as cleanly as they should. Understandably, vocal jazz does have some funky chords that groups have to be aware of, but to hear that uncertainty come through on an album makes me think that the group wasn't too confident in the song coming into the recording process.

There are also certain places where I believe that the group's choice in tempo is questionable. For instance, their rendition of Duke Ellington and Irving Mills's It Don't Mean A Thing (If It Ain't Got That Swing) does not capture the uptempo swing feel of the original. One of the main reasons is the heaviness of the bass that overpowers the solo and the other background vocals, especially in the chorus. The bassline also just sits on the beat and doesn't "groove" like one would associate with a swing beat — there's simply no driving movement to any of their quarter notes that makes you want to dance or snap. I also notice what sounds like a number of unsure entrances in the lower parts. In particular, the basses in the bridge seem unclear as to where each entrance is in the repeated "got rhythm" motif, causing some unsettling and staggered entrances.

On top of the errors, I do not get a sense of balance between the voice parts across many of the tracks. In Run To You, you can hear the top parts very clearly throughout, but the lower bass part fades in and out depending on how low it goes. The group needs to be more aware of that moving forward — either the rest of the group needs to back off a bit and allow the bass part to come through, or the basses need to match everyone else in volume, which I understand isn't the easiest to do in that song. And the opening track, Chili con Carne, sounds disjointed and unsure of a cohesive direction despite its high energy from the group.

While there are a lot of things that No Strings A Cappella needs to focus on for its next recording, there are some positive spots. In my opinion, Fever and Heard It Through the Grapevine are two of the best songs on the album with powerful, soulful solos, and more importantly, blended and strong backgrounds that complement the emotional delivery of the soloists. If No Strings A Cappella can produce more songs like these two tracks while fixing a lot of the note mistakes outside of the recording studio, then these singers will be moving in the right direction.

This album bothers me. Every year, the standard of excellence for a cappella recordings gets a little higher. Technology gets better. Arrangers get more daring. A current standard recording often goes through a good amount of minor pitch alteration, rhythmic realignment, and part balancing. No Strings A Cappella has a rather blatant lack of technology in its recording. Therefore, the group's self-titled album is far below the level of excellence that's come to be considered "average". The lack of quality is bothersome, especially with the talent that is present among the group members. It's audibly blinding, requiring multiple listenings to realize what is happening in some tracks. It lead me to an interesting moment: is this album really that bad, resulting in the worst possible score I can give as a reviewer? In short, yes. At length, this is the Recorded A cappella Review Board. While the group has a lot of talent and potential among the group members, the subpar recording value results in a subpar score for No Strings A Cappella.

Let's look at what can be fixed. There are rhythmic problems on this album. Chili con Carne is the poster child for this. Of course, with the background lyrics of "bada chicka bada" performed at a fast tempo, there's bound to be some problems. With percussive singing, everyone has to be exactly on the beat. Otherwise, the percussion effect is lost. With the fast tempo of the song, the tempo is not established well enough across the group. When a more traditional offbeat salsa bassline is presented, this establishment of tempo is further muddled. The result is a very fuzzy "chick" noise somewhere in the vicinity of beats two and four. It's by really defining in everyone's mind the exact location of the downbeat that those effects work. No Strings A Cappella is on the verge of success with this, but still needs a little more work before the tempo locks in.

There's also a lot of balance and blend problems on this album. Run To You is the most noticeable offender. Most people know this as one of the most memorable songs from a cappella superstar Pentatonix's repertoire. However, after Pentatonix made the sheet music public, many groups have tried their hand at this song. That results in this song being held on a rather high pedestal, with lots of people knowing exactly when an error arises. Therefore, all of the little pitch errors are highlighted, more so than on any other track on the album. It's clear where the group members lose focus, if for only a moment. Harmonies become distorted by a flat tenor. An alto gets overzealous and their part becomes a focal point when it should not be one. The end result is a bunch of small problems that combine to really hurt the group's sound.

However, there is a glimmer of hope. There are some very strong voices in the group. Many of the soloists are fantastic, and only limited by the problems in the backgrounds. The opening of It Don't Mean a Thing (If It Ain't Got That Swing) has a glorious throwback to the sound of old vinyl records. There are some really cool jazz chords in the arrangements that are just begging to be ringing. And member Doug Estes gives a mean bassline. There are really cool moments and ideas that could help define No Strings A Cappella's sound. However, until then, they will fall by the wayside until the big problems are fixed.

In conclusion, I present a challenge to No Strings A Cappella. Embrace technology. It doesn't have to be to the extreme that some groups employ it, but it will help tremendously. Pitch correction will clean up those chords that are focal points of many jazz arrangements. Proper balancing will help naturally shape the audience's attention. Rhythmic alignment will clean up those tricky spots and make them really crisp. The use of technology to give the best sound isn't cheating, it's leveling the playing field. Quite frankly, I'd love to hear No Strings A Cappella perform on that level, because I believe it could be incredible.