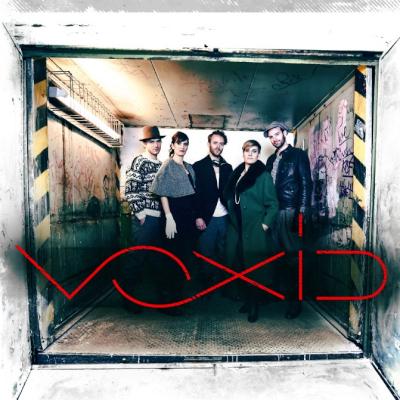 VOXID proves its talent and professionalism on this five-song sampler. The voices shine, the bass rumbles, the jazzy bits shimmer and the pop-rap bits hit their adult contemporary hip-hop mark. It's a pleasant listen every time. So why doesn't it make more of an impression?

That's the puzzle at the heart of this album. On the one hand — original songwriting! All the way through! On top of great voices, good production, good English diction (never a given with German groups) and a groove you can bounce to. On the other hand, the songs are kind of ... there's no glamorous way to say it ... boring. That makes them pleasant and catchy, just not memorable. I enjoy this disc with every listen — I would go to their show, I would buy the record after — and yet fifteen minutes later I can't remember much besides a vague sort of "bow-badow, ba ba ba bow" sort of thing. The first song is the bounciest. The second song is like the first song, but a little more mellow. The third song has the nice chords, the interesting variation, the tolerable rappy bits and the supremely annoying chorus. I could just about stomach the "she's a lady" tripe if not for the occasional "I like to see her naked" riff. So much for sophistication, now we're just taking a field trip to fifth grade. But anyway, it's pop music, best not to think too much. The fourth song is the slow one, and the fifth song is where the one woman gets to sing lead. She has a lovely voice.

As an ensemble, VOXID reminds me of Five Live, with more songwriting and a little less charisma. Sure, Five Live was a cover band, but they also dripped sex appeal that came through even on recordings. VOXID is an admirable addition to the German a cappella canon but isn't yet ready to create its own legend.

During one of my listens of this album at my Mom's house, she came down to join me. After listening for a few minutes, she politely asked me to leave the CD by her music player in the kitchen. Clearly I'm not going to see this CD again for a while.

I can't blame her — VOXID's self-titled album strikes a fantastic balance between modern pop, vocal jazz, and R&B throughout the five tracks that will make you feel a whirlwind of emotions. One of the many impressive tidbits about this release: all of the music is original, with composition and lyrics written by bass/beatboxer Daniel Barke and/or tenor Gabriel Fuhrmann. The arrangements are extremely easy to listen to and will get you dancing around your house, but these arrangements are not by any means easy to perform — they are incredibly technical and complex when you really stop to analyze. The chorus of Musical Treasure, for example, has the three top background vocals trading entrances throughout its entirety — just when the alto part enters, the tenor quickly comes in on the offbeat followed by the soprano on the beat. And yet, despite all of these entrances that could very easily blend together if the group isn't paying attention, each part is very distinct and easy to follow.

While it's hard to pick a song that truly stands out on this album, Love Native has definitely become my new track to groove to. In conjunction with Barke's simple and effective percussion that drives the rhythm forward, the background vocals sing quick percussive syllables ("dit" in the soprano, and "dow" in the lower parts) that grow dynamically as the length of notes extend and the chorus gets closer. The lyrics throughout the song are excellent, but the chorus in the track simply will not leave my head even if I want it to. Which, if I'm being quite honest, I'd rather it not. While sitting at my desk at work, I'll catch myself singing under my breath: "She's talkin' like a native/Speakin' the language of love/And when she dances the Earth just stops". That's one thing that I'd recommend for VOXID — they need to upload the lyrics on their website somewhere, so I can learn them faster — especially in the "rap" breakdown in the bridge, which is spot on. Another quick recommendation for the group is to indicate who sings the solo on each song on the CD jacket — it helps us give praise to the soloist/rapper for doing a tremendous job on this track.

The final two tracks are definitely more emotional than the previous three, with I Fade Away really standing out as a perfect end to this album. The blend of the group really shines here, as all parts are matching in volume and vowel on either staccato "doo"s or held "ooh"s throughout the first verse, and "dah"s at the end of the second verse. The syncopation and individual entrances that I talked about in Musical Treasure are prevalent here as well. Though I would like the verse to be a hair softer in the beginning, as it takes away a bit from the soloist. The level of sound at around a minute and a half in is perfect, and allows VOXID to add a little more dynamic contrast in that second verse and bridge than the first verse. The group fades away dynamically as the solo ends, which I think is a great touch by Daniel in his arrangement to gradually bring the album to a close.

VOXID really shows the a cappella community what can be done with extra thought and creativity in the arrangements — the group don't just stick to one genre, one dynamic level, or even one or two syllables, which is trap that some groups fall into. These singers demonstrate, that even with just five people in the group, they can cover a number of different styles and emotions. VOXID is definitely a release that I'll be listening to for months to come ... if I ever get it back from my mom.

VOXID, the first album by the German group formerly known as tonalrausch, consists of five well-written, energetically-peformed, and ably-produced tracks — but to view it simply as a collection of songs betrays a profound misunderstanding of the almost forgotten art of making an album flow well. And boy, does VOXID know how to make an album flow.

The EP starts off with the very fun Musical Treasure, and I almost always only notice that I've moved on to Summer Rain when it's already in full swing. The incredibly groovy Love Native transitions effortlessly into How Dare You, a gloomy piece with dubstep influences. Last up, the acoustic-sounding I Fade Away, which contrasts drastically with the electronic R&B vibe that unites the rest of the album — yet somehow, it closes out the album and bookends the work nicely. My favorite track is probably Love Native, which captures the mood of a fun summer jam in its verses and rap breakdown, topped by a chorus that got stuck in my head for days.

And it's largely one man who seems to be responsible for this flow — not only did Daniel Barke track, edit, and mix this album, he is also at least co-author on every track and pulls double duty on bass and vocal percussion. It's always nice to have an all-original album by a professional group, but having the consistently strong songwriting supported by an equally strong vision of the album in its entirety makes for a great listening experience.

The transparent upper parts and the fuzzily grumbling bass are strictly separated sonically almost all of the time. It's an interesting contrast, but it takes some getting used to, and it's not a solution that fits all songs equally. I think Love Native would benefit from a bit more definition in the bass, whereas in How Dare You the higher parts' synth imitation might have improved with a bit of help from the mixing desk.

Finally, I want to address my largest issue with this album. When I first listened to this release, I was rather underwhelmed — but it grew on me as I moved on, listening while attending to other things in front of me. VOXID, in other words, does not respond well to being focused on. I am inclined to believe this was also an intentional decision on VOXID's part — this album does not want to take you on its journey, but rather accompany you on your own. Some people use the term "walking music" for these soundtracks, ready to be added to your life to make it more awesome. As much as I enjoy that type of music, though, for the maximum score I would like an album that I can sit down with as well.

Whatever you call it — VOXID is a great album to put on in the background for almost anything, but don't expect it to sweep you away unaccompanied.