Sweet Honey in the Rock 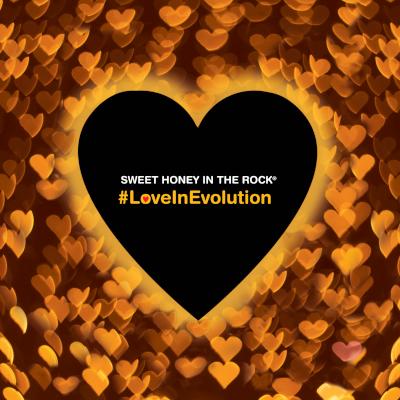 That Sweet Honey in the Rock is a pioneering group is without question. Four women founding a vocal ensemble in the early '70s to celebrate their heritage as African-Americans through song and dance was by no means par for the course at the time. And I believe it's also fair to say that in the 40+ years since its founding, SHIR has become universally (at least among those who fancy themselves aficionados of a cappella) respected both for their artistry — the talent and passion they bring to their musicmaking — and the activism, social conscience, and religious conviction which so powerfully inform their repertoire choices, original songwriting, and manner of presentation.

Why then do I find #LoveInEvolution so vexing to review?

Well, for one thing, I'm writing for the Recorded A Cappella Review Board, and a fair amount of SHIR's material isn't generally sung a cappella — in the case of this album, nearly every song has some "non-human" element, most often acoustic and/or electric bass and one or more percussion instruments. Instantaneously, that skews any numerical scoring efforts. Do many of these tracks connect and resonate as music with the listener? I believe so, yes (hence my score for "Energy/Intensity"). But when considered against the body of recorded a cappella music, how does this material measure up? Well on some level it's like asking to rank an apple on its success at being a vegetable. Most of this music isn't a cappella and doesn't pretend to be a cappella so ranking it as such is not so simple.

But continuing the (potentially poor) simile, this isn't even just a garden variety apple. This is a very particular, special, rare type of apple. SHIR's music has always placed its emphasis on soul and spirit first and technical precision second. Is the blend seamless? Absolutely not. Are the cutoffs and the articulation perfect? Not even close. Are the structures of the arrangement and the contours of their original melodies built more on repetition and purposeful monotony versus inventiveness and variation? You bet. So this too makes comparisons and rankings clumsy. This is music with context. With a backstory (dutifully provided in the liner notes). It's more about inspiration than mere entertainment.

"OK fine," I can hear the cynical among you say. "Does that give them a pass?" The answer is no. And it's why my scores here are not unusually terrific. To the extent one can consider this a cappella at all, there's a great deal of music that will outpace this album in technical brilliance, "wow" factor, general enjoyment, and repeat listens. And yet, you might want to pick #LoveInEvolution up anyway. Numbers don't tell the whole story. And if you listen with your heart at least as much as your ears, they won't even matter.

With #LoveInEvolution, Sweet Honey in the Rock has tapped into something elemental. The beauty of their voices, the power of their words, and the strength of their songwriting have combined to make music with emotional heft and lasting impact.

Though they have written new arrangements for several spirituals and covered Marvin Gaye, Sweet Honey's best songs here are their original works. The soaring composition of The Living Waters laments the pollution in our world, using the four women's voices to great effect by layering a rhythmic bass line with tight jazz harmonies. In Second Line Blues, which was inspired by New Orleans-style funeral processions, haunting and mournful wails overlay a steady drumming as victims of police violence and mass shootings are named. Oh, Sankofa is another standout composition, a promise never to forget the historical injustices against African-Americans over the last century. While many of their other songs continue in this vein, not all of the music is heavy. The jubilant IDK, But I'm LOL! and Same Ol', Same Ol' Love provide a welcome change of mood.

The sound is raw, the production is light, and instruments (percussion and/or bass) support nine of the fourteen tracks. The liner notes give the members of Sweet Honey in the Rock an opportunity to provide brief explanations of each arrangement or composition, rounding out the listening experience with context.

Sweet Honey in the Rock has been making music since 1973, and though the women in the group have changed over the years, its essence remains the same. Sweet Honey in the Rock meshes gospel, blues, jazz, and folk to make beautiful music with a message, and this group has achieved something special with #LoveInEvolution.

Super bias up front: the a cappella that I grew up on wasn't completely from a purist standpoint. The Nylons are known for using drum tracks (and occasional backing vocals) on their recordings and in concert. The Manhattan Transfer has more accompanied songs than truly a cappella ones (and a lot of their repertoire that's become a cappella is because collegiate groups made it so). The Swingles (Singers) have recorded with a jazz quartet or performed with a symphony or two. And such is now the case with Sweet Honey in the Rock on its newest album #LoveinEvolution, which features an acoustic and electric bass on a majority of the tracks as well as the percussion found in the diaspora.

All that is to say that for some groups, I give a wide berth as to what is "allowed" on an a cappella recording and in concert. Sweet Honey is definitely one of those groups. They were the first professional a cappella group I ever saw live. I'm still misty remembering what a moving experience that was for this young black man to hear six black women — who reminded him of his mom and grandmother — sing with such passion, spirit, wisdom and abandon. So while this is definitely a vocal group with instruments kinda album, it is still produced by one of the greatest a cappella groups of all time. So there's that.

With the recent retirement of the literal foundation of the group (bass Dr. Ysaye Maria Barnwell), the group now performs as a quartet with Dr. Shirley Childress still providing American Sign Language interpretation for their concerts. The current group on #LoveinEvolution is unique in that it doesn't utilize the extremity of range that previous iterations of Sweet Honey did. My favorite singer, Aisha Kahlil, isn't required to sing her screaming high soprano on this subtler version of the group. With the inclusion of bass player Romeir Antonio Mendez (with the blessing and encouragement of founder Dr. Bernice Reagon), you can hear the absence of Barnwell. But Mendez is really good! I only realized some of the tracks were not vocal after looking at the liner notes. Though I miss Barnwell's incredible support and rhythmic expertise, Mendez's addition to the music is superb.

Some of the songs on #LoveInEvolution will ring more clearly and emotionally than others (The Living Waters is this generation's Wanting Memories), but truthfully there isn't a reason to single out any song for one reason or another, because if you know Sweet Honey, you'll enjoy this album; if you don't know them, you better learn.