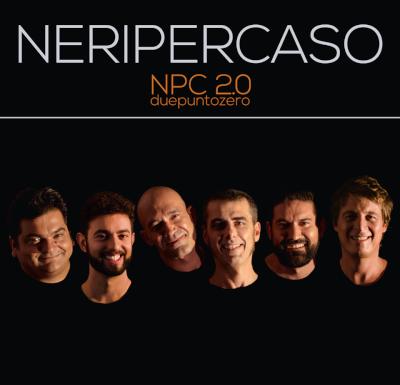 Neri Per Caso's new release is more like a handful of EPs on shuffle. There's the signature NPC upbeat pop, a selection of jazz and easy listening, the Italian soft rock, and the novelty tunes. Everything is well sung and shinily produced, showing that Neri Per Caso hasn't lost a step since the last time they came RARB's way.

Englishman in New York kicks the record off on a fabulous note. I love the cold open with the chorally arranged bridge, followed by some top-notch vocalese and then the rest of the song as we know it. These days, it's so easy for this song to sound tired and dated, but NPC breathes new life into it. A few tracks later, Come away with me turns up in brighter, poppier form than Norah Jones's contemplative soft-jazz original, and later in the disc But not for me turns up sounding as much like the Beatles as the actual Beatles song, a cheerful and rather Italianate take on Michelle.

The actual Italian songs also come off well. Lune per noi, written by one of the group members, is a tight and pleasant listen, while Un'altra storia makes surprisingly good use of the real saxophone that joins in. Make love (sempre con te) is a clear Bobby McFerrin tribute, mixing familiar elements of Don't Worry Be Happy under handclaps, some nice jazz lines and a melody reminiscent of Walking My Baby Back Home. The Italian songs are generally more original and fresher sounding than the rest of the disc, even the parts that are impeccably performed.

Caravan of love is the only song to slip on tuning, despite its nice solo and reverb-heavy prodution, while Chandelier is the most out-of-place — I felt it had wandered in from somebody's Bill Hare-mixed U.S. college disc and was wandering around a bit lost. The performance is fine, but I don't think it's the best use of Neri Per Caso's talents given the rest of the material on offer. In contrast, two of the Latin numbers — while jarring at first — grew on me over time. La vida es un carnaval starts off in Vocal Sampling mood before picking up in the second half. And whatever else you may say about it, Guantanamera is a standard, presented here with a generous helping of pop cheer and handclaps and that NPC bounce. Those qualities are back in spades later on a winning rendition of 'S Wonderful, showing Neri Per Caso at its traditional best.

With NPC 2.0 duepuntozero, Neri Per Caso is making a credible bid of being a lot of things to a lot of people. They have the talent and charm to broadly succeed, while retaining a bit too much pop cheer to win over anyone with a limited tolerance for brightness. If pop cheer strikes you as more of a strength than a weakness, then this may be an album you could love.

Whatever it is, it gives me no pleasure to report that Neri Per Caso's 20th anniversary release 2.0 did not live up to the very fond memories I had the time Neri Per Caso sent music RARB's way back in 2008.

That effort, Angoli Diversi, was almost exclusively in Italian, featuring music mostly unfamiliar to me, and using guest soloists throughout. The majority of 2.0 is a hodge-podge of English language standards and/or covers, and sadly, they're rendered pretty plainly. Or at least not sufficiently interestingly to really hold my attention.

Most consistently, these gents have real facility with vocal jazz such that existing classics like But not for me and 'S Wonderful hold up quite well when filtered through the prism of harmonic extensions, open voicings and the occasional unexpected chord substitution. Even then, with five voices plus vocal percussion, it's still not hyper-dense — probably more Mel-Tones or perhaps Manhattan Transfer than Singers Unlimited (if you don't know them, look them up!) — but it shows complexity, dexterity and inventiveness that is sorely lacking most of the rest of the time. Truth be told, they lean on scat solos a bit too often as well. But in vocal jazz, it's fitting, and the scats are generally excellent so it's hard to ding them for that. A few tracks also skate by on their energy and peppiness — Make love (sempre con te) and Guantanamera come most immediately to mind.

To be clear, the rest is sung quite capably, but the work is marred by one or more of odd stylistic/interpretive choices, arrangements lacking development, and/or a sameness of volume and mix treatment. To wit, Come away with me is a plaintive, sparse song as performed by Norah Jones and while I'm all for interesting and engaging artistic license, one has to wonder what the impetus was for turning it into the full, rich, almost bouncy rendering offered here. Songs like Human Nature and Chandelier start strong by establishing catchy motifs for the arrangement of the first verse and chorus, but then they cling to those established grooves like grim death with nary a rhythmic or harmonic development through repeat after repeat. These guys already keep their songs relatively short, but in many cases, I had heard everything there was to hear after the first 1:30 minutes or so (and in the case of Caravan of love, I kept waiting for the arrangement to start — yawn!). Also inexcusable is the nearly complete disregard of dynamics by the group, and the seemingly complete disregard of the soundscape by the engineer and producer of the album. Basically, it's mezzo forte or louder almost throughout and every song — whether it's Gershwin or Sting or Sia or Celia Cruz — gets what sounds like the same very live, very "wet", very loud mix. Heavy on reverb, low on nuance and specificity to the song at hand.

And not to pile on, but despite very classy, high-end packaging — worthy of a 20th anniversary release — the extensive booklet is entirely in Italian so if you don't speak the language, you won't really get to enjoy it much (unless you make a date with Google Translate as I did for a bit). And oddly, only the Italian songs are credited to their authors. So George, Ira, Sting, Norah, The Beatles et al — sorry folks.

Notwithstanding all of the above, I stand by my belief that Neri Per Caso is no less the talented sextet they were when I last heard them nearly a decade ago. But this is something of a step backward. They can definitely do better and I, for one, looking forward to when they do.

The men of Neri Per Caso have been making music together for over twenty years, and NPC 2.0 duepuntozero is a reflection of their professionalism and skill, and a testament to their longevity.

A thick booklet, entirely in Italian, accompanies the CD and documents the evolution of the group.*

The sextet originally consisted of two sets of brothers who are also cousins, and two childhood friends. They formed in 1992, got their break at a music festival in 1995, and went platinum with their debut album, Le Regazze, selling over 700,000 copies. They've toured extensively ever since, recording a few more albums along the way. With NPC 2.0 duepuntozero, Neri Per Caso bids farewell to original member Diego Caravano and welcomes Daniel Blaquier, who was discovered on the Italian version of The Voice.

While I enjoy each song on NPC 2.0 duepuntozero individually, collectively it does not feel like an album. Neri Per Caso skips genres and decades like stones across a lake. They cover Sting, Gershwin, The Beatles, Michael Jackson, Norah Jones, Sia, a Cuban folk song, and throw in a jazz piece in Italian featuring an actual trumpet. Rounded out by a few originals, this scattershot collection makes for a confusing listen.

My critique is lessened by the fact we live in an age of digital downloads. It's hard to fault Neri Per Caso for making the deliberate choice to record its history when each of these tracks would be a solid addition to the right playlist. From what I've gathered, they've performed many of these songs for years, and NPC 2.0 duepuntozero is the first time they appear on an album.

Neri Per Caso's sound is beautiful and sweet throughout, with nary a sour note or moment of uneven blend. If I were to quibble, I felt that they reduced Sia's searing Chandelier to a pleasant and harmless pop song. I was also baffled by an incongruous vocal percussion breakdown during Englishman in New York.

However, these complaints are minor in the grand scheme, and Neri Per Caso fans should be delighted to finally have these songs available in such a polished format.

*Note: as I am not fluent in Italian, I relied upon the Google translation of numerous Italian news articles to piece together the story behind NPC 2.0 duepuntozero.