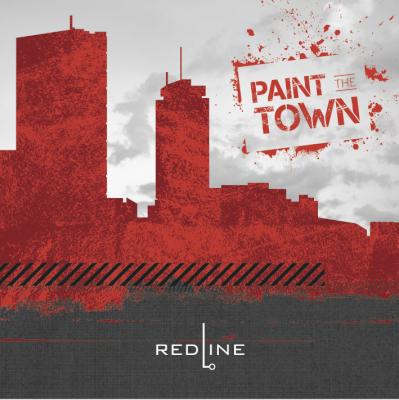 We haven't heard from Boston's Redline since its 2011 release Inbound, and the CAL group's sophomore release Paint the Town continues the strengths the group showed on its debut. These guys still have a lot of energy and are still having fun: you can almost see them dancing on I Feel Better and Shut Up and Dance. Even the slower songs still have energy; where other groups' backs can zone out on ballads, Redline stays engaged. The changing parts on the arrangement of You're the Best Thing That Ever Happened to Me keeps the song trucking along, while the group's cover of the Glee Cast's version of Ne-Yo's Let Me Love You (Until You Learn to Love Yourself) has rich, soaring moments that prevent the song from stalling.

The best track here is the sassy Sleep, with a compelling solo by Andrew Kenyon and a tremendous arrangement written by Kevin Guest and executed by the group — it's bouncy, it's got energy, it's got high parts that pop out at just the right time, and it's just fun to listen to. (Even the use of one of my pet peeves, recorded hand claps, doesn't kill my enjoyment of this song!)

While Paint the Town doesn't have as many issues with syllables as Inbound did, there are still a few awkward moments that stick out. Sometimes it sounds like the guys are singing transcriptions of sounds, where more guided tones (like, "electric guitar" or "chimes") would have been more appropriate. The transitional line on Gone, Gone, Gone that sounds like "crin-din-doh, crin-din-doh" is jarring, and the guitar-like "jang-jang-jang" part on Sing is completely distracting from the solo line, especially because there's nothing else in the arrangement. Even though that's the way Ed Sheeran's original song is written, it just sounds too thin here, and the harsh syllables take away from the solo. Elsewhere on the album, the group relies on song lyric echoes in the backing parts — too much so for my ears, as it makes the group sound a bit collegiate, but that stylistic choice may work for different listeners.

My biggest critique for the guys in Redline is to work on dynamics — and I mean that both in terms of dynamics throughout the song as well as the balance between the lead and backs. Paint the Town was recorded by two members of Redline (Kevin Guest and David Raiser), and edited, mixed, and mastered by Liquid 5th, so it's unclear who specifically made these production decisions. But the tender Hiding My Heart jumps out of the gate too strongly, when the song could've been so much more dramatic coming in at a whisper and really stealing our hearts. The backing arpeggiated lines are beautifully-sung and note-perfect, but I don't need to focus on every note here; I need to hear Raiser and Andrew Kenyon's leads (side note: the choice to have two leads doesn't really make sense here). Similarly, Who's Gonna Save Us could've come in much quieter and then grown each verse/chorus into something bigger. The song is well-performed, but it doesn't take listeners on a journey.

Overall, Paint the Town is an energetic, engaging album that's fun to listen to. Everything sounds great on the surface, but closer listens will uncover details that are distracting to the overall sound. Just a few tweaks to dynamics and syllables would make a steep change in the group's ability to deliver a show-stopping song. But Redline should still be commended for its ability to capture its singers' enthusiasm and intensity, from the leads all the way to the backs.

Boston CAL group Redline has enjoyed some success in the a cappella community since its first album, namely inclusion on CASA's sing 10: neon and a CARA runner-up finish for Sleep. While Sleep is an excellent a cappella track, it is more of an outlier than the norm on Paint the Town. The newest album from Redline contains a few gems but, sadly, does not engage listeners for the duration.

The album begins strongly. I Feel Better is somewhat mechanical syllable-wise, but it is energetic, pleasing, and a solid way to kick off an album. Redline follows this opener with Sleep, which is brimming with personality, musicality, and a strong rhythmic drive. Say You Love Me slows the pace down, but with some tender solo vocals and varying dynamic levels, it appears to contribute to the group's positive momentum.

Then, Sing happens: the Ed Sheeran tune that has become standard a cappella fare, perhaps most notably with a dynamic cover by The Exchange. If you were looking for a track along those lines, this cover is not it. The track opens with the familiar shout vocal. Not only are the background vocals oddly exposed and sluggish, but the rhythms are straightened and simplified (see also: incorrect). This, in many ways, sets the tone for the rest of the album: sluggish, and with choices either less than ideal or otherwise unsuccessful.

In some cases, a choice is made that makes for poor digestibility. For example, Gone, Gone, Gone is presented as a ballad, which is a fine choice. But in removing the driving vocal percussion, the syllables become busy and a rhythmic effect is created which does little more than to expose a counterintuitive text setting (long afTER you're gone), and similar expressive phrasing issues. Overly busy syllables to make up for a ballad choice can also be found in Let Me Love You (Until You Learn to Love Yourself), a choice that detracts from a potentially innovative idea in reimagining the song. In many cases, after the first couple of tracks, it sounds as if the studio had to create some of the music's dynamics for the background vocalists, which will naturally result in more mechanical-sounding music.

There are some notable moments: Cheating and You're the Best Thing That Ever Happened to Me are full, well-executed arrangements that go far beyond simple harmony and feature solid textural contrasts. Who's Gonna Save Us is also enjoyable, though I thought it may have been a cover of my favorite Australian punk rock band, The Living End, and was disappointed because the track listing was not specific enough.

There are many areas of improvement for Redline in full album production, but I can unequivocally say that Sleep and a few other tracks are can't-miss, and I highly recommend them.

The Boston area is a lovely place for a cappella music. Whether you're looking at high school, collegiate, or non-scholastic groups, you're bound to find something for everyone and a presentation you're going to enjoy. With Paint the Town, Redline gives us a fairly conservative presentation that shows glipses of brilliance, but not enough steady innovation to be considered excellent.

One of the biggest problems across the album is with the material. Just by listening to pop radio over the past week, I've heard over half the songs on this album. There's nothing wrong with pop music, but a large number of groups cover pop music. At some point, most arrangements begin to sound the same if the arranger doesn't take the time to make the arrangement their own. For example, Sing is a great song, but most of the arrangement is a fairly direct transcription, leaving very little for Redline to claim as their own. Conversely, Kevin Guest does a great job in changing Gone, Gone, Gone into a new mixed-meter ballad. If I didn't know the original song, I would believe that Guest transcribed a song that tailors very well into voices. However, as I do know the original, I can safely say he does a fine job in creating an arrangement that lets the group express a great deal of emotions with Andrew Kenyon leading the charge. Of course, many of the other arrangements do very well to not be just direct transcriptions, but this is the most notable case.

Simultaneously, there are some problems based on the style of the source material, as many of today's pop songs have an astounding number of layers. Thanks to octavizers, synthesizers, and any other number of electronic tools, it is very hard for sixteen guys to fully mimic the entire sound that you hear on the radio. Add in a recording style that doesn't significantly alter the recorded voices to a more digital sound, and suddenly the arrangements become more monotonous. The accents aren't necessarily as noticable, and the overall arrangements just seem more muted than they could be. Shut Up and Dance really shows this, where there's nothing really wrong with the song, but there's nothing all that spectacular either. Of course, this isn't a hard and fast rule. Let Me Love You does a great job of tailoring to voices, letting their natural timbres shine through. This may also just be my somewhat biased love for ballads, but this arrangement is great. Kevin Guest does a great job (again) of letting the voices fully immerse into the story. There's power and vulnerability moments apart, and it's very tantalizing to the ear.

It's not a home run for Redline, but it's not a swing and a miss, either. There are good moments, there are great moments, and there are moments that just don't quite hit the mark. The good news for these men from Boston is that all they need to do is consistently lock into those moments that make them great, and make them happen more frequently.

Paint the Town is available through iTunes, CD Baby, or the group's website.