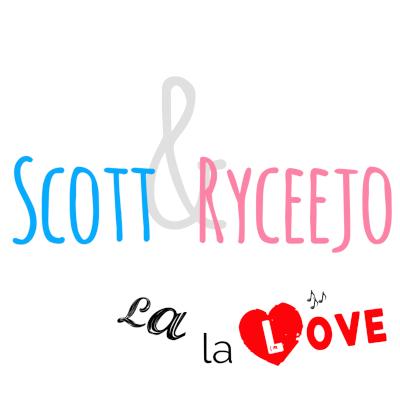 Scott & Ryceejo bill themselves as a self-produced husband and wife a cappella duo, and La La Love is their debut album. They are BYU sweethearts, where Scott earned his a cappella bona fides as a member of Vocal Point.

La La Love is, as advertised, all about love. In fact, their recordings of I Choose You and Stay Stay Stay were first given out as wedding favors. It is all rather darling, and I found myself singing along, thinking fondly of my own a cappella love (14 years together, 12 years married, 4 aca-children).

The target audience for La La Love is the starry-eyed and hopeful, for whom romantic and ever-so-twee songs will bring great joy. These are the ones who will adore this young married couple who have recently welcomed their first aca-child into the world — an aca-child who will surely be brought into the group as soon as he/she can harmonize.

The more jaded will find the abundance of sweetness to be saccharine. As my four-year-old son put it, "Turn it off! These are yucky songs about love!"

As far as a cappella goes, there is nothing innovative about the arrangements or unique about the voices. It is a compilation of straightforward covers, solidly produced and well sung, with a blend that is to be expected from a duo blending with themselves. Still, La La Love is a diverting and happy thirty minutes of music. Scott & Ryceejo are most definitely doing their part to fill the world with silly love songs.

Scott & Ryceejo are a unique husband and wife duo whose love and affection shines through their music. Their debut album La La Love is bright and warm, and full of personality. The genuine connection the two convey is no easy feat and is typically reserved for artists who have been performing together for years. Their sound is reminiscent of collaborations you'll find of Peter and Evynne Hollens. While the album isn't necessarily groundbreaking in the contemporary spectrum, the overall project is uplifting and endearing.

The album begins with the title track La La Love, which showcases how well the two voices work together. The track itself is bare, but it is impactful, clean, and demonstrates a small sample of the two's ability to make magic with simplicity.

This characteristic is evident in the opening of All About Us, and in the track Better Place. Both songs demonstrate Scott & Ryceejo's mastery of using soft dynamics to muster up sincere emotions that leave an impact. All About Us plays with this dynamic before offering an appropriate contrast once the drums kick-in mid-song, whereas Better Place is restrained through much of its entirety, culminating in a sweet yet moving finish starting at the bridge.

Much of La La Love is cute and bound to stir up tenderness for anyone listening. But the album also has moments where it departs from the typical lovey-dovey, pop tracks to songs that have a real pulse. Never Enough is one of the shining lights of the project with its incomparable energy and style. This is easily the most contemporary track on the album with its heavy low-end and vocal effects, and the one song I think many will be drawn to.

La La Love is a very cute album. That cuteness happens to be the major factor holding it back — it works for a few songs at the beginning, but the project has a hard time sustaining the listener's interest over ten tracks. I would like to have seen a greater emphasis on diversity in the album. Many of the songs have a Disney-esque quality, lacking a strong contemporary appeal.

Additionally, I'd also recommend working on blending, as well as the phrasing and shaping of the backing vocals. Soctt & Ryceejo are killer when it comes to harmonizing together on a lead, or each individually commanding the solo. But when the backing vocals consist of actual words, instead of syllables such as "ah"s and "oh"s, I start to lose a bit of a connection to the music. A major focus of any a cappella song should be to shape the voices to where they become the instruments they're replacing. And while I know the two are capable of this feat, evident in Better When I'm Dancin', I'd just like for it to be more prevalent.

I believe Scott & Ryceejo have a vast amount of potential. La La Love is a great first attempt and I'm sure will be a stepping stone for some amazing projects in their future.

I hadn't heard of Scott & Ryceejo before I got this album to review, and my guess is you haven't either. They are a couple who like to sing together — so far, unremarkable. Their distinction is that they decided to arrange, record, and produce not just a few tracks, but an entire album pretty much all by themselves. Regardless of what you might think of the result, you have to admire that level of dedication. And the result, I think, is nothing to be ashamed of.

It's evident that both artists are very accomplished singers: performing all the parts from bass up to tenor, and from alto to soprano, respectively, is no small feat. The two voices create a smooth and bright blend, the backing complementing the solo parts in arrangements that are ably written to fully exploit the strengths of the performers. It's really nice.

...Actually, it's a bit too nice for my liking.

Sure, the arrangements are both well written and well performed, but there's little variety in the subject matter amongst the ten tracks. In one way or another, each song could be summarized as: "We're in love and we're really happy together." As a self-identified romantic, I'm always happy when two people have found each other — but the message gets grating after a while. I find it very difficult to listen to more than a few songs from this album in a row, because they're just so similar. And after the sameness has gnawed away at my ears for a while, some relatively minor misgivings are suddenly irrationally irritating. The tracks I rated a "2" aren't badly performed or produced, but I find myself so irritated at the cheesiness that I can't justify a higher rating. I shouldn't get this mad about a bit too much suboctaver, or about the percussion generally being a bit too dense and busy at all times. But when my nerves are exposed, even a small irritation can grow to be painful. And thus, I don't think I'll be returning to this album any time soon.

To be sure, though: I'm not the intended audience. I think Scott and Ryceejo made this album primarily for themselves, to share their love for vocal music and for each other with the world. And to that end, I can only commend them for it!