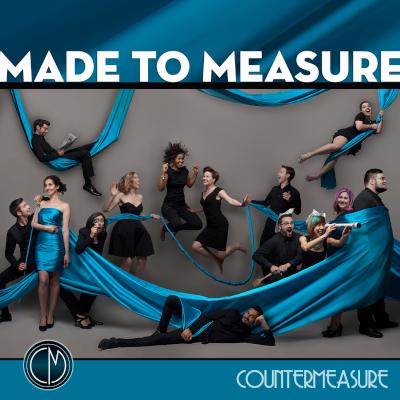 Canadian vocal group Countermeasure boasts the tagline "the new sound in vocal music" on its web page. I'm not sure that any one thing the group does on its second album, Made to Measure, is particularly new — but where the group does innovate is in putting all of these sounds and ideas together on one recording.

There is a lot going on on this album: lots of genres, styles, and sounds. The group jumps from jazz (I've Got You Under My Skin); to musical theatre (Made to Measure); to spoken word (Jump Back); to a song that sounds like a train (no joke, Train the "A" Take); to a creative and unusual Beatles mash-up (I Saw Her Standing There, which includes the iconic bass line of Come Together). All that variation has its pros and cons: there's almost certainly something here for every vocal music fan, but combining all these ingredients into one album makes for a jumpy and somewhat incohesive listen. The songs here are perhaps more enjoyable a la carte than in one top to bottom album listen.

That said, Countermeasure member Aaron Jensen penned five and a half songs here, and is obviously bursting with creativity. The swelling melodies on London Bells are gorgeous, and the slowly swaying music he penned on Life Is Fine works perfectly with Langston Hughes's words. The heavenly whisper of Fox in the Field is a stunning album-closer, and his arrangement of I Saw Her Standing There takes the childlike original and makes it almost unrecognizable except for its lyrics.

The other songs here are all impeccably-sung and impeccably-recorded and would stand alone just fine — they just dilute the overall aesthetic of the album. Maybe that's the group's intent — that they can do a million different things well, even in small doses — but after listening to this album multiple times, I still don't have a good answer to who Countermeasure is. The group obviously has some talented singers, plus talented songwriters and arrangers (Jensen plus J-M Erlendson, who penned the title track), but Made to Measure feels like a jack-of-all-trades sampler platter to showcase all of the group's interests and skills, and that makes it hard to listen to straight-through in one sitting. I'll be flagging my favorite tracks for future listens, but this is likely not an album I'll listen to again in its entirety, despite the obvious talent of Countermeasure.

Canada serves us with hot talents, complete with a filling flavor of diversity and tasty vocal prowess. Before I began listening to Made to Measure, I had to check the liner notes because none of the songs belong on the usual Top 40 Billboard hits. But then, Countermeasure is not the usual a cappella group you see on the corners. As I listened to the album, I began to understand what the group is all about with this almost all-original compilation of Aaron Jensen's arrangements.

Let me first categorize the areas that I feel are noteworthy: sound production, arrangements, and songwriting style. The overall quality of sound production is top-notch and very impressive. All tracks are mixed and produced well, complete with just enough studio tricks to satisfy a musician's ears. The group has a very refined sound and the solo choices are spot on. Takin' It Home welcomes us to the album with a happy positive feeling, and it automatically lures the listener into checking out the following tracks — good job on the the track positioning there. London Bells sounds like a dreamy and relaxing song that could take Wendy and Peter Pan to Neverland.

When it comes to arranging, I love how Jensen is able to deliver a diverse approach in telling the story of each song. He is able to make use of the available resources. To me, the best arranger for any group is their own director — and Countermeasure supports this case. When the director knows his own group's strengths (and weaknesses), he is able to assign specific vocal passages to a certain group member and trust that the singer can actually deliver the desired outcome. Voila! Countermeasure is vocally equipped, and they have a very talented director. Made to Measure (the song) is a perfect example of how each member is aptly utilized in a Broadway style.

Lastly, my impression of the songwriting style is both good (for innovation) and not-so-good (for originality). Not a lot of new songs these days are totally original anyway, so I'll give this some leeway. As a bit of a composer myself, I do a lot of referencing to songs I have previously heard (and that's often the norm). On this album's originals, references to other famous songs are here, but are so well reimagined that only music lovers who listen to all types of music may catch the "reference". Takin' It Home has a bit of a Tightrope feel. Train the "A" Take sounds like a modern upgrade of Albert Hammond's I'm a Train. Jump Back brings me back to Lauryn Hill's That Thing with Elana Steingart, Gianna Antonacci, and Hayley Preziosi's rapping skills being hands-down good.

This album is very enjoyable, even when I was not-so-ready to take on some a cappella originals. The blend of familiarity and freshness is the main brownie point that makes this album a hit to all a cappella fans out there. Thank you, Canada, I'm ready for more Countermeasure, please.

Made to Measure is an album almost only containing original songs. It's a bit sad that this is still worth mentioning, but even if all-original albums were the rule rather than the exception in the a cappella genre, this album would stand out among them — because for several of the songs, I would have bet that I'd heard them before somewhere. That's how good group director and arranger Aaron Jensen's writing is — he has an extraordinary command of a wide range of styles, which he is not shy to show off across the album.

There are also some covers, but they are so creatively reimagined that they seamlessly fit into the flow of the album. One track in particular deserves a mention here — Train the "A" Take is not so much a cover of the jazz standard, but an astonishing deconstruction that is maybe best described as avant-garde vocal jazz. The other covers don't quite reach the same heights; although they are pleasant enough, there are some startling and sometimes irritating style changes in both I've Got You Under My Skin and Lovers in a Dangerous Time.

Bridging the gap between covers and originals is a slow jam gospel arrangement of Langston Hughes's great poem Life Is Fine, which in my opinion still works better as a poem than as a song — but it's a solid track nonetheless. One part that never grew on me was the studio banter at the beginning of the track, which is also found across some other tracks. I don't see any reason for its inclusion on the recording, but I hope the group enjoys listening to it.

Among the original songs, it's hard to single out one standout track — mostly because they are all quite good in their own ways. There's the kick-off Takin' It Home, a fun party track that sets a very positive tone for the rest of the album. There's the very calm and choral closer Fox in the Field, maybe my favorite track on the entire album. Inbetween there is the title track (the only song not penned by Jensen, but by group member J-M Erlendson) which is a classic big band-esque track; the female empowerment hip-hop track Jump Back, complete with a Nicki Minaj-style shouty verse; and the atmospheric, though slightly repetitive London Bells.

The jazz roots of the group are evident throughout every song, with complexly voiced textures and harmonies lending the album some cohesion across its wide range of styles. The production by Jensen and mixing by Kai Koschmider are just as expertly done as the arrangements, always changing to suit the individual track.

Made to Measure is an album that takes a lot of risks, with a largely original tracklist and an often daring arranging style. Those risks don't always pay off — but ultimately, the shortcomings are not enough to change the fact that this is an extraordinary album that aspiring arrangers especially should listen to with care.