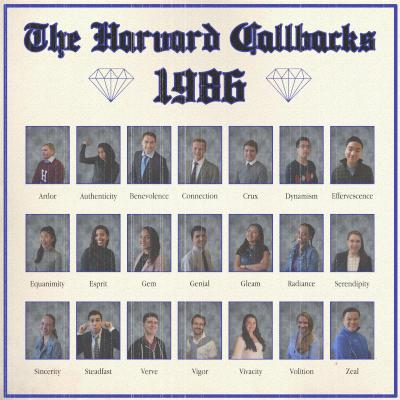 1986 is the Harvard Callbacks' 30th anniversary release. The track list follows the group's usual mix of pop and R&B, spanning over forty years of music (while skipping the 90s). The musicians sing with an easy confidence and comfort with their vocal abilities. There are no forced solos or shaky harmonies. The Callbacks have it down pat, and have put out a solid (if uninspiring) album to mark the three decades of their existence.

There are certain songs that lend themselves well to a cappella interpretation, resulting in numerous covers across the board. Some of these songs enter the collegiate a cappella lexicon and are trucked out for decades. With 1986, we get yet another take on Fix You; Signed, Sealed, Delivered; Toxic; Love Runs Out; Bottom of the River, and more. These covers are perfectly adequate, but offer nothing new or interesting in the arrangement. While that may be great for a Callbacks fan, it doesn't do much for those who have heard it all before.

This makes 1986 background music instead of active listening. The one exception is the opening of How Will I Know, which is stripped down to the soloist and a few women. This spare interpretation catches the ear, as the harmonies join only for certain moments, leaving the soloist to carry the song. It is almost disappointing to hear the percussive whoosh and the rest of the group pile in at the 1:30 mark.

With 1986, the current incarnation of the Callbacks has ultimately done what the group has always done best: pop and R&B a cappella covers of crowd pleasers. The legacy continues.

Harvard Callbacks' 30th Anniversary album —  1986  — is the group's 9th album since the Callbacks' inception. The one word to describe this release is simple: clean. The production is impeccably rich and crispy courtesy of Plaid Productions and their team of talented studio sorcerers that are duly credited in the liner notes.

When it comes to arrangements, musicality, and song innovation, the album is average. It's clever to mashup the familiar rhythmic background vocals with One Direction's What Makes You Beautiful in How Will I Know. To me, Kimberly Onah's performance on this track is also the strongest solo on the album. Toxic's arrangement could have been better without the silly "ching ching", "zhenga ba zhenga", and the random Kesha Tick Tock lyrics which later ends with Your Love is My Drug. The track is rather playful contrary to the seductive effect of Britney Spears' original. I see a trend of mashup culture in the arrangement style, and it's not too bad when done in appropriate instances. Arrangment-wise, my favorite here is Signed, Sealed, Delivered, which is perfectly positioned to end the album with a positive feeling.

Even Fix You is not spared in the mashup parade which I think was an overkill for the song; instead of focusing on the message, it shifts gears in the middle by being mixed with Paradise and Nobody Said It Was Easy. And there's not an attempt to climb up to a glorifying climax in "tears stream down your face..." before the denouement of the song.

I'm in love with the bass sound — it is very clean and anchors the chords of each song really well. Basses do not usually get a lot of attention in an a cappella group. But in this review, I won't miss this chance to give the bass section brownie points. Roses is where they really shine.

Sometimes, there is an issue when recording each voice section one by one (I can only assume that this is how 1986 was recorded). Each singer usually gets their necessary energy from the contagiousness of hearing everyone in their group perform together. The singing style of both the solos and background vocals here lacks the intensity and required passion that is usually heard during live performances. It turns out a bit dry and needs a little push to be on the average energy level. Let It Be, Lean on Me, and Fix You do not follow the trajectory to reach the climax required to give a powerful performance. A bit of studio tricks could have helped, but it still boils down to the general energy given by the performers themselves.

1986 is a mix of good studio production, some missing dynamics, and some poor arrangement choices. I would have enjoyed the album more if it had a focus, a trajectory, a story, and gritting solos whenever needed. The song choices are good and the group sound is not totally weak, but it's a matter of focusing on dynamics and message delivery. After all, a cappella music is not just about tight chords, it's about the emotional impact expressed by the singers and felt by the listeners.

If an attempt was made to condense all my pet peeves about collegiate a cappella into one album, it might end up sounding a lot like 1986. This is not to say that the album is free of redeeming qualities, but the shortcomings are hard to overlook.

An album, to me, is more than just a collection of songs. The choice of songs, and the order in which they appear, is very important — the best albums tell a story just through their structure. 1986, in contrast, reads more like every member got to pick their favorite song, and everything from recent hits to desperately overdone titles is featured, including the Outkast cover Roses that is not only entirely out of place among the other tracks, but even on its own is only remarkable in its total lack of redeeming qualities.

While there's nothing wrong with including current hits like Love Runs Out or classics like Fix You or Lean on Me, these pieces present a challenge to the arranger — they have been done many times before, so the group needs to find a fresh perspective and add their own spin to the song. Unfortunately, the arranging is often formulaic and transcriptive, only rarely displaying choices that elevate the message of the song.

I find it particularly hard to come to terms with the fondness the arrangers seem to have for syllables like "jo" or "sho", which I have never heard used to positive effect. The opening notes of Lean on Me, sung on "jo no dim do", not only sound out of place but actively distract from the song through their artificiality. Just one song later, in Fix You, an unfortunate arpeggio on the word "just" recalls that choice of syllable as well, entirely out of place in the song.

With unfortunate song choices and a lack of unique arrangements, one might hope that at least the Harvard Callbacks sing well — after all, that is the main purpose of an a cappella group. But while the soloists for the most part deliver a solid performance, the backing parts often lack energy and even sound bored at times. This is especially evident in How Will I Know and Signed, Sealed, Delivered, where the energy from the soloists only serves to create a contrast to the dull backing, instead of being elevated by it.

However, some positive aspects deserve a mention as well. The first verse of Whitney Houston's How Will I Know is performed by the soloist without accompaniment — a risky choice, but Kimberly Onah is up to the task. And for all my complaints, Don't Wake Me Up is arranged and performed well.

The Harvard Callbacks are not a bad group, and if they make an effort to choose suitable songs, arrange them meaningfully and sing them with purpose, they are capable of so much more. I'm asking a lot — but in the current a cappella landscape, I don't think that's too much to ask.