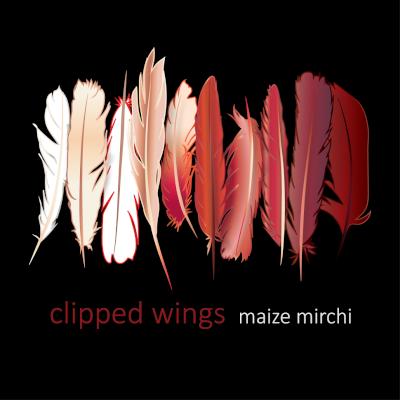 Perhaps the most important thing I can tell you about Clipped Wings, the EP release from University of Michigan's Maize Mirchi, is that it's essentially an "enhanced" (i.e. studio-produced) version of the group's 2016 ICCA set.

I didn't know this initially as it wasn't in the materials the group furnished to us as reviewers, but when I saw the tracklist, which really features only two songs (almost) in their entirety with the rest being snippets, I knew something was up. And a little poking around on the group's website confirmed my suspicions.

I mention this because (a) it may influence your decision to buy what is barely twelve minutes of music, and (b) if you do buy it, or find yourself listening to it, it may change the way you approach the experience.

At RARB, our job isn't really to imagine how this set might have "played" on a stage, but rather to review the material simply as recorded a cappella. And as such, it's not an especially compelling listen. The segments of songs that segue neatly into one another may have been aided by visual cues on stage, but on this recording, they come off as incomplete thoughts rendered sparsely and uninterestingly. One may be able to discern some thematic connection between the opening three selections but it's not especially self-evident and, being a fan of O... Saya from the film Slumdog Millionaire, I was a bit disappointed to hear barely half the song. Worse, that half is offered up without much of an attempt at the flavor that makes the original — by M.I.A. featuring AR Rahman — much more interesting.

When we get to Sia's Bird Set Free and Beyonce's Ghost/Haunted (offered here sans Ghost) — which are separated by an interlude featuring a lovely chordal progression on the word "free" ("originally performed by" artists were not furnished to us either so I'm unsure if this is borrowed from anyone) — we get the best glimpse of how the group tackles a full arrangement of an entire song, and the results are also a mixed bag. That we get first-rate vp is likely as much to the credit of the producers at Liquid 5th, who are known for their gifts with vp sampling and sequencing, and the work here is predictably solid. But beyond that, the bulk of both arrangements are of the homophonic "big block chord" variety, plus the occasional word echoes and/or backs singing in harmony with the solo. Essentially, it's one big solid "pad" with few if any layers that deepen the rhythmic and harmonic texture, and little to no ornamentation, plus the odd studio effect here and there. It's polished and pleasant — and in performance, it won the group their ICCA quarterfinal in the Great Lakes region — but in this format, it's not going to raise your heartbeat much, if at all.

I should also note that Maize Mirchi is a "South Asian inspired" a cappella group, but except for the aforementioned O... Saya, that influence is not felt much on this recording. That's not a strike against them at all but if you were looking for or expecting something with a more palpable South Asian influence, you won't find it on this EP.

This is my first go-round with Maize Mirchi, and while I do think they need to beef up their arrangements, they clearly already have the intensity — and the female soloists — to put together some music that would in fact make a far greater impact. This album is perhaps a lovely snapshot/keepsake for those who competed with the group this past year. For the rest of us, it's hardly a must-buy, but it does make Maize Mirchi a group to watch out for in the years to come.

As luck should have it, this album is not the first time I've heard Maize Mirchi perform these songs, as Maize Mirchi performed these songs as their ICCA competition set. I happened to watch this University of Michigan-based Hindi-fusion group perform at their semifinal. When I first heard this set, I was amazed at how well the story was presented. The arrangements were well performed in a way that let soloists shimmer through and the story stay present. When I started listening to this album, I realized that I was given a chance to hear this musical story again. However, the story feels different now. What I originally thought to be four songs became seven tracks, with the original four songs not as explored as I remembered them. With the recorded release of Clipped Wings, the story is broken out into too many smaller parts that work well enough together, but leave a large number of concerns individually.

Any way you shake it, twelve minutes for seven songs is dangerously little time. There's an inherent risk of ideas not being fully explored, or that an idea is too long but not fully effective and thus a waste of precious seconds. Originally, I believe there was four songs in the ICCA set (Past Lives, O... Saya, Bird Set Free, and Haunted), but these four songs are shortened to be supplemented by extended transition tracks. That's largely what drives some of the moments I truly dislike about this album. Free is an exaggerated transition that could have either been more embellished into a full song or avoided completely. With the tightly knit choral harmonies sandwiched between the empowerment of Bird Set Free and the ethereal drive of Haunted, the transition almost feels choppy. Haunted and Past Lives (Reprise) could be combined into one track, and the transition would be perfectly smooth. I can understand all of the thought processes that went into giving a strong presentation at a competition level and trying to have an array of emotions, but translating the array of emotions into an album is a feat that results in some confusion to the listener if an idea is neglected or overindulged.

However, aside from the issues I have with the flow of the album, there are some amazing moments. Anu Vora and Alicia Kalsi deliver top-notch solos in Bird Set Free and Haunted. Vora gives drive to the ballad, providing raw power in the moments where she stands alone and also when against a wall of sound. Kalsi's style is entirely different. The control she has over her voice lets her begin the song with a haunting aura before exploding in the final chorus. Credit is also due to Deepak Kumar, who arranged the entirety of the album which lets every soloist play to his or her strengths. The album has a wide array of sounds that play to the Hindi-fusion Maize Mirchi is known for. The group branches out and presents its ideas in many different ways, including sneaking in Eric Whitacre's Sleep into the song Free. There's so much going on in this album that I just want more of everything. I want more of the colorful chords. I want to hear more of the amazing soloists. Most importantly, I want every track to be a fully-explored song.

In short, the concept of the album is spectacular, but the presentation is flawed. The overall story arc, ending with the opening track transitioned into a minor key, presents a large number of highs and lows. There are moments of strength and moments of weakness. However, these moments don't always transition well. The transitions are lengthened into individual tracks that don't have enough standalone value and shorten the songs that are the main point of the story. By failing to ever fully explore an entire song and supplementing this flaw with extended transitions that add more ideas than thought resolutions, Maize Mirchi gives a great presentation of ideas that tell a great overarching story, but leaves minimal standalone value to each song.

Maize Mirchi's Clipped Wings is an eargasm of satisfying chords and delightful arrangements. This South Asian inspired a cappella group from the University of Michigan is a bundle of joy to your ears and the presentation of this album is a themed artistic production. It's like a medium-length narrative; each arrangement is positioned to introduce the main tracks just like an a cappella version of a cantata. The best way to experience the album is to play it from track one 'til track seven — in that order. The album schowcases the music of BØRNS, A. R. Rahman, Sia, and Beyonce, but it sounds so fresh that Maize Mirchi owns the innovation/creativity department.

I don't have a favorite track in this album because I love them all. Past Lives begins with an airy, breathy vocal solo in a major key that perfectly preps you to keep on going — the Past Lives (Reprise) equally relaxes the tone to a minor key ending. Delirium is a lovable musical experience and a polyphonic nirvana delivering the listener to O... Saya where the South Asian feel is predominant. The rest of the album is a fusion of western pop and choral music (I'm sure there's some Eric Whitacre influence somewhere in Free).

The next part of the album is focused on the themes freedom and haunting past lives (presumably reincanation). Bird Set Free, Free, and Haunted is the "main event" of the album, complete with adorable solos, punching vocal percussion, and intricate background vocals. It's astonishing how these three songs are seamlessly integrated into the theme. The chord choices are great, especially the ending chord of Bird Set Free where it almost sounds like a movie fanfare.

There are not enough words to describe this release other than suggesting you experience it yourself. There is too much to love in this album: the arrangements, the expressive solos, the impeccable studio effects — all RARB categories are excellent. Also, gapless playback is highly recommended and you're good to go. Maize Mirchi's Clipped Wings is a great a cappella experience in one album. The musical genius of Deepak Kumar, who arranged all of the tracks, will not disappoint — and I beg for more.