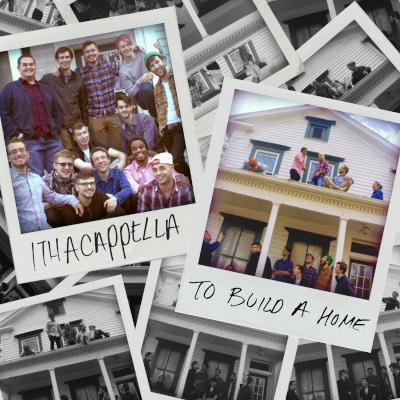 Ithacappella is well known for its innovative stylings in the world of a cappella, and the group brings forth a solid offering in To Build A Home. A brief EP, To Build A Home is truly a very direct way to sell the group's best points: great writing and great voices. That being said, the product itself feels a little rushed, which cuts into the appeal. That's the hardest part of dropping an EP: if you only choose a few songs, they had better be perfect, otherwise even small mistakes stand out massively.

Shut Up and Dance is becoming an overcovered song, and as someone who had a hipster love of Walk the Moon before it hit the radio, I'm a little disappointed in what I get from a group I know to be so creative. I do love the live audience effects, but the arrangement doesn't pop the way it needs to. That "rushed" feeling comes into play heavily in the bridge. The tuning is flat-out wrong, but it sounds like a post-production error more than the unlikely possibilty of a sloppy group. Giving them the benefit of the doubt, Sing would have been a much better opener; it's got a beautifully redesigned lead in, and Paul Tine hits the solo out of the park. It's my second favorite track, next to the obvious top dog: Madness.

I could listen to Madness over and over again for days. It's beautiful. It's everything I want when I talk about groups getting innovative with arrangements. The layering perfectly leads each section into the next, it sparkles and keeps you guessing, but even that doesn't compare to the absolute cherry on top that is Dan Purcell. Will somebody get this man his Best Male Soloist CARA? I can't imagine what other performance could match this emotion and delicacy. Having listened to him back from his first solo on The Party Upstairs, through the amazing product that is Stages, I can confidently affirm that Purcell is one of the finest soloists I have ever heard, and that his musicality will be missed from this group. Even the botched reverb topping his high note doesn't take away from the gem that is this performance. If you only can afford one song from this album, get Madness.

The biggest drawback to this EP is the song choice: too many ballads. (Sittin' On) The Dock of the Bay was a good choice to keep the tempo switching, but the cover doesn't get the right energy. I want more blues and soul, and all it's giving me is power and rock; it might have worked to boost the energy if the song itself didn't have such deep roots in a different style. It's well done, so it gets the "4", but I'm not a huge fan of the direction. The very human percussion keeps this track's score high and actually saves a few other songs as well.

Overall, I'll say "Well done, gents." It's not the finest release Ithacappella has done, but it's top tier material.

Since I joined the a cappella community over a decade ago, the name Ithacappella has been synonymous with high-quality all-male a cappella. The group's newest EP is an interesting mix of imaginative covers, innovative missteps, and impassioned solo work. To Build A Home may not be that life-changing release you've been looking for, but it is most certainly a solid offering from a consistently strong collegiate group.

In this reviewer's estimation, the heart of this EP is where its strength lies. Sing begins effectively with an inventive slow introduction before progressing into its familiar feel, but it ends rather abruptly. Fortunately, it progresses into Money On My Mind, a high-energy cover with smooth solo stylings from D'quan Tyson over many background swells imagined by arranger Dan Purcell. This is followed by a new (Sittin' On) The Dock of the Bay which starts rather metronomic for a free section but settles into a powerful groove, led by a dynamic solo performed by Mark Farnum.

The momentum, however, is broken by a six-minute cover of Madness. Ithacappella endeavors a fresh take of the Muse standard with an extended introduction and unique middle section with a rhythmic ostinato, or repeated passage. The trouble is that these sections meander somewhat and lack propultion from one section to the next. In the case of the rhythmic section, the chords do not discernably change where they do in the original. While there is great merit to reharmonizing chords, the lack of chord changes makes an already long song more static. This leads to a climax that is no more profound or interesting than the original, resulting in somewhat of a letdown. Dan Purcell's impassioned solo work is a bright spot for the track, but listeners may be lost somewhere along the lengthy journey that is track five. Despite the beauty and musicality of the title track, To Build A Home, repeat listenability suffers from two six-minute epics, the latter of which closes the album on a slow, subdued note.

Some arranging choices are questionable, ranging from the larger conceptual choices of Madness to individual awkward syllable choices and occasionally exposed background parts in Shut Up and Dance. But in general, the musicality and energy of Ithacappella are impressive, and recording engineer Ted Trembinski elicits great sounds in the studio from individual group members. The mixing work from David Longo and Angela Ugolini is top-notch, and the seamless mastering of multiple engineers' work by Dave Sperandio is, as usual, the gold standard in a cappella.

Ithacappella's enduring legacy continues with its newest EP. There is a great deal of variety to sample in To Build A Home, particularly a smattering of strong solo voices that are certainly worth a listen.

Ithacappella's To Build A Home far transcends the first impressions I got from it. Even after weeks of listening to this release, it still astounds me how good this album gets in spite of its opening moments.

The first song, Shut Up and Dance, holds just about every criticism I have for this album, so I'll start with those. Johnny Shea's solo does a fine job energizing the song, but far too often it is obscured by a very busy arrangement. Background parts get sloppy, the vocal percussion can feel a bit spitty and hollow at times, and the whole experience is simply very vanilla.

But everything changes once the next song, Sing, plays. Background vocals are interesting while not detracting from the once again awesome soloist. While vocal percussion still holds some of the same issues, the issues are far overshadowed by the incredibly fun and varied rhythms produced. Most importantly, however, is that Ithacappella knows how to remain intense during quiet moments exceptionally well. Here is the point at which I realized that this album has style.

Money On My Mind isn't quite as daring as Sing, but it avoids just about every pitfall I described that Shut Up and Dance fell into, and it's still really fun. Here is the point at which I realized that this album has consistency.

Listening to (Sittin' On) The Dock of the Bay is when it hit me that I was going to give this album an excellent review. It earns doubly every praise I gave to Sing, while by no means trying to be the same song. Mark Farnum gets a special shoutout for his stellar arrangement and smooth solo, both of which he really makes his own. Here is the point at which I realized that this album has personality.

And then Madness opens with 80 seconds of nothing but eerie "oohs", "hmms", and whistling overtones. The entire song is completely devoid of the original's defining "madness" echoes. The instrumentation is different, and at times the harmonic progression completely altered. And all of this works brilliantly. David Allen does a fantastic job centering the arrangement around an alternative emotional color for the song, in a way that suits Ithacappella incredibly. At the same time, Dan Purcell reinterprets the emotion behind the solo to better fit both his own voice and the different arrangement. Once again, every praise from the previous songs carries over into this one, while taking it a step further. Here is the point at which I realized that this album is daring.

Ending the album on a ballad is risky, but the song To Build A Home successfully turns this album into a complete idea. Here is the point at which I realized that this album knows where to end, simultaneously leaving me satisfied as well as wanting more.

Overall, I can't sing this album's praises enough. Obviously, a 6-song album has an easier job holding my attention than a 20-song release, but that just makes conciseness another strength of To Build A Home. And the fact that I'm still listening to this album for fun, weeks after deciding on my scores, speaks for itself.

To Build A Home also streams on Spotify.